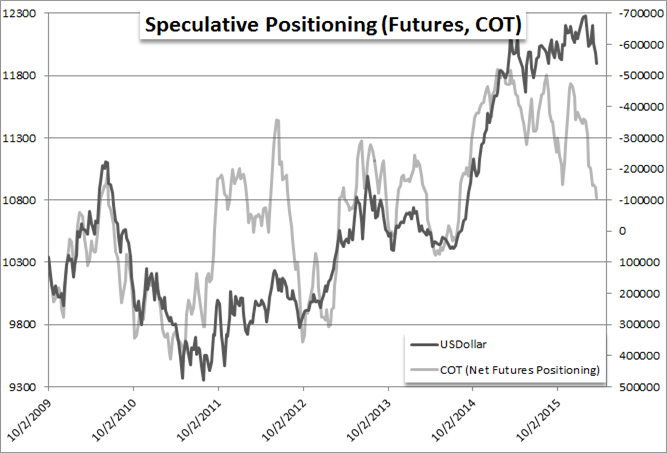 The US Dollar took a dangerous tumble through the first quarter, throwing into doubt the currency’s ambitions after more than four years of advance. The extreme contrast between the Greenback and its global counterparts has notably moderated over the past months and that in turn has cooled the bullish fervor for the currency. In fact, the benchmark’s fundamental supremacy started to falter around March of 2015 when forecasts for growth, revenues and rates started to fall short of the overzealous speculative projections. As the economy cooled, corporate profits ebbed and the Federal Reserve cut its rate forecasts; the inflated Dollar premium started to evaporate.

In turn, the speculative chase for long-Dollar exposure cooled – as can be seen in the net speculative futures positioning below. Heading into the second quarter, the perceived advantage to the world’s largest currency and economy will likely remain under pressure. However, where the USD tempo may ease; its fundamental advantage is unlikely to falter. This will intensify the importance of and reaction to key event risk, bolster volatility and likely sabotage efforts to sustain major trends.

While the Dollar has maintained its bullish course, momentum started to flag approximately a year ago. Following a record-breaking 9 consecutive month climb for the ICE Dollar Index, the currency stalled and corrected through April and May. A key source of this slip was a souring of the market’s rate forecasts. In an effort to acclimate the market and temper the impact normalization would have on the markets, the Federal Reserve committed to a communications plan that emphasized forward guidance as an active tool. Yet, as their tone softened and the first rate hike (‘liftoff’) was expected to be pushed further back; the market applied the brakes to the Dollar’s advance.

On a streak of seemingly consistent ‘downgrades’ for the central bank’s rhetoric and outlook, the market developed a near permanent sense of skepticism. We can see this incredulity in the chart below which shows the FOMC’s year-end-2016 outlook for interest rates (from the ‘dot plot’) generated from the median forecast amongst the members issued at the quarterly meetings compared to the market’s expectations derived from Fed Funds futures used to hedge the risk of rate changes. Clearly the market has persistently discounted the central bank’s expectations – and for good reason as they have had to downgrade. However, after the first hike in December, the Fed’s downgrade on rates to only 50bps (two hikes) in 2016 and market forecasts hitting zero; there is little room to further discount. Even the dovish members of the central bank believe 50 bps is reasonable. A hike is likely in 2016 and June is considered a conservative time frame. Given the market’s positioning, the ‘surprise’ of a hike could leverage a much larger reaction than an extended pause. 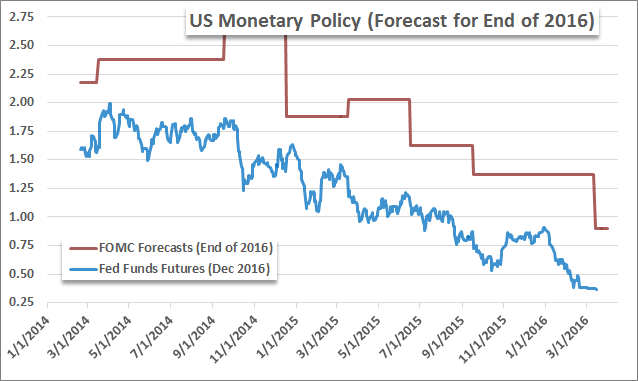 Remember: This is a Relative Market

Many FX traders come from other asset classes that are heavily biased towards buy-and-hold or long-only mentality (such as equities). However, everything is FX is relative. If we were to consider the Dollar to its own historical circumstances, it would be a stretch to consider the Fed’s position as ‘hawkish’. We have only realized one rate hike, future rate hikes are heavily contested and the massive balance sheet inflation through multiple QE programs has been maintained. That compares to periods when rate hikes were not only successive but moving at much larger clips than the 25 bps standard. Yet, we aren’t comparing the Dollar to itself. Rather, we establish its value relative to other currencies.

When we look at the circumstances surrounding the benchmark currency’s most liquid peers, the contrast is significant. The ECB and BoJ are in the midst of large quantitative easing programs and have adopted negative rates. The PBoC and SNB are threatening to move further into the unorthodox. Even the central banks of the currencies that have stood as carry pilots in the past (AUD, NZD and CAD) are still undermined by the warning of possible further rate cuts moving forward. If these counterparts continue to suffer greater distrust – whether through monetary policy, economic performance, financial risk, etc. – than the US, the Dollar will likely find incidental demand in fundamental valuations. 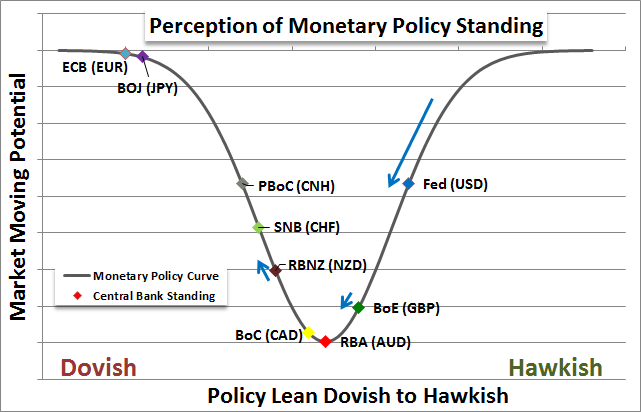 On the Off-Chance of a Panic

A final fundamental word for the Dollar on perhaps the most underappreciated aspect of its value: The US Dollar represents the world’s largest economy and financial system. This position has led global investors over the past years and decades to impart upon the currency a presumption of a robust haven status. In this most recent global economic phase, the Greenback has deviated somewhat from this role as its early shift to normalize monetary policy has imbued it with something of a ‘carry trade’ (or risk) appeal. However, where the currency has slipped amid periods of risk aversion as the front-running carry trade is unwound; this unusual position will not hold up against a definitive de-leveraging of risky exposure. If the assets of the global financial system that have an orientation to growth and higher return tumble in concert, the intense risk aversion will quickly restart the Dollar’s haven status. Below, we see the Dow Jones FXCM Dollar Index (USDollar) overlaid with an FX Volatility Index aggregate. 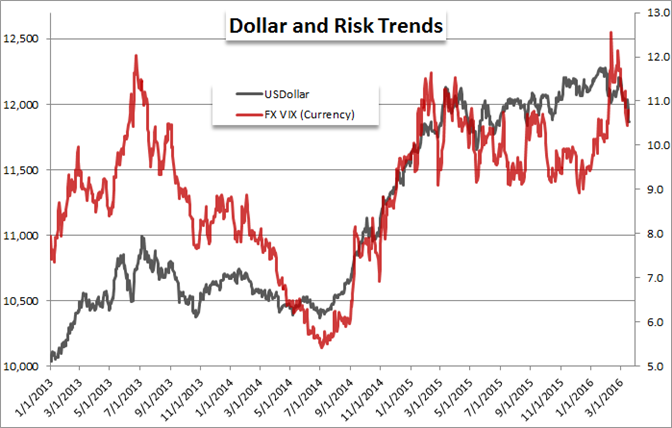 Technicals: Grinding into a Top

Let’s first review the Q1 2016 technical outlook. We wrote 3 months ago that “conflicting signals abound (uptrend weakening but still an uptrend). Triangle breakout objectives are 12488 and 12690. The first measurement intersects uptrend resistance in late February. The second measurement intersects uptrend resistance (the higher one that was resistance in March and April) in late March. Focus is on these levels (specifically the uptrend resistance lines) as long as price is above the median line (blue line) that provided support in May, August, and October. Weakness below the median line would probably trigger sharp weakness until the May low before the next rally attempt.”

Fast forward 3 months and the USDOLLAR index never managed to sniff its breakout objectives. First, the failed breakout is bearish is its own right. Second, price action from the May 2015 low ended up forming a wedge which completed in late February. The wedge support is basically the same line as the median line (in blue). As long as price is below this line (which is now seen as resistance), focus is on the May 2015 low. Support that could derail the bearish case is the parallel that extends from the September 2012 low (see the blue circles). Strategically, resistance for bearish trades is 12040 and 12131 (December low and year open price). The latter level intersects the median line (former support) and the ‘new’ trendline that extends off of the January and February highs at the end of March. Only a weekly close above the median line would argue for a broader resumption of the multi-year bull. Finally, it’s worth noting that one of the most seasonally bearish periods of the year for the buck is from late March until the 3rd week of April.