The Dollar surged after the Federal Open Market Committee (FOMC) announced that it would keep its target range on the benchmark lending rate unchanged between 0.00 and 0.25 percent. The hold wasn’t what rallied the currency, rather it was the remarks and tone of the statement that accompanied the decision. Where the market and economists were highly skeptical that the central bank would be able to follow through on their September forecast that 2015 would be the appropriate time frame for a hike (13 of 17 members believed that to be the case), there was plenty of room for surprise. 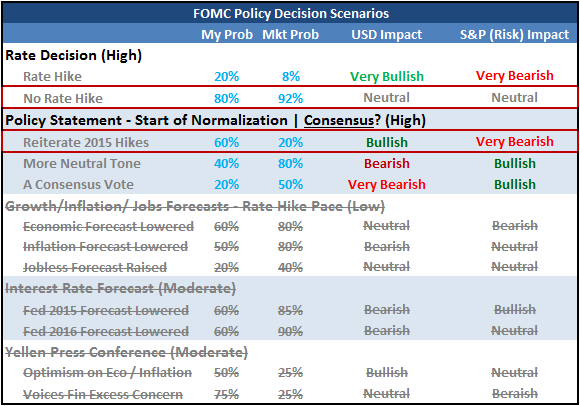 As this was not one of the ‘quarterly’ meetings that offer updated forecasts on GDP, employment, inflation and rates as well as Fed Chairwoman Janet Yellen’s press conference; the focus of the anxious financial system would fall squarely on the quick bullets pulled by the financial media from the statement. After those digestible remarks were incorporated, market participants would move to the full rundown of the statement itself.

The Headlines and The Statement

The fast take from the market was taken from the highlights made by those media outlets that received the news beforehand and keep it on embargo. Their key highlights included the following:

These are the baseline remarks that we expect through the event. And, for the most part they didn’t change materially. This is itself slightly ‘hawkish’ itself as the growing skepticism from the market side would insinuate a more dovish review of conditions and the future would be appropriate. That is a modest rebuff to that cynicism.

There were more tangible and disquieting highlights to be found in the statement. One such surprising remark would come on the topic of international risks. In September, the Fed and specifically Janet Yellen herself voiced distinct concern over the risks from international winds. In the October FOMC statement, the intensity of that concern – and its subsequent influence over policy decisions – softened. The statement removed a line that global developments may restrain growth. If that is due to an improved view of global trends, this could be temporary relief. If it is a permanent decision to minimize foreign pressures in policy decisions, it would carry a greater permanence.

What was perhaps more surprising – and thereby market moving – was the direct suggestion that December was still open for the Fed to consider a rate hike. In the statement, the language concerning the eventual tightening shifted from “In determining how long to maintain this target range…” to “In determining whether it will be appropriate to raise the target range at the next meeting”. This may seem semantics, but forward guidance is the only policy tool central banks have nowadays short of a hike or introduction of new stimulus. And, the Fed wields the tool aggressively.

After the statement was absorbed by the market, the implications of a more-hawkish-than-expected policy lean were quickly assimilated into price. The Dollar and Treasury yields rallied, while products more closely associated to hedging future rate changes adjusted to the higher implied yield. According to Fed Funds futures, the probability of a hike at the December meeting rose sharply from below 35 to near even. 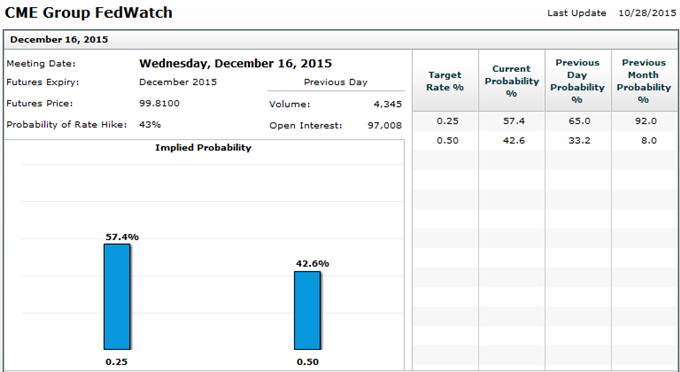 In the FX market, the chance of a hike before the end of the year carries a significant amount of weight. In fact, all that is needed to offer the Greenback an advantage against most of its most liquid counterparts is to keep open possibility that the next move will be a hike – regardless of time. That is because the majority of its peers are still proactively easing policy. The ECB and BoJ are contemplating upgrading their quantitative easing (QE) programs. The commodity currency central banks (RBA, RBNZ and BoC) are considering further rate cuts. And, the People’s Bank of China is still trying to staunch its own economic/financial bleeding with its own policy options. 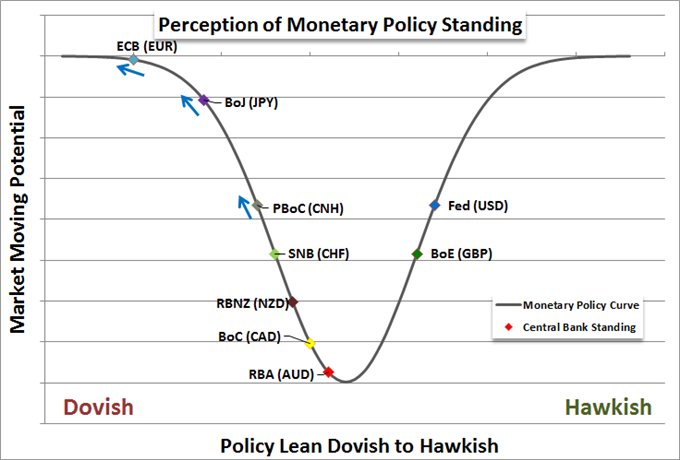 Where the Dollar’s general monetary policy view may be ‘modest’ under normal circumstances, it looks far more impressive when held up in comparison to the projected lower rates seen in contrasting regions. A great example of the divergence in policies can be seen in EURUSD. Last week, ECB President Mario Draghi remarked that they would consider expanding the stimulus program they introduced in March come the December meeting. Looking at the EURUSD’s price action, we can see the influence this has. 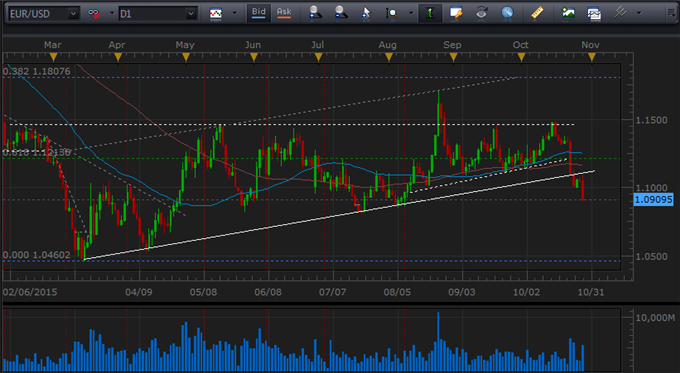 However, as remarkable as the contrast can be between the Fed and its counterparts; there is a considerable premium afforded to the currency already for its departure from the pack. In other words, the market has ‘priced in’ a considerable amount of hawkishness and lifted the Dollar for it. To continue its advance in a meaningful way, we will need to see skepticism significantly reduced or realize the first rate hike. This conviction conflict can be seen in the USDollar which continues its general bullish bearing, but is reticent to overtake its 12-year highs set back in March/April when there was still a consensus for a mid-year 2015 hike. 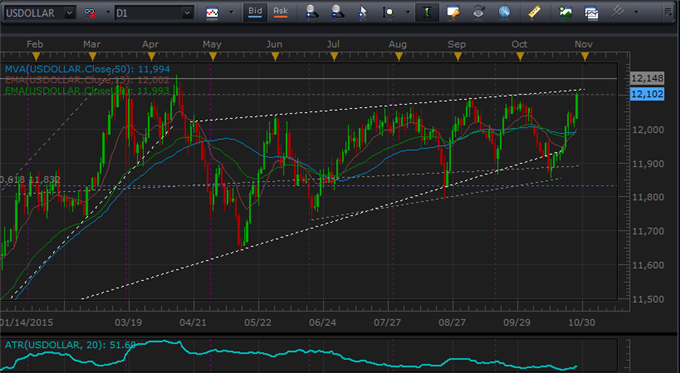 One particularly interesting break from the surprise reaction to the central bank’s persistence towards normalization was the ‘risk’ response. There is little doubt that a considerable amount of optimism in the buoyancy of capital market asset prices is attached to the promise of a sizable safety net from the Fed and other monetary policy authorities. This is why we have seen US equities transition from a consistent bull phase to consolidation and abrupt declines through 2015 as QE3 gave way to speculation of a rate hike. That said, this warning didn’t keep the S&P 500 down through the end of the session and in afterhours trading. Perhaps hope from the ECB, BoJ, PBoC and others will compensate. Perhaps the market is confident about underlying economic conditions. Perhaps this is an effort to squeeze out as much time and return as possible before the inevitable change is made. Time will tell. 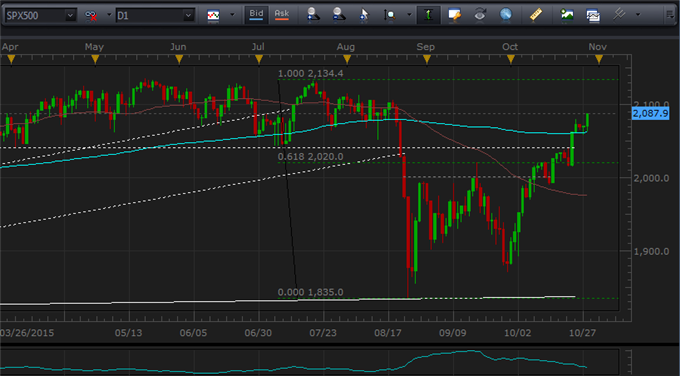