What Does Yuan’s Devaluation Mean for Chinese and Global Markets?

It is not unusual to see stimulus coming from China, indeed the People’s Bank of China (PBoC) and other authorities have pursued a number of efforts over the past months. Yet, that didn’t prepare markets for the move the central bank made on Tuesday. A devaluation of the Yuan was an unexpected return to old tactics, and the move clearly caught the market by surprise.

Open an FXCM account to Trade the Chinese Yuan / Renminbi.

At 1:18 GMT, the People’s Bank of China announced that it was lowering the Yuan reference rate 1.9 percent (increasing the ‘USDCNY fix’ to 6.2298) – the biggest change since the effort was adopted to liberalize exchange rate movement on the currency. Considering the Yuan reference rate has trailed market based USDCNY trading – the PBoC allows a band of 2 percent – this leveraged the market high (see below). 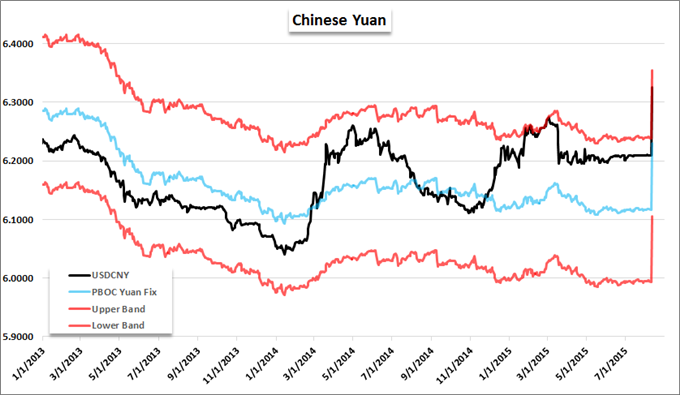 Looking at the daily chart of USDCNH (CNH is the offshore currency while CNY is onshore), the response to the news was dramatic. A nearly 3.6 percent surge from Tuesday's open to the day’s high was the biggest move since the currency began trading in 2010. Notably, the surge of over 2,000 pips was severely higher than the previous 10-days’ average trading range of around 70 pips.

On a weekly scale, the move still does not scale properly. This move has easily cleared the slow congestion pattern of the past four months and the gradual rising wedge back to the early 2014 low. 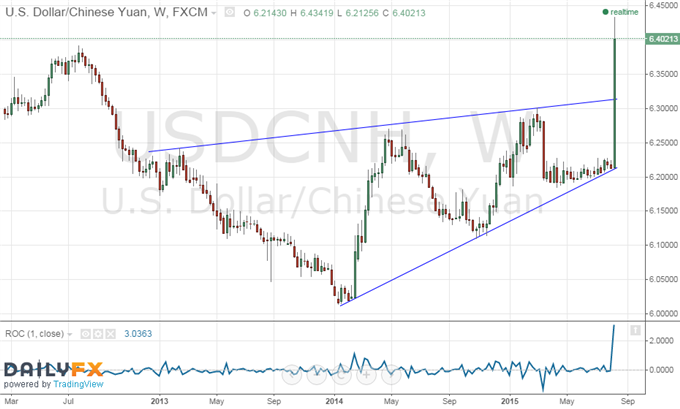 As dramatic as the PBoC’s move and the market response was, it is important to recognize that it is not unprecedented. In the past, abrupt changes in the exchange rate were frequent and were far larger in magnitude (see below). However, the sizable Yuan devaluation occurred back in 1994. Monetary policy objectives back then are very different from where they are today.

Over the past decades, China has progressively attempted to open its financial system and economy in order to better integrate into the global system. Through the 1990s and early 2000s, the country kept its currency stable and low in order to prevent outside financial excesses from leeching into its system as well as help the competitiveness of its important export sector. In 2005, alongside other economic liberation projects, China shifted to its current ‘managed exchange rate’ model with modest adjustments since – such as the firm peg during the Great Financial Crisis. Hence, the move to devalue is seen as unusual.

Why Did China Devalue

Under President Xi Jinping, China has embarked on an objective to transition its economy from one dependent on exports and outside influence to one that finds more expansion through consumer spending and other internal factors. This directive has come hand-in-hand with an effort to open up the country’s financial system to better secure its place in the global economy and to use the outlet to help prevent systemic imbalances that occur as a side effect of a closed system.

The ambitious transition, however, exposed China to unforeseen developments like the Great Financial Crisis, moderation of global economic activity in recent years and the competitive monetary policy efforts adopted by other major monetary policy authorities. Major quantitative easing progress adopted by various central banks (Fed and BoE earlier in the post-2008 slump, BoJ and ECB more recently) have seen notable spillover effects in exchange rate movement – easy transition with free-floating currencies. Yet, for the Yuan, little depreciation was realized. In fact, despite the Dollar gaining across the board in anticipation of a return to Fed rate hikes, the Yuan was still trading higher when benchmarked to 2012 (see below).

Add to this exchange rate pressure, the recent extreme volatility in local equity markets as well as a rapid cooling of credit and lending; and more broadly influential efforts than rate cuts, short-sale bans and equity liquidity groups were needed.

Is this a One-Off?

Shortly after the abrupt Yuan reference rate change was announced, the PBoC made a point to state that this would be a “one-off” depreciation. It is likely the case that the policy authority has no intention of revisiting this method as it backtracks on years of change in policy approach. Furthermore, the exchange rate can quickly turn boon to burden should global commodities prices start to rise once again and further saddle the economy.

As complicated as this tool’s influence is on the system, though, China is not likely to completely abandon it. With a range of levers available to it and without the buffer that open markets offer, the PBoC and other officials will look to implement whatever means they have to fight emergent problems.

Will a Weaker Yuan Help China?

There is considerable debate about whether a weaker currency will truly help China. Some relief will no doubt be felt for export-centered businesses. Yet, this move does not carry the same weight it did decades ago when the economy was more trade-focused – not the least because the magnitude of the exchange rate adjustment is a fraction of previous efforts’ size.

In other stimulus efforts adopted in 2015, the objective was to deliver funds to certain parties – local governments, banks, home owners, new investors – directly. This approach will carry vague knock-on effects down the line. Looking at the USDCNY exchange rate compared to Chinese GDP (see below) does not show a distinct causation effect. 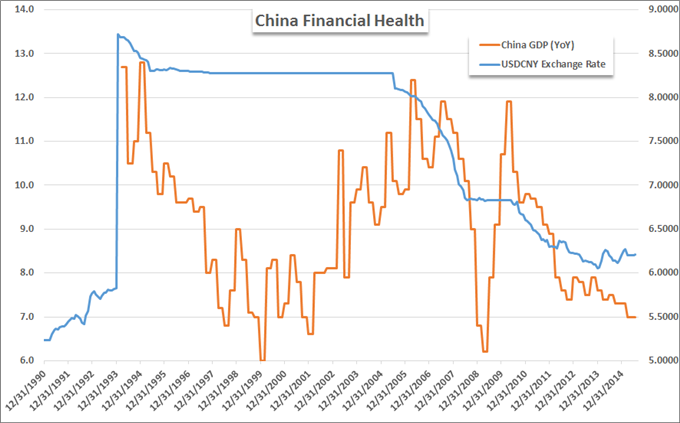 What Does the Yuan Drop Mean for Global Markets Short-Term

Rate cuts or liquidity infusions into China’s financial system don’t span much further than the country’s boarders thanks to financial hurdles still in place. However, an exchange rate adjustment is far more distinctly a unilateral policy approach. For trade partners, the support to China’s economy – which may translate into growth and thereby demand for foreign-made goods – is offset by the cost increase that ensues as side effect of a more unfavorable exchange rate.

Below, we can see the impact that the decrease in the Yuan had on the Australian Dollar. Australia’s largest trade partner is China, which consumes the vast majority of the country’s commodity exports. With a sudden raw material cost hike for Chinese manufacturers on a weaker local currency, FX adjustments to economic implications are realized. 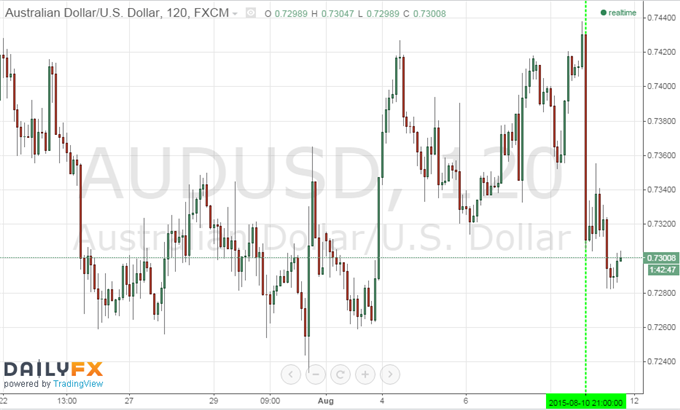 What Does the Yuan Drop Mean for Global Markets Long-Term

The long-term implications of China’s devaluation are difficult to read because of the complicated system of China’s financial markets and economy. As the world’s second largest economy, however, a failed growth effort would certainly be felt in global activity.

Alternatively, there is another systemic strain that this move will contribute to: a growing competitiveness in monetary policy – some would term this ‘currency wars’. Many Developed World central banks have adopted easing policies that seem more directed to devaluing their local currencies than to specifically manufacture change in local growth or stability factors. The ECB last year remarked last year that it believed a EURUSD exchange rate above 1.4000 was an economic problem via deflation pressures. Commodity central banks (RBA, RBNZ and BoC) have all noted at one time or another these past few years that their currencies were ‘overvalued’ in a soft effort to encourage devaluation. At one point, the BoJ directly insinuated that its large QQE program was targeting a depreciation of the Yen, they backtracked after the G7 cried foul.

China has been no slouch in trying to keep pace, but its efforts have fallen short consistently. If currency depreciation becomes a popular tool, it will significantly escalate the competitiveness. Central banks like the RBA will likely have to respond with easing. Furthermore, plans to tighten amongst the Fed and BoE in the near term may be delayed if these moves come with unforeseen and ill side effects (exported disinflation, financial instability, retaliation, etc). 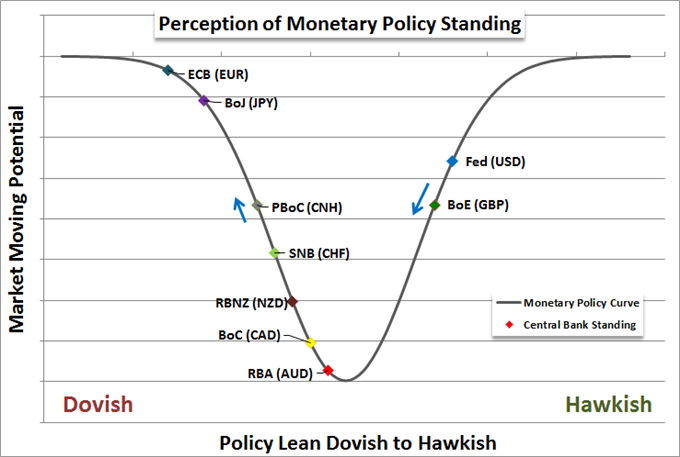