US CPI Increases in July, Core CPI Now 17 Months Above 2%

This morning brought the release of CPI numbers for the month of July out of the Untied States. This release takes place amidst a backdrop of considerable concern as a recent fall in headline inflation has pushed the FOMC away from the hawkish pattern exhibited in 2018 and into a dovish position in 2019. The big question at this point is how dovish the Fed might get in the remainder of this year and markets have already built-in heavy expectations for another cut in September and, likely, another 25 basis points of softening in December.

At the core of this quandary is inflation in the United States. After coming very close to 3% in the summer of last year, headline inflation has experienced a brisk fall as last month produced a 1.6% print. Core inflation, however, stripping out food and energy, has been considerably more stable, with 16 consecutive months above the Fed’s 2% target. Last month produced a 2.1% print, and this creates a bit of difficulty for a Central Bank expected to move towards a more-aggressive stance of softening.

This morning brought another print above the Fed’s 2% target, extending the streak in Core CPI to now 17 months above 2%. July Core CPI printed at 2.2%, the highest level since January. 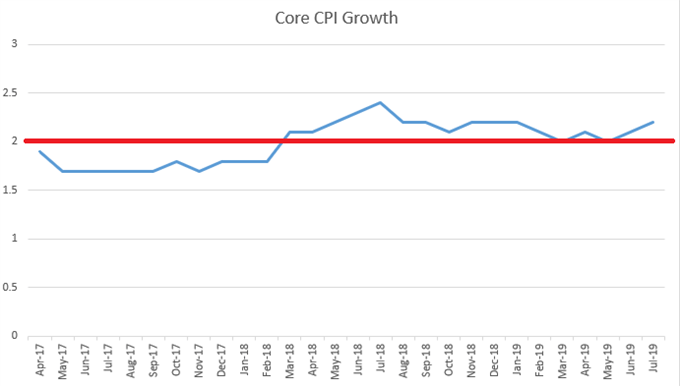 Headline inflation, however, remains a bit less positive. Headline CPI spiked to 2.9% a year ago and this came despite the fact that the Fed was continuing to hike rates. But as the year progressed, inflation slowed and by the time we got to December, headline CPI had already pushed back below the 2% level. This year has so far been marked by more struggle, as February saw CPI fall down to 1.5% and this hasn’t pushed back above 2% since.

This morning brought another below-2% print with headline CPI for the month of July coming in at 1.8%, rising from the 1.6% print from last month and beating the expectation for a 1.7% release.

US Headline CPI Since January, 2017 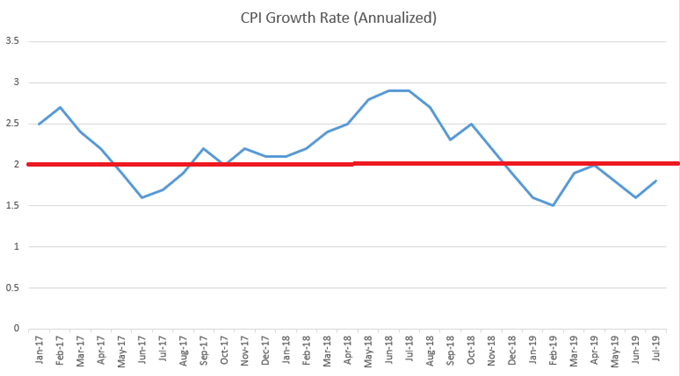