Can The DXY Turn It Around After a Rough Start to 2017? See our forecast to find out!

Wednesday appeared to be a day of retracing Tuesday’s large moves with one exception. Canadian Dollar weakness continued as USD/CAD traded at its highest level in over a month after the weekly EIA numbers in the US showed that Gasoline Stockpiles rose for the first time in 9-weeks. USD/CAD was supported by the retracement higher in the USD and will look to Friday’s CPI for further direction. However, there remain signs that USD weakness could persist despite periods of sellers taking the day off.

Another theme worth watching is the positioning and technical shift in Sterling. While Wednesday saw the price retrace over 100-pips from Tuesday’s high, the pause in GBP/USD may be just that, a pause. There were a lot of options traders who were short Gamma (rate of change in the difference between the price of Sterling to the corresponding price change in Sterling options.) The sharp rise in Sterling could cause a positioning shift that would add momentum to the Bullish technical structure that could see Cable make a run for the 1.30/1.35 range if USD weakness persists.

For further insight on Cable, we can align the short-squeeze on long-term short positions to what we’re seeing thanks to IG Trader Sentiment. Specifically, the number of traders net-short GBP/USD is 7.4% higher than yesterday and 24.6% higher from last week. Remember, we look to trader sentiment as a contrarian indicator that favors trend continuation against the majority of retail positioning. The fighting of the move higher in Cable may indicate we’re about to see a continuation higher in Sterling that could align with a further breakdown in the FTSE100.

Lastly, it’s worth noting that the stability in USD may find favor for those trading EM. AfterEM’s best quarterly performance in seven years, some Hedge Funds are looking at the eventual unwind of the Fed’s balance sheet as a likely indicator that we could see EM weakness even if the path of Fed Rate hikes are not seen as steep as they once were expected to be.

Interested In Seeing How Retail Traders’Are Exposed In Key Markets? Find Out Here ! 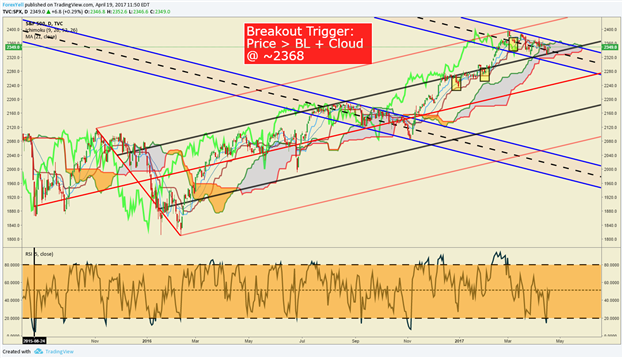 Thursday afternoon will bring back-to-back BoE Governor, Mark Carney speeches when he travels across the pond to Washington DC. Given May, traders will likely be all ears to see if Carneyopens up about how the outcome of the June 8 vote could affect the BoE’s monetary policy stance. First, Carney will give a speech in Washington DC at 11:30 ET at an Institute of International Finance event followed next by his attendance and speech at the Bank of France Event also in Washington. 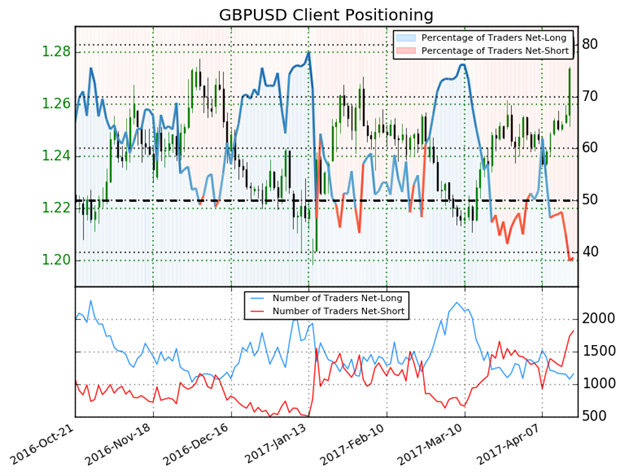 We typically take a contrarian view to crowd sentiment, and the fact traders are net-short suggests GBPUSD prices may continue to rise. Traders are further net-short than yesterday and last week, and the combination of current sentiment and recent changes gives us a stronger GBPUSD-bullish contrarian trading bias. (Emphasis Mine)