- The middle of the month promises continued attention on politics, but mainly outside of the US, the Brexit negotiations and the Italian debt saga.

- Q4’18 US growth expectations are starting to take shape, and the October US CPI and retail sales reports this week will offer insight.

- Retail traders remain mostly net-short the US Dollar, leaving more upside ahead as yearly highs are less than 0.25% away for the DXY Index.

If there was any sense that the Bank of Japan may try to unwind its QE program, that Q3’18 Japanese GDP release should squash those hopes entirely. Due in at -0.9% annualized, Japanese GDP is due to turn negative for the first time since Q4’15. Likewise, with the GDP deflator due in at -0.1% from +0.1%, there will be some concern that inflation pressures may be fading again (Japanese National CPI was +1.2% (y/y) in September, still off the yearly high set in February at +1.5%). While weak growth readings will be bad for the Japanese Yen, they may prove positive for risk appetite as the prospect for ongoing easing by the BOJ rises.

Inflation in the UK is due to remain depressed from its earlier yearly highs, even if a slight rebound in price pressures are due. Headline inflation is due in at +2.5% from +2.4% (y/y), and the monthly reading is due in at +0.2% from +0.1% (m/m). Core CPI is expected to have stayed on hold at +1.9%. At the policy meeting at the start of November, the Bank of England’s Monetary Policy Committee continued to suggest that policy would not change until after the Brexit deadline had passed (March 2019), meaning the weight of policy-sensitive data has less of an impact in the near-term; Brexit developments are far more important. That said, signs that inflation is moderating should be neither a positive or negative catalyst for the British Pound, especially as both core and headline inflation remain between +2-3%.

The next batch of inflation data for October will show that both measures of the US Consumer Price Index are above the Federal Reserve’s medium-term target of +2%. Headline CPI is due in at +2.5% from +2.3%, and Core CPI is due in to hold at +2.2% (y/y). Coming on the heels of November FOMC rate decision, these readings will reinforceexpectations set by policymakers another 25-bps rate hike is coming in December. However, given that a December hike is already 78% priced-in per Fed funds futures, it would seem that the November US CPI release will only have a limited impact on markets; even a miss will leave a minor footprint.

Australian employment only increased by +5.6K in September, and for the most part, traders have been paying attention to data elsewhere. With the unemployment rate set to tick up slight to 5.1% from 5.0%, the Reserve Bank of Australia is simply looking for more evidence that the labor market remains a source of stability, even if wage growth continues to lag expectations.

Nevertheless, uneven economic data and global trade tensions ensnaring China and the United States, two of Australia’s largest trading partners, are weighing on the RBA’s ability to change policy; real wage growth trends aren’t strong enough to provoke a rate hike any time soon. Currently, rates markets are only pricing an insignificant 1.7% chance of a rate hike at their next meeting in December and a 23% chance by July 2019.

Consumption is the most important part of the US economy, generating nearly 70% of the headline GDP figure. The best monthly insight we have into consumption trends in the US might arguably be the Advance Retail Sales report. In October, according to a Bloomberg News survey, consumption slumped with the headline Advance Retail Sales due in at +0.5% from +0.1% (m/m). Conversely, the Retail Sales Control Group, the input used to calculate GDP, is due in at +0.4% from +0.5% (m/m). Growth expectations should be supported coming out of the data, even if Q4’18 US GDP is set to slow further from its peak in Q2’18 US GDP. 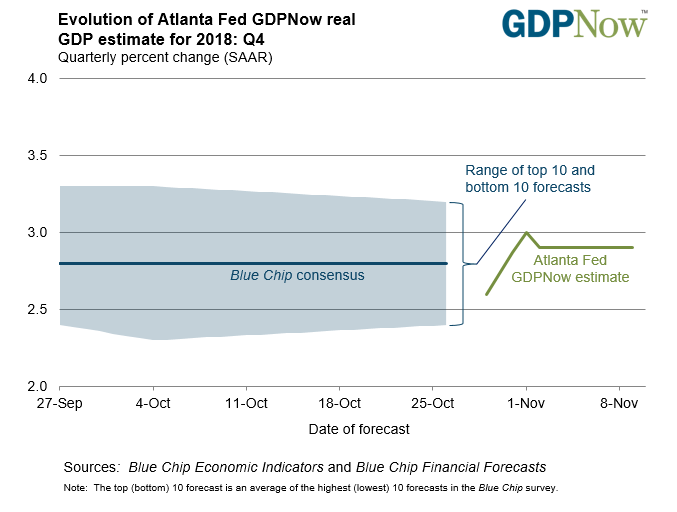 Based on the data received thus far about Q4’18, the Atlanta Fed GDPNow forecast is looking for growth at +2.9%. The next update to the Q4’18 forecast will be released after Friday’s US economic data.

Read more: Markets After the US Midterms: Charts and Themes to Watch