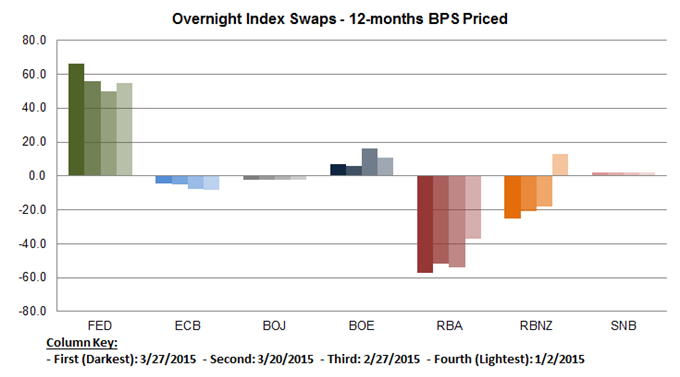 Top Events this Week Include EZ CPI, Canadian GDP, and US NFPs

In the days ahead, the market has a chance to refocus its attention on two of the major drivers of Euro weakness in 2015: persistently low inflation in the Euro-Zone; and the sustained improvement in the US labor market that is driving a wedge between ECB and Fed policy expectations. The data due between Tuesday and Friday have the chance to help markets re-anchor prices

Is the global inflation cycle turning? Perhaps not quite yet. Previously edging up from -0.6% y/y to -0.3% y/y in February, the price level in March is expected to retreat yet again, although at a slower pace of -0.1% y/y. However, according to a Bloomberg News survey, core CPI (excluding food and energy) is expected to remain constant at 0.7% y/y. Now in the third week of sovereign debt purchases, investors will likely use these readings to paint a broader picture of the economic state thanks to a weaker Euro and lower energy costs; while in the background, competing signals have emerged between Germany and Greece regarding the state of debt negotiations.

The Bank of Canada has forecast a +1.5% growth rate for Q1’15; analysts however remain skeptical. Previously at 2.8% y/y, the annual growth rate is expected to slow in January, as lower oil prices were not fully mitigated by a weaker Canadian dollar, nor did they parlay into greater spending on behalf of consumers. In fact,Canadian retail sales fell subject to a broad based decline in January, dropping by -1.7% m/m. Seemingly unfazed by a potential setback, the Bank of Canada expects activity to pick back up in the second half of the year. Only on a significant deviation (+/-0.2%) from the expected headline of +2.4% y/y would the Canadian Dollar see meaningful progress.

In the week prior to the release of ISM Manufacturing data, the February report of orders for US durable goods declined by -1.4% m/m according to the Commerce Department. Perhaps the news of weaker spending in February lends credence to the March data estimates, which are calling for a drop from 52.9 to 52.5 for ISM Manufacturing. Market participants will likely pay special attention to the New Orders and Employment components of the index ahead of Friday’s Non-farm Payrolls and Unemployment release.

The labor force outlook remains mixed in March. With growth forecasts in the US downgraded for the first quarter, the number of additional jobs added is expected to narrow from 295K to 250K. However, the unemployment rate is expected to remain constant at 5.5% as jobless claims fell to 282K last week. Likewise, jobless claims below 300K have been commensurate with headline NFPs around 250K. Nevertheless, a slowdown in job creation eases inflationary pressure, which is of concern to the Fed as annual inflation rests at the neutral 0.0%. A significant beat in the labor data – especially if the unemployment rate drops – would boost the US Dollar amid rekindled rate hike expectations, which have been pushed back to December 2015 per the fed funds futures contract. 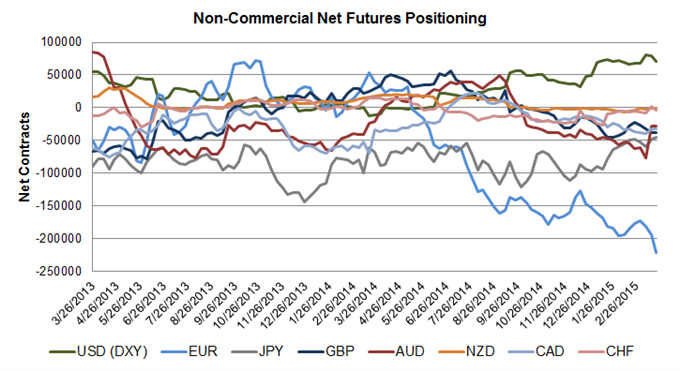