As the kids return to school for the fall semester, will DJIA return to work and make a move? Any move!

For the past month, we have seen US30, a CFD which tracks the DJIA, trade in a fairly tight range between 18,250 and 18,665. The Fed has tried to induce more of a two way thought process for near term hiking of interest rates. That chatter has barely moved the expectation for a hike in December 2016, though it does rest at its highest level near 51%.

With the summer season fading, there is an increased chance the low volatility environment fades with it. From a technical perspective, the pricing pattern in DJIA looks as though we may see a dip towards lower levels. Some areas of interest include 18,375 and 18,250. If prices remain above these 2 levels, then that favors a strong bullish outcome towards 19,700 and possibly higher.

A move below 18,250 doesn’t mean you call in the dogs and put out the fire. It may imply a different pattern at play. So we’ll reassess other higher probability patterns on a move below 17,800.

The 17,800 zone is identified by drawing a support trend line starting in February 2016. 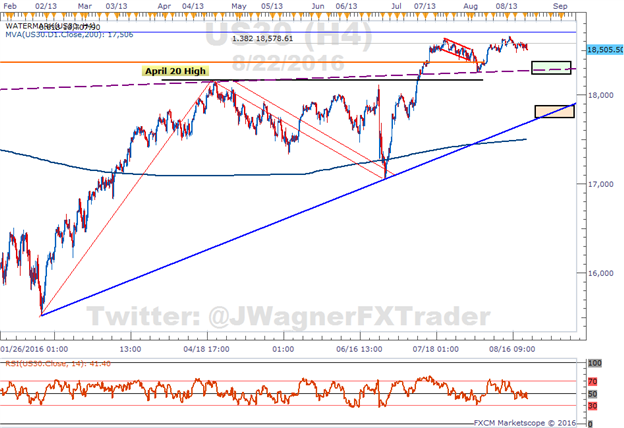 See how price behaves near the 3 levels identified above in real time (18,375, 18,250, and 17,800) by watching GSI. GSI is a big data indicator that compares the current price action to previous patterns in the market. The figures on the chart illustrate how many of the previous patterns moved higher and how many of them moved lower. That can give you a sense of what has happened previously.

*Keep in mind that just because it has happened in the past doesn’t mean that it will happen again in the future.

Learn more about GSI and see the GSI charts here.

Bottom line, don’t let the near term noise distract from the medium term patterns. The medium term outlook remains for higher prices as we have been bullish DJIA since June 29 towards 19,700. Therefore, we’ll await lower levels to position towards the higher prices so as to generate a better risk to reward ratio.

Learn how leverage affects trading results in our Traits of Successful Traders research.