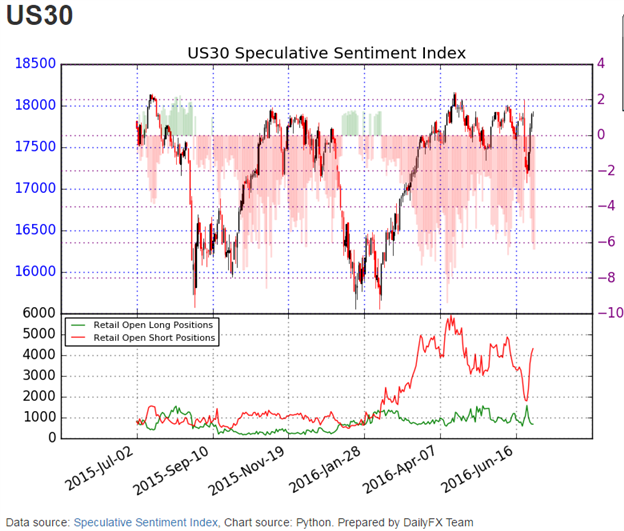 A 2 day sell off of nearly 6% from last Friday to this Monday in the Dow Jones Industrial Average has led to a Brexit bounce reclaiming most of the collapse. In a week where the world witnessed a historic vote and many were fearing the worst, the fear appears contained. It was a vote of confidence (or lack thereof) by the people of UK in the EU experiment, but UK has yet to formally file the divorce papers to leave. Without a government in UK as Prime Minister Cameron resigned, the papers probably won’t be filed until a replacement government is formed which likely takes place in Q4 2016.

Therefore, at the moment, US equities don’t appear concerned about the drama in Europe. We outlined in Wednesday’s post how a break above the post Brexit high of 18,167 in US30, a CFD which tracks the DJIA, would have us continue as a strong bull. Prices are very close but haven’t quite made it to this break level.

SSI is a contrarian tool where you want to do the opposite of how traders are positioning. In this case, more traders piling in short would have us lean towards a bullish breakout.