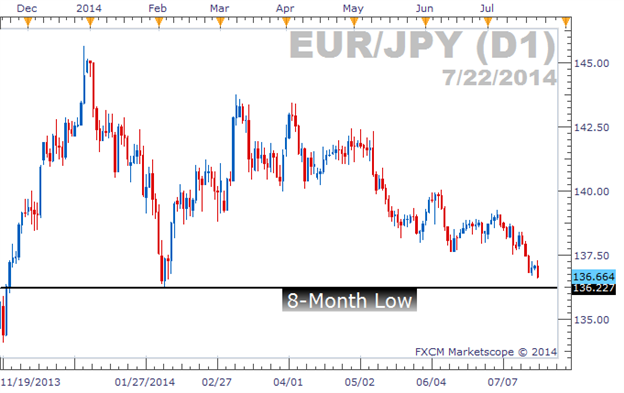 Across the board, the Euro has been one of the weaker currencies in the past couple of months. This is especially true when paired with the Japanese Yen. The EURJPY cross is approaching levels that have not been seen in over 8 months, and it is not showing any sign of stopping. Today, we look at the case for EURJPY bears.

Since the March high of 143.78, the EURJPY has fallen to a low of 136.58. A 5-percent decline in as many months, which is a substantial move with respect to currencies. As a trend trader, I am naturally drawn towards large moves like this, so the EURJPY has caught my eye.

The next major level that the EURJPY needs to breach to reinforce this downtrend is 136.23, the February low. If we see a daily closing price below 136.23, it could be an opportunity to short this pair. The chart below shows the EURJPY hovering precariously above this potential support level. 136.23 could act as major support like it did in the past, but a break would be significant.

While recent price moves led me to this pair, retail sentiment has added quite a bit of confirmation to a potential sell trade.

The Speculative Sentiment Index is my favorite Forex tool of all. If you’ve never used SSI before, you can quickly get caught up to speed by reading My Favorite Trading Tool, How to use the SSI.

The story that sentiment is telling us about EURJPY is a compelling one. After almost all of 2013 featuring a negative SSI, 2014 has seen a significant shift to a positive SSI. The inverse relationship between SSI and price can be seen in the historical chart below. 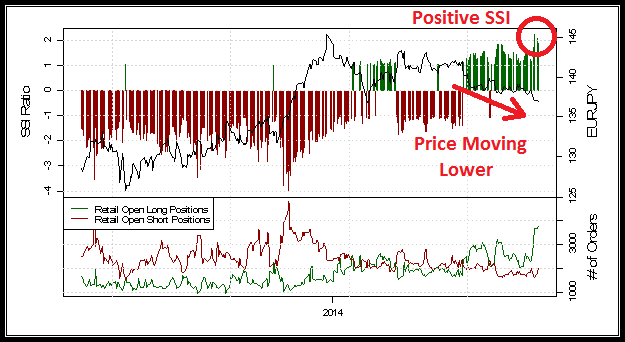 During the long periods of negative SSI, we saw EURJPY moving up; but now that SSI has flipped into positive territory, price has started to move down. If SSI remains positive or becomes more positive, this adds fuel to the bears’ EURJPY fire. I expect SSI to continue to grow at least until EURJPY reaches 136.23. There are most likely many traders waiting to “call a bottom” on the EURJPY and will buy as it approaches this key price. It is only when that support level is broken that you will see the retail herd thinned out as their stops are hit.

Just like every trade, our exit strategy will determine whether we make or lose money, and how much. So we need to figure out a profit target if and when this break occurs. I would normally turn to the most recent support or resistance level for guidance, but the last major support level beyond 136.23 appears around 131.00 (500+ pips away). I want to place a smaller target. So for this situation, it might be a good idea to use the Fibonacci Expansion.

The Fibonacci Expansion tool can be found at the top of FXCM’s Marketscope charts by clicking the drop down next to the Fibonacci Retracement tool button. When we draw the Fib Expansion between the December 2013 high, the February 2014 low, and the March 2014 high, we see the 100% expansion at 134.33. 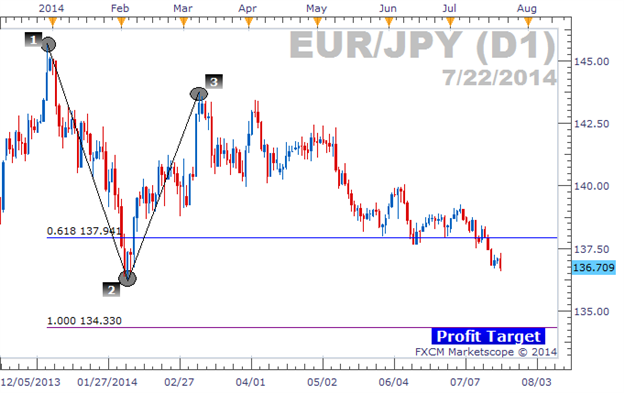 This profit target would give us 150-180 pips of potential profit on a short EURJPY position opened after a confirmed break of 136.23. Using a 1:2 risk-reward ratio would place our stop anywhere between 75-90 pips. If you are not familiar with the concept of a risk-reward ratio, check out our free video course on Money Management which includes a free risk calculator download.

And Now We Wait

It is now a waiting game. We don’t want to sell the EURJPY prematurely. If we see it break to an 8-month low, however, it could be an opportunity. To trade the EURJPY risk-free, download a Free Forex Demo account today.

Start your Forex trading on the right foot with the Forex Fast-Track Webinar Series. This 4-part, live webinar course is the disciplined Traders’ Fast-Track to the Forex Market. Topics include:

This course is completely free, so sign up or watch on-demand today.