Long-Term Chart Indicators on AUDUSD Point To One Thing

There has been a lot of excitement around the Australian Dollar and specifically, the AUDUSD for most of 2014 so far. The latest Commitment of Traders (COT) report from the US CFTC shows that leveraged players continued to buy AUDUSD in the week to Tuesday April 22. This was the 6th week in a row that they have been net buyers. What’s more, the positioning between large speculators and commercial hedgers are at 52-week extremes which tip us to the fact that something is on the horizon and longer term indicators may be telling us what that could be. 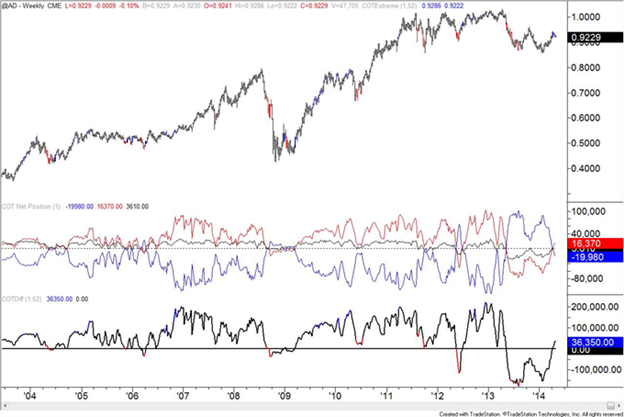 Courtesy of Jamie’s Article , COT Positioning is Extreme in GBP, AUD, and Crude

The Value of Long Term Indictors

Analysis and trading are two completely different things. Trading off weekly indicators is not recommended but they can help you view where the path of least resistance may lie. Today, we’ll look at Ichimoku, long-term polarity points on the chart, and stochastics. Together, these tools can help us see that we’re at a critical juncture on the chart showing that the path of least resistance on AUDUSD may very well be to the downside.

This week aligns a lot of key economic data for the US Dollar which has been searching for a bottom of late. While we may not find the bottom for the US Dollar and could push lower, a handful of key technical indicators are showing that momentum on the bullish AUDUSD run is hitting a wall. The first indicator that looks specifically at momentum is Slow Stochastics is in dangerous territory for AUDUSD bulls.

The chart above shows that another potential corrective rally could be running on fumes. The highlighted section shows the lack of follow through as slow stochastics top out. Another weekly chart that should bring caution is the Weekly Ichimoku Chart.

This chart starts when AUDUSD bottomed in 2008. You’ll notice after the peak in 2011, AUDUSD has continued to slip. What’s more, a critical level was breached that is a highlighted rectangle on my chart. That box shows an intermediate top before pushing higher in 2009-2010, then caught a corrective low in late 2011 before seeing some action again around late 2013-present. What’s key is that this box that has been pivotal on the chart alight in the area that we recently pushed lower on, 0.9400.

There are a few other tools like Fibonacci Time Cycles and Elliott Wave that show a key move in the Aussie is approaching. Either way, you need to manage your risk to make sure that if this trade doesn’t pan out, you have margin left over for the next move.

The AUD Outlook for Summer 2014

Today’s article has looked at Weekly charts. Indicators on weekly charts are often respected more than intraday charts as they take into account, large amounts of data. Whether that’s true or not, you can see that AUD is either going to be bouncing off resistance or breaking through which would bring about a major move. You've likely heard of the phrase, "sell in may and go away." This phrase has surprising merit but what's more, is that the USD & JPY often out perform other G7 currencies during this time frame as well which could also put downward pressure on AUDUSD.

Now that you're familiar with the overriding technical developments on AUDUSD, feel free to try this information out on a FREE Forex Demo Account with access to multiple markets.

Signup for this free “Trade like a Professional” certificate course to help you get up to speed on Forex market basics. You can master the material all while earning your completion certificate.