-USDOLLAR firmly in the top spot as the strongest currency

During this past week, market participants were provided with a couple of surprises. First, the European Central Bank cut their target benchmark rate 25 basis points to 0.25%. This shocked the Euro towards broad based weakness as investors shun a lower yielding currency.

Secondly, the US jobs report on Friday was a positive surprise and above expectations. This fueled speculation that the Federal Reserve would taper their Quantitative Easing purchases sooner rather than later.

As a result, the Euro to dollar exchange rate was under heavy pressure towards the end of the week. That pressure caused the exchange rate to crack below an upward sloping trend line that has been in place since July 2013. (See EUR-USD chart below)

The USDOLLAR gained not just against the Euro. The Greenback is breaking through a significant resistance level which is the main reason why it shows up as the strongest currency in our strong and weak analysis.

When comparing the price of the exchange rates relative to their 200 period Simple Moving Average, the Greenback changed trend the most and is now considered the strongest currency according to the Strong & Weak analysis. 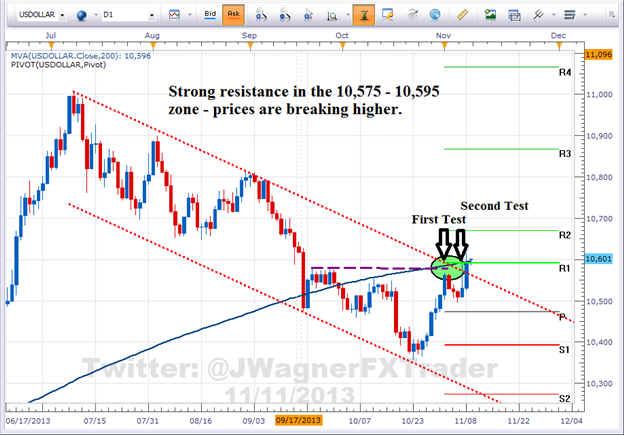 In our last report, we identified a significant resistance level in the USDOLLAR at 10,575.

Due to the confluence of resistance near 10,575, there should be a reaction at that level. If the value of the USD were to strengthen above the 10,575 strong resistance, then that would likely confirm a medium to longer term bull market is kicking off.

We did get that reaction on November 4 as prices traded up to 10,565. Prices were immediately rejected as they met resistance.

Last Thursday, prices re-tested 10,575 and were rejected again. However, after this 2nd rejection finished selling, its low ended up higher than the first. So on Friday November 8, when a 3rd retest of 10,575 resistance was made, prices started to break higher through it.

As a result of several technical patterns, the Greenback appears poised to move towards a medium term bull run. Therefore, begin to position towards USD strength. Now, where do you enter? 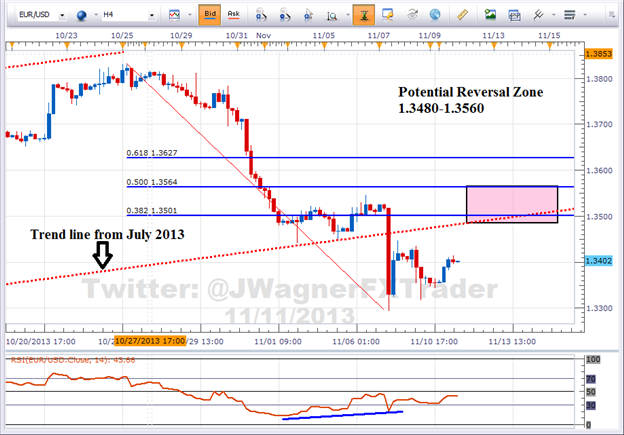 The Euro to USD exchange rate can offer some insight. After the exchange rate sold off hard due to the two surprise news releases last week, it is likely we’ll see a consolidation higher prior to resuming the bear trend. Using Fibonacci retracement levels and trend lines look for the EURUSD to drift higher towards 1.3480-1.3560. If prices are successful in reaching those levels, then we can look to add to our US Dollar buy trade from November 1.

(To learn more about timing trades with the Fibonacci retracement tool, enroll for this free Trading with Fibonacci course. In it, we teach how to apply the Fibonacci tool to the chart and how to time entries. The course will take about 15 minutes to complete.)

Since we anticipate the Greenback to see a broad based rally we will take a diversified approach and buy the USDOLLAR against a basket of currencies.

We recommend risking less than 5% on all open trades. As a result, risk less than 1-2% on this basket so you have additional capacity to take on other trades.

Want to keep on top of the Dollar’s move and what fundamental news is pushing it? Join DailyFX on Demand where you can receive real time analysis of your trading ideas, real time SSI, and bank research of how funds are flowing. FXCM clients receive a discount.