- This is a trading education article based on the findings of the DailyFX Traits of Successful Traders series.

- This is the first of a multi-part series on the topic of risk management.

There are few areas of trading that are as important as risk management. Regardless of which market a person is trading, or how they’re looking to do it – the consequences of poor risk management almost always lead to the same inevitable outcome of losses, draw-downs and, eventually, margin calls. Many times, this proves to be an obstacle too insurmountable for many new traders, and this is likely one of the primary causes of trader attrition in markets around the world.

Why Win/Loss Percentage is Not a Panacea

Point blank: You’re never going to be able to tell the future. Don’t take this personally, because the same can be said for pretty much every other human being on the Planet Earth. Even Nostradamus had a spotty track record that only looks a bit more attractive with a combination of hindsight and retrofit. But when traders come to markets, they often want to think that trading is like most other competitive venues in this world that revolve around win/loss ratios. If you ask if a baseball team is any good, or if a soccer team is performing well – you’ll usually look at their win/loss ratio to get a good idea of how well they’re doing. A team ‘above .500’ would be winning more than they lost, and this would usually be considered at least somewhat successful.

In trading – this really doesn’t matter as much. Because the size of the wins or loses also contribute to the trader’s endeavors. In a soccer match, you can lose 19-0 and it still counts as only one loss. But in trading – if you lose a lot on one really bad trade, well you can’t just wipe the slate clean when you start a new game tomorrow. You have to make that back to start ‘winning’ again. One really bad trade can wipe away the gain from 10 or even 20 really good ones. So you can be winning 90 or 90% of the time and STILL be looking at a net loss.

So, first things first: your analysis can’t predict the future nor can you, so don’t build a trade plan based around that. Instead, expect to be wrong; because whenever you’re trying to forecast the future based on imperfect information, this is unavoidable and rather inevitable. So rather than running from the inevitable, trying to hide from the prospect of statistics, set your stops at a level where, even if after-the-fact, you’ll be thankful that your stop took you out of the position before even more damage could’ve been done to your account.

Where Should Stops be Set?

When lining up any trade idea, assume that you might be wrong. Don’t expect that during the trade you’re going to develop some internal intuition that will tell you to close the position early, saving capital in the process. Once you get in the trade, you’re mentally attached to it and your cognitive bias may not allow for the clearest of thinking. So, rather than tangling with emotional or psychological challenges to managing a trade that you already have on the line, set your ‘risk levels’ at the outset of the trade so that if that price is hit, you’re proven wrong and you can walk away with confidence that you did the right thing by managing your risk at those levels.

This is where we can begin to incorporate analysis into the mix. In most cases, traders looking to buy want to put their stop underneath a support level. As long as that market remains trending-higher, there should be some degree of respect for support. If support breaks, well, now we have the fear that the up-trend may not last for much longer; and this is when traders holding bullish positions would likely want to investigate bailing out of the trade anyways. On the chart below, we focus in on a recent bullish trend in GBP/JPY to illustrate the prospect of using support levels (via price action swings) for stop placement. 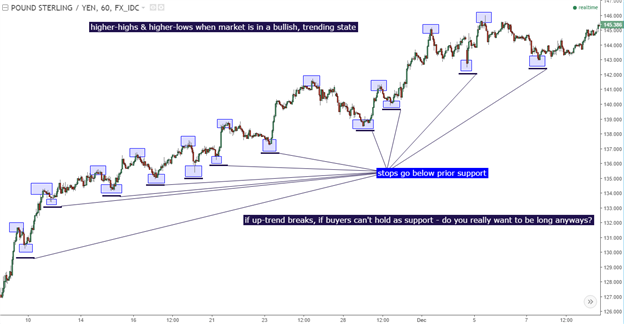 There are a plethora of mannerisms for identifying support and resistance levels. Some of the more common and widely-followed are psychological levels (round numbers), pivots, and Fibonacci retracement levels. Each of these can bring benefit to the trader; but one more proactive manner of identifying support and resistance revolves around looking at what’s happened in the recent past via price action.

If prices in GBP/JPY are dropping like a rock, and then all of the sudden prices stop dropping, and then begin to move up; only to see another influx of sellers take price right back down to the same point that they’d stopped dropping at previously – and then they stop dropping again; well – we have support. Maybe the reason new buyers showed up was because of a Fibonacci level, or perhaps we’re at a ‘round, psychological level’. The ‘whys’ are significantly less important than the ‘what’, and price action helps you see the ‘what’ here.

Traders want to put their stops on the other side of this level; so that long positions aren’t taken-out until prices fall-below the support zone. On the chart below, we look at a recent example in USD/JPY. 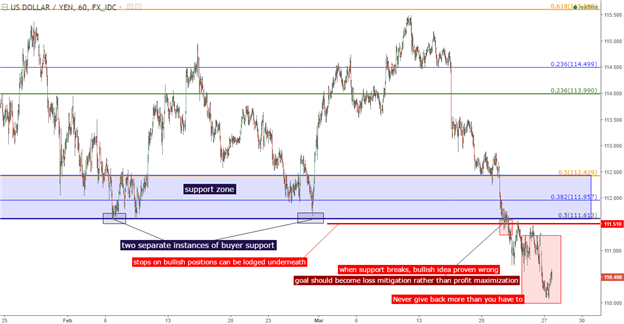 Once a trader is comfortable with their stop placement and initial risk management, more attractive topics like profit targets and trade management can be investigated, which we’ll delve into with future articles.

But the objective of loss mitigation, stop and risk management, and control of down-side must be explored before the profit side of trade management can ever be investigated.