Article Summary:FXCM Trading Volume on the USDCAD has been quiet but other technical developments could show the long-term uptrend is about to resume after an apparent repeat of a price correction pattern. With SSI dropping, sentiment traders are favoring upside.

The FX market is recognizing a familiar pattern in the USDCAD that mirrored a set-back before new multi-year highs ensued. The push back in USDCAD’s uptrend has come alongside a nearly 30% rise in US OIL. This article will show us what to look for on the chart while adding sentiment and volume analysis to see if the trend is ready to resume.

The Inverse Correlation of Oil & USDCAD

Utilizing FXCM’s real volume indicator has been very valuable for USDCAD traders. The value came in showing that volume spikes on down days near the 1.2800 level favored the correction playing out as it ended up pushing ~900 pips lower.

Traditionally, traders can look to volume to see what direction price is moving when volume is at its highest. On the other hand, high volume on down-days near prior highs understandably makes traders suspicious and can precede declines like you see on the chart above in March through mid-May. On the bigger picture, moves against the larger uptrend tend to be discredited. Discrediting counter trend moves aligns with the favorable trend following approach. Volume helped Krisitan Kerr in mid-April look for a move to 1.2000, which ended up developing. Once you learn how to use volume, you can find insights similar to Kristian.

In last week’s article, we discussed looking at volume as a proxy for enthusiasm or social proof of a move. The lack of volume towards prior support on USDCAD shows that very few traders were willing to push this pair lower and that the next move would join the seemingly inevitable path higher as favored by the BoC.

When considering the chart of USDCAD, it is easy to see that the trend is up. However, it has paused twice, March to July in 2014 and the current set back. On the chart above, you can also see that volume has depleted over the recent candles as price tested the 1.19 handle. This combination of a paused trend with lower volume on the downside extension begs the question, what is a trader to do?

In short, traders can look for a major breakout to the upside that is matched with volume hitting relative record levels. A development where price breaks resistance and volume moves higher would complement the idea that the larger trend is resuming.

Complementing sentiment and volume is the technical analysis approach. Technical analysis looks for potentially repeatable patterns that can provide an edge, so long as risk is managed. The chart above shows USDCAD tracing out two nearly identical counter-trend moves that both fail near the 38.2% Fibonacci level.

If the pattern from 2014 does repeat, a trader could expect a push to and through the 1.2830 highs from March & April in USDCAD. To help a trader validate that belief of new highs, volume can be utilized. Specifically, a trader can look for volume to push near 2014 highs on a move higher showing that investors are endorsing the move. Naturally, if price breaks down to new lows on higher volume, then a trader would likely be better off exiting the trade until clarity develops. 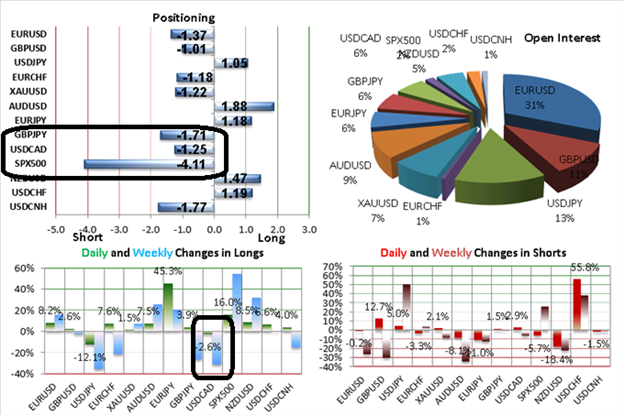 The Speculative Sentiment Index, or SSI, is a contrarian tool where we look to take trades that are opposite of its reading. So during times when SSI is positive, we would look for sell trades and when SSI is negative, we would look for buy trades. Typically, a reading above 1.5 or below -1.5 are seen as statistically significant and increases the need to be on the watch out for breakouts occurring against retail crowd positioning. However, relative positioning is also significant.

Relative positioning refers to the daily and weekly changes in short and long positions. An aggressive adjustment of greater than 20% shows the retail trading crowd is attacking a move. Because this is a contrarian indicator, and emotional extreme as shown by large percentage changes in short or long positions is similarly as effective as the net ratio difference. USDCAD has seen a reduction of long positions by 31.9% below levels seen last week signaling a sentiment extreme. 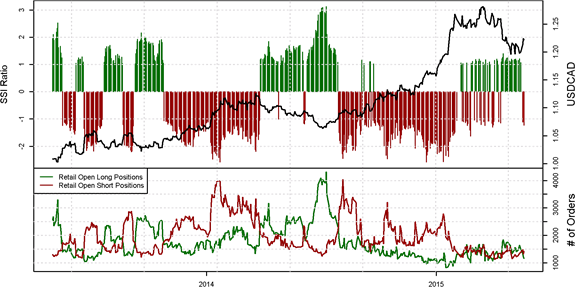 We use our SSI as a contrarian indicator to price action, and the fact that traders are aggressively reducing their longexposure adds to the potential signal that the USDCAD may soon continue higher. You can see in the chart above, due to the strong trend a negative SSI has correlated to higher moves, whereas a positive SSI has been present in trend corrections. As a testament to the Speculative Sentiment Index, you can notice that a relatively aggressive negative SSI seems favorable for the Bulls. We will have to see if the negative sentiment holds and if it does a move higher appears promising.

Every pair has its own sets of tendencies and patterns. USDCAD does not attract the volume or sentiment extremes that other pairs present. However, an aggressive reduction in long exposure turns our focus towards price resistance and a potential volume breakout to confirm the larger trend is ready to resume. Thanks to technical analysis, we have a firm shelf of support around 1.1950 to build a bullish bias against and resistance around 1.2375 to validate a breakout in price and ideally volume would follow suit.

The sentiment and volume readings are providing signals showing the turn higher could have room to run. However, risk must always be managed in case this does not develop as it has historically. Continue to watch price action, sentiment, and volume to see if the view of a turn higher is validated. Also, feel free to utilize a demo account to practice trading risk-free before trading with real money if you are just starting out.