How to Trade the Forex Doji Breakout

- A Doji is a small bodied Japanese candlestick pattern whose opening and closing are at the same or nearly the same price.

- Because Dojis are found in a large number of reversal patterns, traders automatically think that the single doji is a reversal candlestick. But in fact, the doji by itself represents indecision in the marketplace.

The lowly doji is very unassuming in appearance. Typically, it looks like a plus sign but can appear as a capital “T” in the Dragonfly doji pattern or the shape of a nail in the Gravestone Doji. We are going to be discussing the first two types of dojis found in the “cheat sheet” above. These small candles can lead to large breakouts that either continue trends or reverses them. We are going to look at the way to trade these power packed price patterns with limited risk for maximum potential gain

Learn Forex: How to Read a Japanese Candlestick 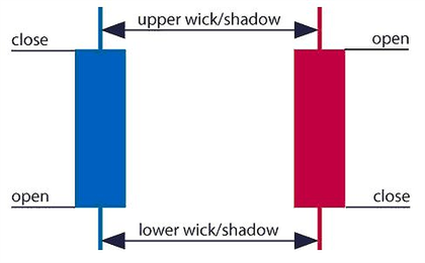 Learn Forex: How to Read a Doji Candlestick 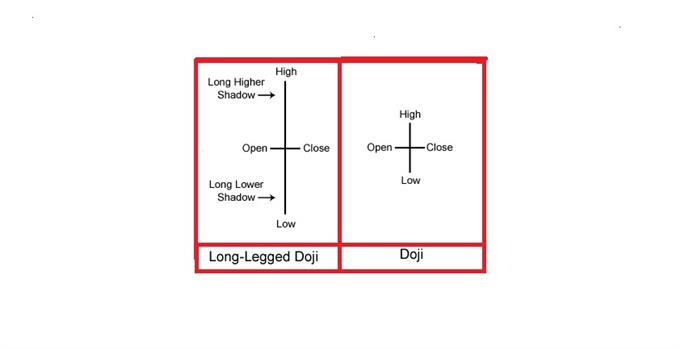 How to Trade the Doji Breakout

Ideally, you want to find a doji that has formed near a level of support like a trend line. You want to identify the doji high and the doji low as this will determine the support and resistance levels of a potential breakout. 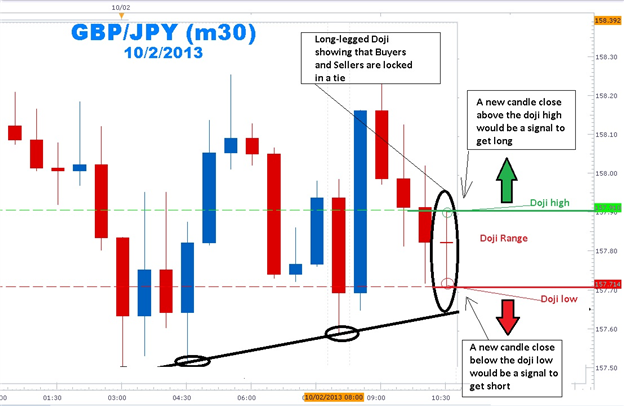 Next, you want to wait for a full-bodied candle to close either above the doji high or below the doji low. Since bulls and bears have been at a standstill, a high volatility breakout should happen releasing this pent up pressure. If you get a breakout below the doji low, place a protective stop about 4 pips above the doji high and enter short on the close of the breakout candle. Calculate the doji range and multiply that times two to get the limit. Since your stop is the range itself, you want to target double your initial risk. 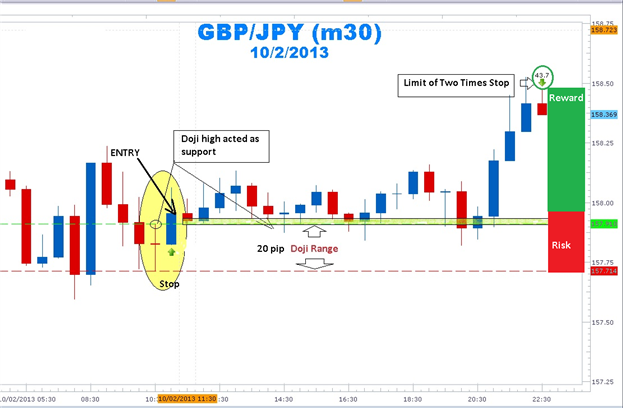 On the other hand, if a full-bodied candle closes above the doji high, enter long at the close of the candle and place a stop 4 pips below the low of the doji. That is your trigger to get long. In the example above, the doji range was 20 pips and twice the range gave me a target of 40 pips. Notice how significant the high of the doji was as it acted as support. It is important to note that some dojis during periods of low volatility, like those found in the Asia session, give many false signals.

So next time you see the doji on your forex charts, give the little fella some respect as it can tell you a lot about setting stops and limits for the next big breakout trade!

I hope you learned how to spot breakout trades with the doji Japanese candlestick pattern as well as rules to trade doji breakouts. If you are new to candlestick charting or want to further your knowledge of candlestick patterns. Sign my guestbook to access a short 20 minute free tutorial Price Action Candlesticks by clicking here