The Multiple Costs of Not Closing out Bad Trades

Article Summary: A sure mark of maturity at any stage of life is foregoing temporary good feeling for the end result that has been proven over time. A common practice of new traders to any market is an unwillingness to accept a loss which can result in a larger loss than originally feared. If newer traders take a larger look at what they’re actually giving up when not wanting to book a loss, they would be quicker to get out of the trade and move on to a better opportunity.

Forex traders come to this market to make money. That’s why we’re all here and that’s OK. What’s not OK is being so eager to enter trades in hopes of the big winner but refusing to close out a losing trade.

What Is Opportunity Cost & Why Is It Important To Traders?

The Cost portion refers to the lost benefit of the forgone trade or trades after making and committing to your trade. Holding this concept in mind is mean to help you get out of the tunnel vision that the trade you’re in just has to work out. The goal really is that you would be less reluctant to close out a bad trade you’re in now for a better trade.

Learn Forex: Why Hold On To EURUSD Long when You Could Be Shorting GBPUSD? 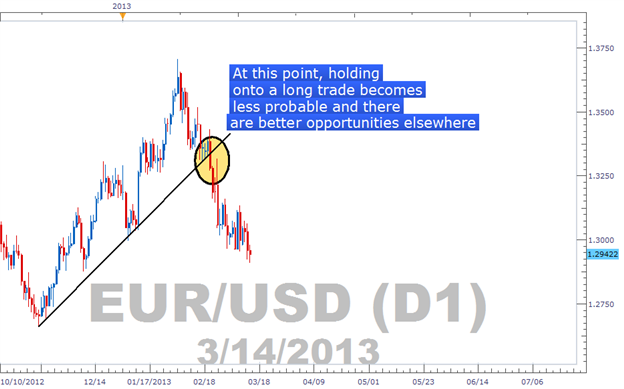 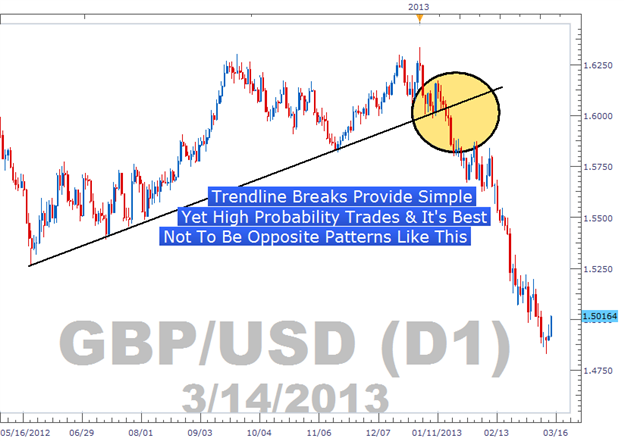 There are many methods to find out whether or not your trade is a high probability trade. The most basic range from major moving averages (click here to register for a free online course) all the way to advanced techniques such as a volatility based system like the Ichimoku Cloud. Whichever system you use is up to you but the idea is to notice as soon as possible when you’re on the wrong side of momentum and exit in hunt for a better trade instead of holding on in hope.

In The End The Prevailing Trend Usually Wins

The first cost that this article points out when holding a losing trade is the opportunity cost. The second cost is an ironic cost because traders often end up paying more for a bad trade when they were fighting to avoid paying anything in the first place. Moves like we’ve seen on EURAUD or anything against the USD of late is precisely why it’s important to close out a trade as soon as your entry signal is nullified or if you find a better opportunity than that trade you’re currently holding (See Cost #1). 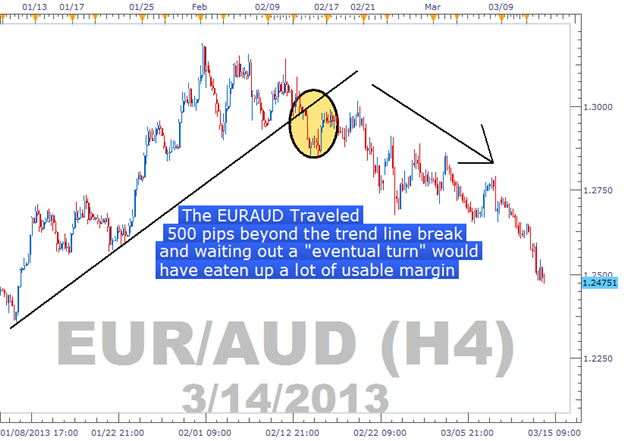 Fighting the trend is frustrating and there really is no way about it. One of the reasons for is costly frustration is because logic is often tossed aside (at least to the trader holding the opposing position) and euphoria (however temporary) takes over as new traders or investors are afraid of missing out on this great opportunity. Because of this, trends will often over extend before correcting and most traders do not have the capital, free margin, or patience to hold the opposing side of a runaway trend like the USDJPY.

Learn Forex: It’s Better to Be Not in the Trade than Opposite the Trend 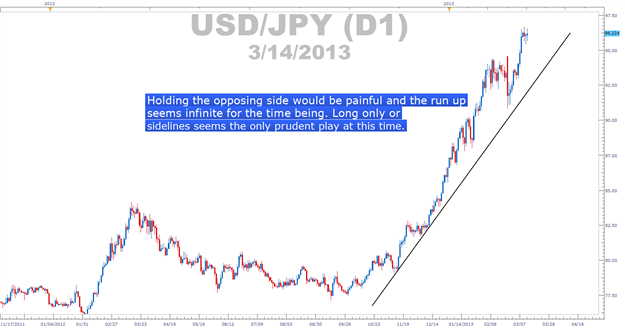 Trading is a game of probabilities, patience, and pattern recognition. However, you shouldn’t be patient with losing trades because they are your enemy and the number one deterrent to your success. In the end, the thinking pattern above is a way to turn up the heat on cutting your losses short and letting your profits run.

Unsure which indicators match up with your skill set?

Take our Forex Trader IQ Course to receive a custom learning path for how to trade FX.