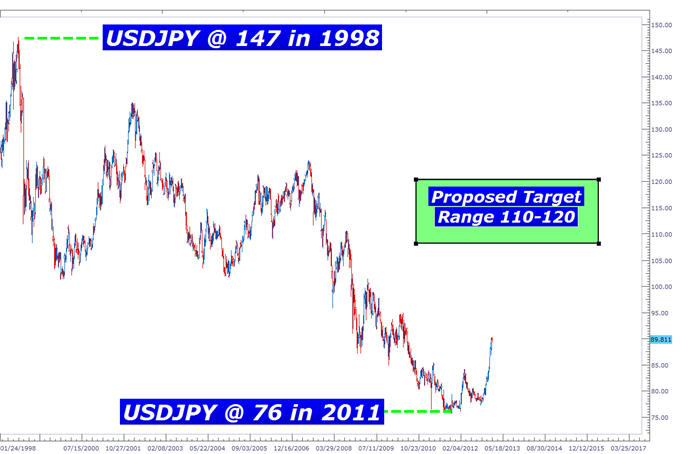 Learn Forex: How Do You Trade An Approaching Currency War?

Article Summary: There is discussion about a possible run of major Central Banks to fight to debase their currencies and bolster their economy to new heights in 2013. This currency war has been seen with the Japanese Yen (JPY) of late and the Swiss Franc (CHF) since 2011. This fundamental story could lead to many more technical breakout trades in 2013 if the Currency War launches and the Yen’s big moves may be just the beginning.

There’s talk of an economic war on the horizon. At stake is the economic health and growth of major economies. The weapons are monetary policy used to weaken currencies in a way to make exports attractive and boost local GDP.

Japan has stormed the Economic beaches on all fronts as the new Prime Minister, Shinzo Abe, and the Minister of Finance have put their foot on the monetary policy gas to weaken the currency with new rounds of intervention and fiscal targets. Prominent members of Japan’s economic cabinet are saying that 110 USDJPY would still be too low to help their exports pump up their economy, while others say that 120 would be appropriate. That’s 2,000 -3,000 pips from where we are today.

LEARN FOREX: USDJPY Could Move Higher By Another 2,000 – 3,000 Pips If Japan Is Successful

Recently, there has been discussion from other major central banks that their currencies strength could block recovery and growth. This has led others to believe they will weaken their currency to pump up exports and jump on board the global recovery train in a new manner. One thing you can count on is that if a Currency War does break out, you need to be prepared because big moves will follow.

So, What Is A Currency War And Why Is It Happening?

A currency war is an all-out determination by a central bank to debase or weaken their currency so they can boost exports and strengthen their economy.Now that most economies have stabilized themselves from the credit crisis, which is the paradigm we’ve been trading under for the last 4 years, the central banks are trying to get an economic edge by weakening their currencies.

Exports are a major boon for economies as selling to other countries is one of the best ways to boost the GDP and overall economy of any nation. For example, Japan has thrived historically with a weak yen but has been in a prolonged period of stagnant growth with a strengthening yen as you can see against the Euro in the last 5 years. 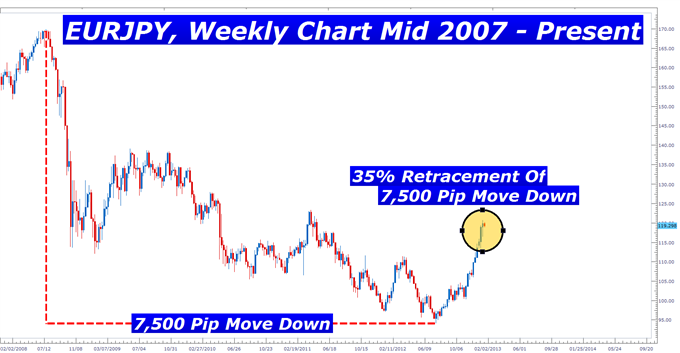 This chart and the one above displays the reality that € 1 use to buy ¥ 170 worth of goods. Now, €1 buys only ¥120 worth of Japanese goods and a few months ago only ¥95 worth of goods. This example shows you why export dependent Japan is eager to weaken their currency. In short, their global customers have less power to buy Japanese goods then they did years ago and Japan has determined a fiscal fight to restore their customer’s purchasing power by weakening their home currency.

Who Could Be Involved In The Currency War?

The main players are the major global central banks with low interest rates. These include Japan’s Central Bank for the Yen, Federal Reserve for the USD , European Central Bank for the EUR, & Bank of England for the GBP. Right now, these banks have interest rates sitting near zero so they’re already deeply committed to have their monetary policy support economic growth with their currency.

Why Does This Matter To You And How Do You Trade A Currency War?

Namely, the moves like we’ve seen in the JPY against major and minor currency pairs could be just the beginning if a currency war really takes off. Also, there are a few currencies out there that could rise sharply in value as they’re not looking to debase their currencies like other central banks.

If we get a risk-on environment, the banks that are fighting to weaken their currency to spur economic development like the EUR, USD, GBP & JPY with zero interest rates will continue the race to debase their currency. This means these currencies will fall and you could see other currencies like the AUD, NZD & MXN become hunted like the CHF did in 2011. 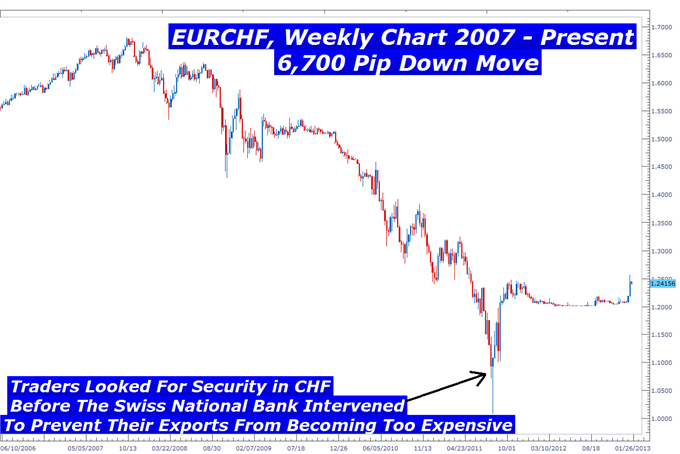 Naturally, buying XAUUSD or stock indices like the US30, GER30, UK 100, or JPN225 (Japan’s stock index) is a go-to trade when traders sense that there is a debasement of currencies.

If a runaway move starts to develop, you want to be on the look-out for Breakouts. Also, if the move continues, you can look to scale-in to a position. Scaling-in to a position allows you to take multiple entries so that you’re increasing your exposure to the move only if the trade is moving in your favor.

What Should You Watch Out for When Looking at Trade Set-Ups?

Trading is a game of expectations. When markets expect something to happen and a central bank underperforms expectation, we can see sharp moves. Keep your eye on central bank meetings coming up with our Economic Calendar and keep an ear for increased bond buying or some other type of GDP targeting monetary policies which are fancy words that mean the central banks will weaken the currency as necessary to hit growth targets.

It looks as though the fundamental picture and the technical set ups will continue to converge. When this happens, it’s a good time to be a currency trader. Take advantage of pull backs and look to play off of the central banks in the coming years if they try and debase currencies to meet economic objectives.

Unsure which indicators match up with your skill set? Take our Forex Trader IQ Course to receive a custom learning path for how to trade FX.