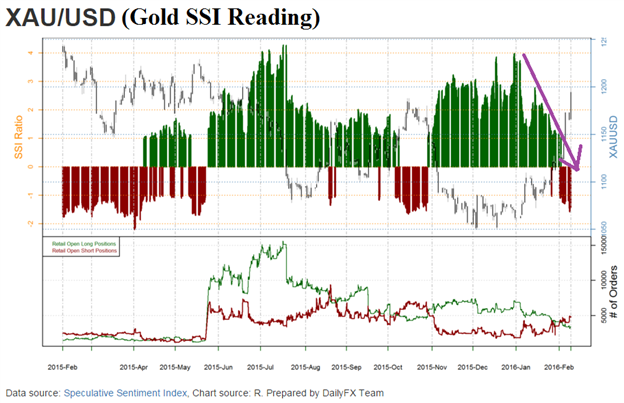 Gold prices are catching bid and the eyes of traders as it prints levels not seen in 8 months. Much of this is on the heels of a weak US Dollar as we see EUR/USD print new 2016 highs while the USD/JPY prints new 2016 lows.

Retail sentiment, as measured through FXCM’s Speculative Sentiment Index (SSI) shows traders are increasing the short positions steadily since middle of January 2016. At the same time, the number of long traders has reduced to levels not seen since May 2015. This divergence in sentiment is driving the SSI ratio negative. For those familiar with SSI, a shrinking or negative sentiment reading provides a bullish background as SSI is a contrarian type of signal.

In fact, upon closer inspection, we find that short positions are 14.5% higher than last week and long positions are 17.5% below levels seen last week. This provides a negative slope on SSI while at the same time, prices are increasing. Therefore, the bullish break above the ending diagonal price pattern suggests more follow thru ahead.

Two weeks ago, we were anticipating a run in Gold price up to $1137-1150 per ounce. At that point, we were expecting the black trend line to resist prices. Though prices ran higher, the black trend line didn’t slow them down and we saw a break above that significant level. This illustrates the bullish undertones to the Gold market.

Should prices soften a bit, the next level of support is the topside of the (2)-(4) trend line which is sitting near $1130. Additionally, the 200 day Simple Moving Average appears near there as well. 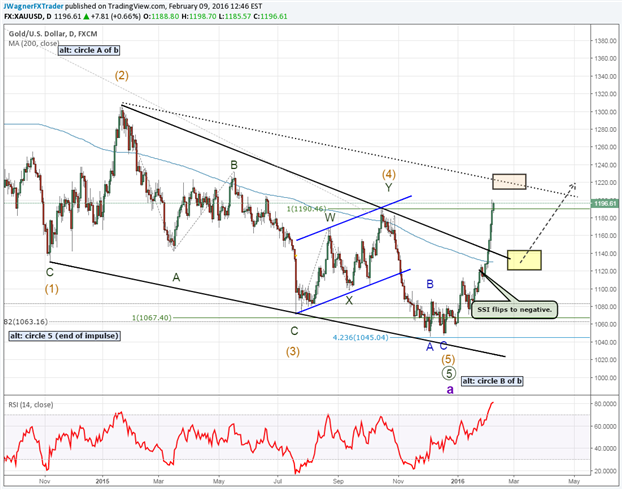 We have another alternative labeled on the chart (blue labels) which implies a longer term bullish outcome. Therefore, Gold prices appear to be in a ‘buy the dip’ type of market environment. Keep an eye on trader positioning for near term sentiment shifts.

Based on the patterns and SSI, it appears the higher probability move is for a medium term bull run.

If prices drop down below $1130 in the meantime, that could signal some other pattern is at work. We’ll reconsider our options at that point.

We found this one little tweak on risk to reward ratios increased the pool of traders who were profitable from 17% to 53%. Learn more about that tweak in pages 7-9 of the Traits of Successful Traders Guide [free registration].