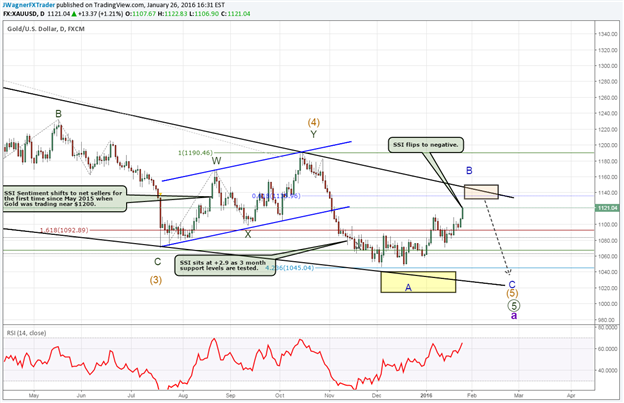 -Gold prices still within the bounds of an ending diagonal pattern

Tomorrow, Wednesday January 27, the Fed releases their next round of monetary statements. The notes in December 2015 suggested the Fed had 4 rate hikes planned in 2016. Though a rate hike is not anticipated by the economists for tomorrow, the message the Fed sends may set the expectations for the market participants on the probability of future rate hikes. This has the potential to impact the value of the US Dollar and Gold prices.

My colleague Ilya Spivak notes in his Q1 2016 Gold forecast how “Gold prices have a strong inverse relationship (-0.92 correlation) with Fed Funds futures.” Read the rest of the report and see the graph of the correlation here. [free registration required]. So the news of tomorrow could create volatility for Gold.

As we will see in a moment, there are 2 higher probability Elliott Wave counts we are watching going into the announcement. Each scenario is mapped out with the $1137-1150 key level to watch.

Gold prices are currently trading near $1122. In an ending diagonal scenario, each of the 5 waves of the diagonal are to subdivide as a zigzag or multiple zigzag. For those not familiar with Elliott Wave Theory, that means each wave subdivides as three wave move. Therefore, the full five waves of the ending diagonal will look like 3-3-3-3-3.

Upon closer inspection of wave (5), you’ll see that it is not obvious there is a 3 wave move in there. As a result, we’re inclined to label the Oct-Dec 2015 down trend as simply wave A of (5). That means this recent up trend through today would be labeled wave B of (5).

This scenario suggests that the diagonal pattern mentioned above terminated on December 3, 2015. This means December 3 was the ending spot at multiple degrees of trend and a booming rally is underway. A break above the (2)-(4) trend line of the diagonal would be an early warning indicator that the diagonal may have ended leading to further rallies towards $1380-$1600. This rally could become more complex so rallies may not be a straight line process. However, this might suggest something about the overall strength or weakness of the US Dollar since Gold is priced in Greenbacks.

This is part of the motivation on why our 2016 Top Trade opportunity was Gold priced in Sterling. At that time, the Fed had just raised the target interest rate with 4 more anticipated in 2016. That increase in rate could have an impact on the emerging markets and create instability. Or, the credibility of the central bank may be lost if they immediately back off their rate hikes. With Gold already completing or about to complete a big pattern to the downside, it is an instrument to keep an eye on.

Earlier today, Gold’s SSI reading dropped to negative territory for the first time since November 2015. This initial swing towards negative territory acts like a contrarian signal suggesting higher prices are on the horizon. As the wave labels above illustrate, there is certainly more room to maneuver until $1137-1150. Shorts are beginning to enter the picture though total participation has waned.

As a result, keep a close eye on our live SSI feed to track the readings in real time. If this reading continues to drop, then look for Gold prices to move higher. If this reading increases, especially if we are in the $1137-1150 zone, then that could signal respect and possible reaction lower for the yellow metal. 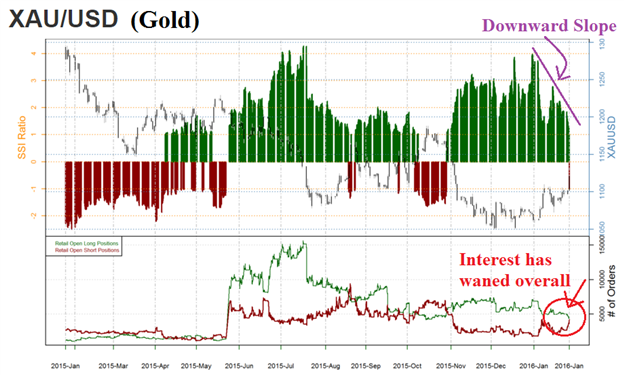 Based on the patterns and SSI, it appears the higher probability move is for a bearish reaction to take place in the 1137-1150 price zone. Use real time SSI to provide early warning clues which direction price is likely shifting.

If prices drop down below $1100 in the meantime, that could signal we are in scenario #1 above and another retest of the December 3rd lows.

More Than Irish Look for the Pot of Gold