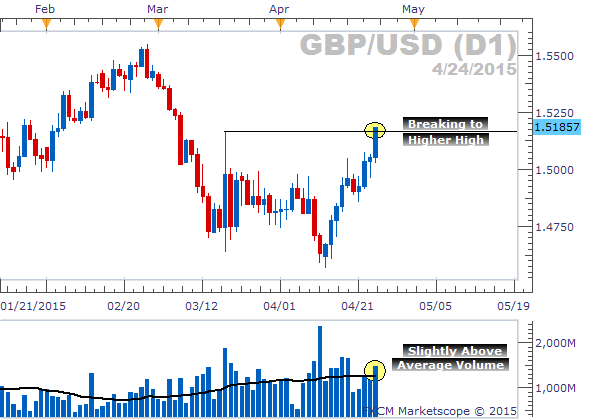 The Pound has wreaked havoc on trend traders’ accounts as the GBPUSD rallied over 600 pips since its false breakout on the 13th. We wrote about that breakout when it occurred, since it aligned nicely with strong sentiment readings of +3. But soon after publishing, both price and sentiment reversed and 600 pips later, here is where we are at.

Today is an update on our outlook on the GBPUSD using both sentiment and retail trading volume. It is our belief that these tools can act as direction filters to enhance almost any trading strategy.

Retail Sentiment is acquired using DailyFX Plus’ Speculative Sentiment Index. It is free for real FXCM account holders, but is also free for anyone using a two week trial: DailyFX Plus Trial

Retail Volume is available on FXCM’s Trading Station Desktop platform. This free software can be downloaded here and a free demo login can be acquired here. Real Volume is a default indicator that can be added to your charts.

GBP/USD Breaks Prior High on Above Average Volume - Bullish

The GBPUSD closed out the day with a gain of over 140 pips which means it broke a significant high that was set back in March. A break to a new swing high is always a big deal, but it’s an even bigger deal when it occurs on a day with above average trading volume. The more participants we see trading at these levels, the more it “confirms” the moves' legitimacy.

The chart below shows Cable breaking to a new high when volume was above the 20 day moving average (1-trading month). While volume wasn’t as high as we’ve seen in the past, it was above average which adds something a little bit extra than just a plain breakout.

Ideally, we will want to see some follow through to the upside as trading opens on Sunday afternoon and volume to remain elevated as well. While real volume is pointing towards a bullish GBPUSD, let’s take a look at retail sentiment.

There are two things that catch sentiment traders’ attention: 1. an extreme positive/negative reading or 2. a flip from one direction to another. We’ve encountered the latter this week.

The GBPUSD SSI has been predominantly positive throughout the end of 2014 and so far into 2015, but we’ve recently seen a shift that should cause pause for trend traders. The chart below shows the last two years of SSI and GBPUSD’s price. I’ve circled the most recent shift and the subsequent price move that’s occurred. 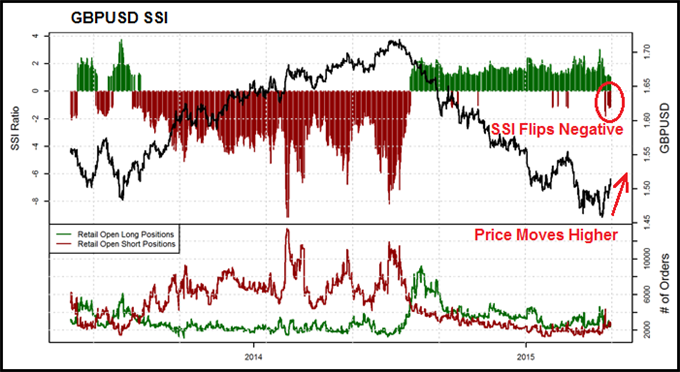 We have not seen consistent, negative SSI readings for a long time, but if we go back to the end of 2013 we can get an idea of what GBPUSD looks like during a prolonged streak of negative SSI. It created a 10-month bullish run that only ended when SSI flipped to a positive value (which created a prolonged down trend). While it is too early to say that negative SSI for the GBPUSD is here to say, it is not something that we want to ignore.

Cable is on the verge of major shift in direction if SSI and volume continue the way they have the last couple of weeks, but as always, perform your own due diligence before acting on a position in your own trading account. Also, feel free to utilize a demo account to practice trading risk-free.