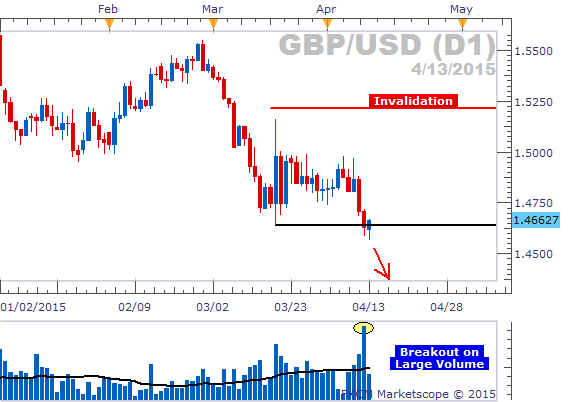 Since the last time we looked at the GBPUSD, the Pound has fallen about 200 pips, much to the delight of sentiment and volume traders. We had noticed that volume was increasing while price was falling and that most retail traders were long GBPUSD. Both of these signaled further GBPUSD decline.

Retail Sentiment is acquired using DailyFX Plus’ Speculative Sentiment Index. It is free for real FXCM account holders, but is also free for anyone using a two week trial: DailyFX Plus Trial

Retail Volume is available on FXCM’s Trading Station Desktop platform. This free software can be downloaded here and a free demo login can be acquired here. Real Volume is a default indicator that can be added to your charts.

One use for real volume is as a breakout confirmation tool. What traders look for are times when price breaks above or below support or resistance with an unusually high amount of volume. When there is a large amount of volume during a move, this tells us there was stronger conviction than had the break occurred on low volume.

In the chart below, we can see the spike in volume that was generated while GBPUSD broke a significant level of support. While we haven’t seen much follow through today, there are definitely many traders watching this pair if it breaks again.

Today, we did see another low created, but later price retraced. This may be disheartening for short GBPUSD traders, but the retracement occurred with about half the volume that was generated when the actual breakout occurred. This could be seen as a bearish signal in itself.

There was a historic moment last week when GBPUSD reached an SSI level of +3. This means that 75% of GBPUSD traders at FXCM were long, a major sentiment reading. In fact, this was the highest SSI we’ve seen on the GBPUSD in almost 2 year.

The chart below was copied from DailyFX On-Demand’s Live SSI portal. This gives us more accurate sentiment data for the last 3 months. The spike in SSI coincided with the breakout in the GBPUSD. Since then, SSI has moved to a ‘tamer’ +1.6, meaning the ratio of longs to shorts is around 60/40

I’d like to see SSI climb back above +2.0, because in the past 3 months, we’ve seen our biggest drops at those levels. But as long as SSI remains positive, my short bias remains.

We continue to look for Cable to fall further with the help of positive SSI and confirming volume. Feel free to utilize a demo account to practice trading risk-free before trading with real money and perform your own due diligence.