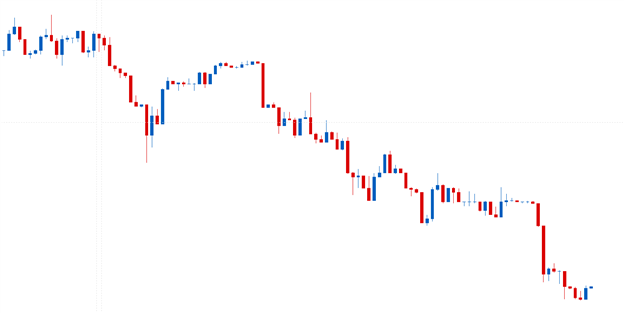 How to Create a Trend Strategy

Of the three possible manners of approaching a market, the trend-trading approach is probably the most attractive to the largest number of traders.

One of the big reasons is ease of use. Future prices are always going to be unpredictable, no matter how we approach a market. But by simply observing that there has been a bias, a trader can imagine that the future may continue to illustrate that bias. This can allow the speculator to potentially get the odds of success in their favor, if even just by a little bit.

The second reason why trend-trading is so attractive is probably a more important factor in long-term success, but that’s the ability to make more when right than the trader might lose when they’re wrong. If there is a bias in a market; and if that bias is to continue, the trader can potentially reap three, four, or five times the amount in profit that they had to risk to enter the position.

If you ask ten traders, you’re likely to get at least four or five different answers ranging from news announcements to technical analysis; but in actuality there is only one culprit for price movements and that is supply and demand. It’s the alterations to supply and demand (or the reasons for those changes) that can often be difficult to determine. We discussed this topic in the article The Forces of Supply and Demand.

These forces of supply and demand can take place over multiple time frames, in numerous manners. There may be a long-term up-trend with a near-term retracement (down-trend) with an even shorter-term bullish spike.

But these forces of supply and demand are happening in a variety of ways on these various time frames. Some trends last for 10-15 years, as demand slowly and steadily increase prices. But within that 10-15 year up-trend, we could’ve seen numerous variations of up and down-trends.

You often hear traders say ‘the trend is your friend.’ But it can be difficult to know which trend. For this purpose, the usage of multiple time frame analysis can bring significant value.

Making the Trend Your Own

Let’s walk through an example below…

In this chart, it looks like a fairly aggressive down-trend, right? (note that I’ve purposefully left the time frame off of this picture)

This picture is the one-minute chart in USDCAD, and it’s showing a total movement of about 20-pips. Not that big of a deal, right?

But take a look at this chart of the same market: 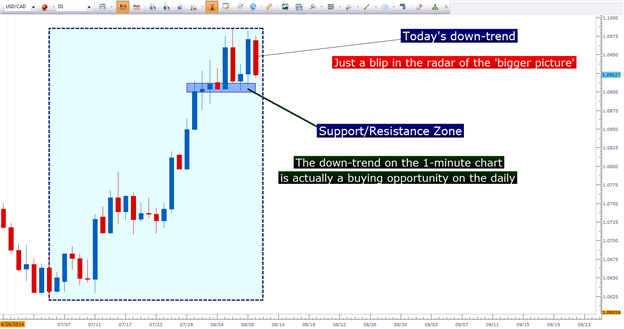 Notice how what previously appeared to be a screaming down-trend appears completely different on the daily chart?

As a matter of fact, the down-trend seen in the one-minute chart that we looked at previously is actually more of a buying opportunity on this daily chart; as prices are now nearing a support level that had been previous resistance.

So which one is right – and which direction should the trader look to trade this trend?

The trader should look to approach a market with their time frame and their strategy in mind. We discuss the topic of Multiple Time Frame Analysis in the article, The Time Frames of Trading; and in the article we enclosed a table with suggested time frames based on the trader’s desired holding times (shown below):

The most important part of integrating multiple time frame analysis is balance. As we saw in the example above, the two charts are so different that it can be difficult to relate the down-trend on the one-minute chart with the up-trend on the daily chart.

Using the provided table, traders can take a balanced approach towards multiple time frame analysis in which they use the longer-term ‘trend’ chart to diagnose any biases that may exist; with the shorter-term ‘entry’ chart to enact trading positions.

After the trader has found the optimal time frames for their approach and their strategy, they can get to work.

Diagnosing trends can be done in a couple of different ways. We looked at using price action for this purpose in the article, Using Price Action to Trade Trends: And we showed you a simple way to do this using the moving average in the article, The Art of Keeping it Simple.

After the trader has diagnosed the trend on the longer-term chart, they can scale down to the shorter-term chart to look for an entry in the direction of that trend.

After the trend has been diagnosed, the trader knows which direction they want to trade that market in an effort to get on the side of the observed bias. At this point, it’s simply a waiting game to get the optimal entry in the direction of that trend.

There are quite a few ways to do this, and once again price action is a common option. We discussed this in the article, The Price Action Trigger, and traders can look for a variety of price action formations to decide on the exact point and time of entry.

A more simple way of doing this can be accomplished with an indicator such as RSI or MACD. We discussed this premise in the article Trading Swings with Indicators; which is the essence of what the trader is looking to do here. They want to trade in the direction of the bias (or trend), but doing so only when potentially advantageous.

In the chart below, taken directly from the Trading Swings with Indicators article, we look at how a trader can utilize a MACD entry signal in the direction of the trend. Also notice, because multiple time frame analysis and a trend-side bias is being used (only long positions are being opened), the trader also has the luxury of a corresponding ‘exit’ signal. 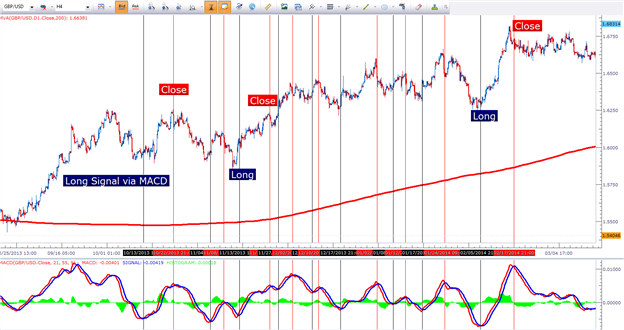