Indicators can be dangerous.

As traders, they can help us simplify past proceedings on the chart; but without proper context, indicators can cause traders to lose significant amounts of money.

The reason for this is simple: Indicators have no better chance of predicting the future with 100% accuracy than any of us as human beings do.

With technical analysis, that’s all we’re really doing: Looking at the past to get an idea as to how to best trade future price movements. Technical Analysis can help traders associate the probabilities of success; and indicators can help traders more easily identify high-probability setups.

But RSI can offer traders quite a bit more than just what it can do by default. In this article, we’re going to look at three methods for trading RSI.

The Default Use of RSI

We covered this in the article, RSI: The Relative Strength Index. We also created a Brainshark course to help traders better learn the indicator.

If you’d like to attend the Brainshark, you can do so at the following link: RSI Lesson via Brainshark. After completing the information in the guestbook, the lesson will begin.

The Default manner to trade RSI is to wait for the indicator value to move into ‘Overbought (above 70)’ or ‘Oversold (below 30)’ territory as shown below.

Once RSI begins moving out of that area, traders can look to trigger a trade in the opposite direction (selling when price leaves overbought territory and buying when RSI leaves oversold territory).

This, in and of itself can be effective; particularly when looked at on longer-term charts and coupled with effective money management.

The simplest way to trade with RSI can also be one of the more effective.

As an example, EURUSD had five RSI crosses on the daily chart in 2013, all of which were sell entries as RSI moved down and through 70. Each of these are identified and numbered on the chart below: 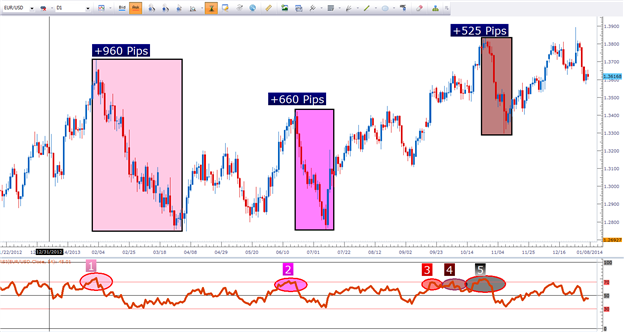 Notice that out of the 5 instances of RSI crossover on the above chart, three took place immediately before 500+ pip reversals.

More interesting: the pair trended higher on the year; opening the year at 1.3183, and closing at 1.3776. And yet, we only saw 5 signals, all of which were counter-trend; and 3 of which could have worked out beautifully.

So, even though EURUSD worked higher during the year, three of the five sell signals per RSI could have equated to profitable trades.

Traders can take this a step further by adjusting their risk-reward ratio; because, after all, RSI crossovers are counter-trend entries looking for near-term retracements. If those retracements catch to turn into a full on reversal (such as signal #1 in the above chart), the potential return could be large and outsized.

One of the brightest allures of RSI Divergence is the potential for large reversals. 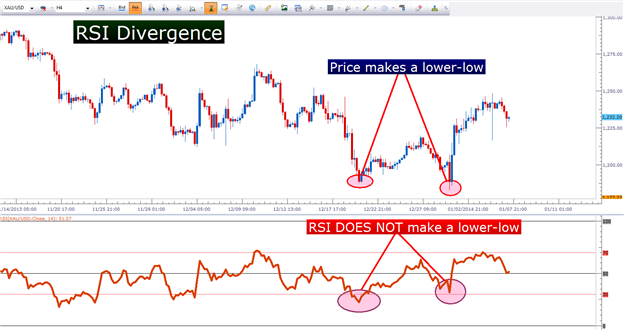 Key importance with RSI divergence is risk management; because if the trend does not reverse, the trade can be extremely costly as the trader sits in a counter-trend position.

RSI divergence may be rarer than standard RSI entries, but traders still need to look at these potential setups with context: Using risk-reward ratios of 1-to-2 or greater when looking for reversals. In the article How to Trade Reversals, we go more in-depth behind the importance and application of risk management when treading in these treacherous terrains.

Method #3: As a Trigger with a Longer-Term Trend Filter

Multiple Time Frame Analysis can bring considerable value to the technical trader; key of which is allowing the trader to assimilate price action from varying points of view.

A primary example of this form of analysis would be the combination of the Daily and the 4-hour chart. Traders can observe the trend on the daily chart, and then after grading the trend can look to place entries on the 4-hour chart.

We went over this strategy, as well as shorter and longer-term horizons in the article, Trading Trends with RSI.

Traders can grade trends on the daily chart with any of a number of trend-identification mechanisms: Price Action, Moving Averages, and ADX (The Average Direction Index) are all extremely popular options when grading trends.

Taken from Trading Trends with RSI