As a trader, you’ll likely never be as good as you can be…

Because you see, perfection in the art of trading is impossible; and this is likely one of the reasons that some absolutely fall in love with the art of speculation.

A read through Reminiscences of a Stock Operator shows a perfect example of such a person. Despite massive hardships and multiple blow-ups, the protagonist (who is actually based on a real trader by the name of Jesse Livermore) keeps coming back to the table until he ultimately gets what he wants out of markets (which was an inflation-adjusted $13 Billion).

No matter how good of a trader you become, you can always get better. That’s what keeps you interested even after you become consistently profitable.

Until then, the first goal of the trader should be to attain that level of consistent profitability. Changes are much easier to implement when trading isn’t a costly endeavor.

In this article, we’re going to cover three of the most proactive ways that traders can take steps towards this consistent profitability.

1. Use Stops and Limits – and continually look to improve risk management

Ok, so I realize this first one is something that most traders that have been around for more than a couple of weeks probably already know. But the impact that this one little thing can have on a trader’s results is really worth the top placement in this article. After all, this is the Top Trading Mistake, and also The Number One Mistake FX Traders Make. This is also one of the main reasons why traders lose money.

Many traders think they don’t need to use stops. They get a few trades out of the market profitably, and they might think that the risk of their stop being hunted by market makers or liquidity providers obviates the benefits.

While you might be able to win on one or two or maybe even three trades without placing a stop, eventually one position is going to get away from you and drain away the profits from many winning positions. This is often referred to as ‘risk-reward ratio,’ or the amount a trader is putting up as risk (stop distance) versus the amount they are looking to make (profit target).

The Importance of Risk Management 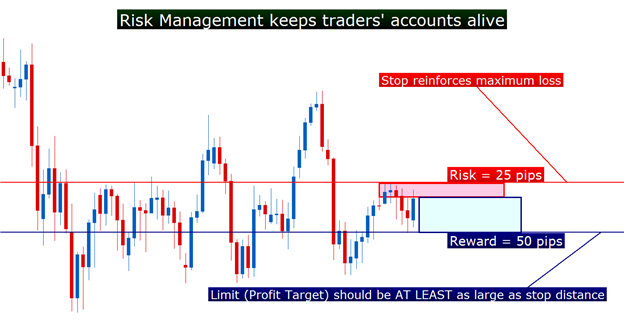 The reason so many people struggle with this is because human beings are largely observational in nature. As in, if we see or experience something, it often leaves much more of an impact than if we just read it in a book or an article. So new traders will often trigger positions and manage them without stops, only thinking about the potential for profit without ever addressing the risk of failure.

It’s only after that risk of failure has been realized, and in some cases realized multiple times, that it sinks in that a protective stop is a necessity.

Unfortunately, this is one of those lessons that have to be learned the hard way.

But think about the issue like this: The future is largely unpredictable, and it doesn’t matter how strong your strategy might be. A good strategy will allow us to trigger winning positions a portion of the time, but there is always the risk of failure.

Without a strong mechanism of cutting losers when we’re wrong, the profits don’t matter all that much because eventually we’re going to get those losing trades: And if we don’t have a way to cut the losers, all of the profits we’ve accumulated can be evaporated in just a couple of instances in which we’re incorrect.

After controlling losses has been addressed, the trader can then look at maximizing the reward in those instances in which the trade idea works out correctly.

2. Put together a Balanced Plan and Approach

No, nothing will. If you want guarantees, trading is the wrong sport for you. Risk management merely gives you a chance to be consistently profitable. After a trader learns to properly manage risk by avoiding the Top Trading Mistakes (part 2 and 3 available here), they can then focus on winning percentages and success ratios. Or to reduce this to a more simplistic point, they can focus on the entry mechanisms for positions.

This is where a trading plan comes into play. The trading plan works like a trader’s constitution and allows them to know what it is that they want to try to execute in markets. Going to the previous point of how unpredictable markets can be, lacking a constitution or a defined approach makes the trader vulnerable any day that they trade without one.

Because opportunities constantly come up in markets… and not having your approach defined means that you might try to cease those opportunities and that isn’t necessarily a good thing.

Because remember, markets are unpredictable. And opportunities are constantly available. Unfortunately, trading capital is not. So, logic dictates that it is much better to miss out on an opportunity than it is to lose precious trading capital; because opportunities will be available the next day and the day after and the day after that. But if you lose capital today, well that lost capital will not be there tomorrow… because it’s gone.

If you’d like a template for putting together a balanced approach, the article The Trader’s Plan includes a full template with an outline.

We even offered a more simplistic version of a trading plan in the article, How to Build a Four-Point Trading Plan.

3. Like anything else in life, Practice is the quickest way to improvement

Trading is funny in the fact that a new trader can pick up a trading account and quickly gain the confidence that even the most seasoned of professionals might lack.

Most professionals trade defensively, constantly fearful that one or two trade ideas might blow-up the gains of many others. New(er) traders usually trade offensively; in some cases even allowing losing trades to continue to move against them with the confidence that, eventually, prices will come back.

This type of approach can be absolutely disastrous.

Taken from How to Reap Larger Rewards, by James Stanley

If we’re talking about something like learning to drive, or learning to fly an airplane, new students are often hesitant to take on huge amounts of risk. And the reason for this is simple: The risk of failure is very obvious, and costly.

So new drivers will often start by going 10 mph in a safe area, and then 20 mph, and then eventually 30 mph until eventually the comfort is gained to get on highways at faster speeds. They take on more risk as they improve their skill-set.

In trading, however, that risk of failure isn’t as obvious to most new students. After all, anyone can guess the right side of a move and potentially make money on that one trade. This is what makes many new traders so confident in their abilities that they take on exorbitant levels of risk that eventually spell the demise of their own trading careers.

But this goes back to the very first point of this article: Markets are unpredictable, and eventually, poor risk management will expose the trader and could amount to significant losses including the loss of the entire account.

So, like anything else in life: If one wants to become a better trader, they should practice. Just like learning to drive, traders should start out slowly and look to increase speed as they become more acclimated to the act of actually driving (or trading).

There really isn’t an excuse not to do this. Demo accounts are available for free, they offer the same price feeds that are available on live accounts, and they remove the risk of financial loss from the equation so that you can learn to trade, and how to implement your strategy without the fear of actually losing money. This link will enable you to sign up for a demo account through FXCM, and you can treat this just like a live trading account until you get the level of comfort to actually deploy live capital in the markets.

While trading on a demo account will remove the potential to make money since all trades are ‘demo’ in nature, it also removes the risk of you losing money. And the fact-of-the-matter is that until you learn how to manage risk, and employ a balanced approach; the odds can feel as though they’re stacked against you.

If one wants to get even more practice in a short period of time, the practice of manual back-testing can allow a trader to ‘simulate’ market price action. The article, Practicing the Art of Trading walks you through a process you can begin using right now; and once again, there is no risk of financial loss if performing this on a demo account.