The Top Five Actions to Make You a Better Trader

There isn’t a moment where, all of the sudden, you become a professional trader. There is no light switch that can be flipped, no course that can be taken, and no strategy that myself or anyone else can give you that will get you what you want out of markets.

In many cases, this process is a journey that’s much like most of the trends we look to trade with: Two steps forward, one step back; followed by consolidation and congestion until we might be able to reach new heights.

This happens faster for some folks than others. Some people are wired more efficiently for trading: Either by having a lowered sense of rejection (and being more ‘ok’ with taking stops), or perhaps by being so tenacious that failure simply doesn’t faze them.

But regardless of your personality type, or your goals, or even your resources – becoming a trader is a journey of constant improvement.

Even once you get to where you’re going, you’ll want more. It’s human nature. Satisfaction is akin to stagnation, and stagnation leads to, eventually, death.

In this article, we’re going to discuss the 5 areas of emphasis for traders to focus on improving on the journey to becoming a professional trader.

As the old saying goes, ‘Plan your trade, and trade your plan.’ Well, that’s pretty hard to do if you don’t have one to begin with. It constantly amazes me the number of traders that are dumbfounded by a lack of success despite countless hours poured into education or analysis, yet they don’t have a trading plan.

We discuss an example of a trading plan in the article ‘The Four Hour Trader, A Complete Trading Plan.’

Most of us want to think that once we ‘get it,’ that we won’t need a plan. We want to build the innate ability to be able to look at a chart and to know what to do.

Well the only way you might get there is by having a trading plan, and this is why:

Without a plan, the trader will often lack consistency. The plan denominates the strategy: When you will trade, what you will trade, and how exactly you are going to trade it. There are a lot of different factors that go into each decision to buy or sell, and this is the biggest benefit of the trading plan. It defines those processes so that you can monitor your progress, and know what problem areas to correct.

Common components of a Trading Plan

Topics covered in the article, The Trader’s Plan

After you have a plan, the objective is simple: Make it better.

The way to do that is to make modifications to the plan as you continue to trade your strategy. If you notice that you’re winning percentage is high, yet you are still losing money; don’t worry – that is the number one mistake that FX traders make, and even that can be fixed.

The key here is to get cognitive feedback that you can use to improve. And until you have a plan, your chances of getting this type of feedback are extremely limited.

This may seem overly-logical, but like many other things in life the best way to get better is to just do more of it.

In trading, this can be dangerous; because if we don’t trade well, we lose money. And money being the finite resource that it is, we can only lose so much until we can’t afford to lose any longer. Many new traders automatically associate pain, risk, and suffering with the idea of ‘practicing’ trading. Few want to go through the troubles of ‘practicing’ on a demo account for fear of wasting time. Others are often reticent to trade with smaller sizes because they figure that if they are going to spend their time trading, they want it to be worthwhile.

My advice: take a step back. Markets are not an ATM machine with which you can pull out money at your leisure. If you haven’t yet proven that you can be consistently profitable, lowering the trade size or trading on the demo might not be the worst advice in the world.

But you can take the concept of practice to the next level.

Much of what traders want to build their decision-making processes so that when a setup shows itself, they know how to trade it. This is similar to pattern-recognition skills, but taken a step further; because not only do you need to identify the pattern, but you have to know how to trade it. Building this type of repertoire in a live market environment can take months, if not years for a trader to develop. Because even after you eventually find a setup, you have to give it time to work itself out.

In Manual Back-Testing; Practicing the Art of Trading we show traders how to do just that. Using the Trading Station II platform, traders can ‘simulate’ price action simply by using the Marketscope Charting Package.

Practicing the Art of Trading 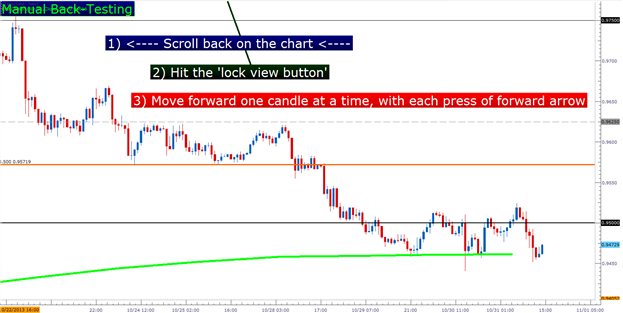 #3 – Learn to look at markets without rose-colored glasses

We’re all human, and we all have opinions. We also have biases, insecurities, and fears and anyone that thinks they don’t will likely have an up-hill battle to becoming profitable.

The reason for bringing this up is because all of these biases and opinions enter into our analysis. And if we don’t know how to properly control them, they can end up wreaking havoc on our trading results.

One way to do this, and a favorite among the DailyFX Team, is to utilize price action in the trader’s analysis. We included a very simplistic process for becoming more familiar with price action in the article, Four Simple Ways to Become a Better Price Action Trader.

The reason that this can bring so much significance to the traders approach is because price action doesn’t purport to tell you anything other than what has already happened. This is the true essence of technical analysis; analyzing past prices in an attempt to trade the future. Introducing indicators into a trader’s technical analysis introduces error; since nearly all technical indicators are lagging the market.

Price Action is simply the story of where prices have been, without the obfuscation of indicators that may prove misleading.

This certainly doesn’t mean that indicators can’t or shouldn’t be used; it merely means they need to be qualified for what they are: Just another way of reading price action.

#4 – Drop the negativity, it’s not doing you any favors

It’s unavoidable. We all feel bad when we lose. As human beings, we can’t help the fact that we equate success with being ‘right.’

If you ask whether a sports team was successful, an oft-used measure is how many games the team won versus how many they lost: If they won more than they lost they’re often seen as successful and vice versa.

But trading isn’t sports. Because you can’t get credit for 5 wins in one sporting contest; and in trading you can absolutely have one winner eclipse the loss of five losers. This is the same exact thing that we saw in The Number One Mistake FX Traders Make.

A trader can be ‘right’ 40% of the time, and still be profitable. Surely, they might not ‘feel successful,’ since he’s ‘failing’ 60% of the time… but as long as the trader is looking for favorable risk-reward ratios, the necessity to win more often than you lose doesn’t matter as much.

Perhaps more threatening than sloppy money management is the fact that negativity breeds more negativity. If you get down or negative after a bad trade or a series of bad trades, that’s only going to impact your future decisions. And if those don’t go well, you’ve just entered into a downward spiral of pity, self-doubt, and eventually remorse. And after a while, trading just won’t be fun anymore. You aren’t going to want to do it, and then that can impact your decision-making processes even more.

Being negative is a quick and costly way out of this game.

If you want to perform any of the actions listed in this article to improve your results – you have to actually want to do them. Trading isn’t like a job where you can punch in a time clock and earn an hourly rate just for being ‘at work.’

Being negative or narcissistic is only going to make these tasks seem more arduous. You aren’t going to want to do them, and you’ll probably just end up going through the motions.

#5 – Aim to strike the delicate balance between confidence and humility

Psychology is an extremely important part of a trading approach, and without confidence traders are fighting an up-hill battle. The reason for this is because of item #4, negativity.

Without confidence, traders are often fearful. And eventually, most people will react to that constant fear with negativity. Then it becomes a self-fulfilling prophecy of that downward spiral of pity, self-doubt, and remorse.

We talked about the dangers of having too much confidence in the article, The Confidence Trap. Being too confident can be as dangerous as not having confidence. The key with confidence is to strike a delicate balance.

Taken from the article, The Confidence Trap

Traders should strike to have enough confidence to be able to pick themselves up from their mistakes, and to continue through the tough periods that all traders will inevitably face; while still remaining humble enough to realize that our best trade ideas can still fail. Without the ability to cut a losing trade, we constantly run the risk of The Number One Mistake FX Traders Make.