Confidence is a funny thing. And not just in trading, but life in general.

Without confidence – we lack the conviction to stand behind our beliefs, and our decisions. This can lead to very erratic decision-making and in many cases, a lack of effort or care since the prospect of success may seem so distant without that necessary confidence.

It’s generally accepted that confidence is a good thing. Because with confidence, you have the conviction to stand by your beliefs; and further – if proven wrong, your confidence in yourself can help you pull yourself up, dust yourself off, and fix whatever went wrong in an effort to improve.

Without confidence – you may never actually pick yourself up from your failures. You’re doomed to, at best, mediocrity if not all and out downright failure.

So, to succeed at many things in this life, some amount of confidence is necessary.

In trading, where failure isn’t just a possibility but something that will definitely happen to you at some point, the importance of having confidence cannot be understated.

What is the ‘Confidence Trap’ and why is it so prevalent?

The confidence trap is the other end of the spectrum; when the trader is so confident in their actions that they begin to downplay or, in some cases, ignore the potential risk of their decisions and their positions.

They open a trade for whatever reason, and being so sure that they are right – they don’t place a stop; they don’t consider the downside. This can often happen after a trader gets a few winners under their belt; they feel like they have this whole trading thing ‘down.’ They flippantly assume success.

And when that trade moves against them, their abundance of confidence doesn’t allow them to admit they were wrong. They hold on to the position, expecting the market to conform to their own individual beliefs; thinking, ‘I’m right, and the market is wrong. Price HAS to come back.’

This is the same thing we saw in The Number One Mistake that Forex Traders Make. In the DailyFX Traits of Successful Traders research, over 12 million trades were analyzed. The results were shocking. It was found that traders won more than half the time in the most common currency pairs on FXCM platforms (bar graph shown below): 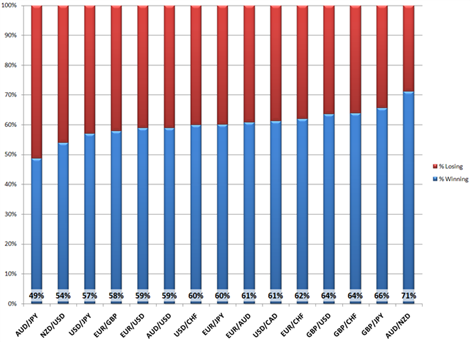 Think of each of these wins as small boosts to the trader’s confidence – and as you can see in blue above, traders won more than half the time in nearly all of these pairings.

But each of these small increases in confidence led to a really big problem: Over-confidence.

These traders would inevitably walk into a trade that they wouldn’t win; and they just couldn’t pull the trigger in taking the loss. Their over-confidence causes them to hold in losing trades for entirely too long; and this allows one or two losing trades to wipe away the gains of numerous small trades.

From the same article, we can see below that the average loss on each of these pairings (in red) outstrips the average wins (in blue), and in some cases the difference is astounding: 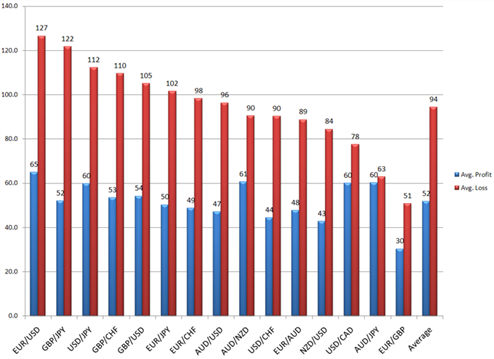 These disastrous decisions can have far-ranging consequences that can cause long-lasting damage. To the trader, it really just takes one bad trade gone awry to completely wipe out an account. And then at that point, the trader has a serious problem on their hands – a lack of capital. So how does one prevent falling into this trap?

How to Prevent the Confidence Trap

Quite simply, humility; but it’s an unfortunate fact that humility often has to come from the experience of being humiliated. The very act of humiliation can completely erode confidence, which, once again, is almost a necessity for long-term trading success.

So, what is the answer?

Cautious optimism, which is a delicate balance between fear (lack of confidence), and conceit (too much confidence.

Below is a real simple continuum that expresses this very delicate balance:

Traders want to strike a balance between fear and conceit

To arrive to this stance of cautious optimism, a trader often needs experience. To ride the highs of over-confidence only to realize that it’s a short path to the depths of despair is to build character.

Traders that are over-confident will eventually realize that no system of analysis or trading strategy will win all the time. And because there is always the risk of loss, which means that risk management MUST be used to realize long-term success.

They’ll also realize that it’s truly impossible to predict the future; and the art of trading is NOT predicting the future.

The only shortcut to arrive at this destination is brutal humility. That is, knowing that any trade idea is, at best, a hypothesis. The trader can then utilize solid risk management, and focus on trading high-probability setups as opposed to attempting to predict the next 3 years’ worth of price movements.

Focusing on and learning to manage risk as opposed to outguessing the market is the most surefire way to striking this balance. Studying price action can be one of the best ways for a trader to plot risk management objectives while focusing on the cleanest opportunities.

The trader can have the confidence of being able to recover from losing trades (since losses will and can be contained by risk management), while also refuting fear by capping the total loss that they are willing to take on any one position.

After one of the inevitable blows to the traders’ abundance of confidence, they will invariably become scared. Many traders quit at this point. Others build up theories or theorems that long-term trading success isn’t possible and that markets are random (see random walk theory and/or the efficient market hypothesis).

The confidence trap is something that almost every professional trader will face at some point on their journey of becoming a professional. Because despite the various levels of intelligence that may be dispersed throughout the population; we are all human, and not a single one of us are immune to the greatest motivator of all time: Our own psychology.

A Real and Current Example of the Confidence Trap

To the new trader, much of what was said above may seem relatively esoteric. So, whenever we find ourselves in such a position, it can often help to look at a parallel theme that might make the information seem a little more real. And it just so happens, we have a very real example of this taking place in the world’s largest economy.

As the government shutdown continues in the United States, politicians continue to bicker and politic around various issues with the fate of the US economy (and further, the global economy) hanging in the balance.

Every day that we go on without a resolution is a day closer to potential disaster. If the United States defaults on the massive amount of debt that’s sitting in the marketplace, the reverberations can be felt in every economy in the world; and this isn’t a good thing.

If an analyst didn’t know any better, they may think that American politicians were so optimistic about economic conditions that they felt they could risk a standoff over an overly-politicized issue.

But the fact of the matter is that economic data has been so weak since the Financial Collapse, that the Federal Reserve has had to continue adding liquidity of $85 billion per month to the financial system just to avoid another collapse.

The four rounds of QE over the past 5 years have created a false sense of security about the US economy, seeing stock indexes run to all-time highs all the while unemployment remains at extremely elevated levels.

Politicians are allowing this false sense of security to encourage them to dig their heels in during negotiations, and disallowing any compromises to happen so that the American economy can continue attempting to recover; which has, at this point – been meek to say the least.

The ramifications of American politicians suffering from the disaster of the confidence trap cannot be understated. Failure to reach an agreement means that the United States will, eventually, default. And that very act of default could spark a massive move of risk aversion throughout the world that could completely obviate any of the efforts from central banks over the past five years to stave off the global economy from disaster.

Make no mistake about it, if the United States defaults on even a small portion of its debt, the financial collapse in 2008 may seem like a modest move in prices. And this is all a result of an over-abundance in confidence.