Markets are never predictable. This much is a given.

But there are certain times in which markets may seem even more uncertain than usual. The current stance across global markets is one that many investors and traders have allocated to being, well, ‘crazy.’

First we had the Federal Reserve Taper Conundrum. Then we had the shutdown. And while it appears we may be nearing closer to a resolution on the shutdown and debt limit, the environment is anything but certain.

The Tapering of QE isn’t really a question of ‘if’ so much as ‘when.’ And even once the taper begins, nobody really knows what will happen next. We don’t exactly have a comparable period of history that we can look back to in order to say: ‘The last time the largest economy in the world slowed their injections of $85 Billion per month, this and that happened, so this is what we can expect.’

So, to say that there is uncertainty in the market can be a bit of an understatement. And in your career as a trader, this uncertainty will not be an isolated event. After all, if trading were easy, everybody would do it… and then there would be no one left to actually produce goods and services in the economy for us to speculate on.

We saw the profound impact of risk and reward in the DailyFX Traits of Successful Traders Research. In The Number One Mistake that FX Traders Make, we saw the reason why so many traders fail. And these are generally the same things that are the culprit for trader failure in other markets as well. And that is the fact that traders lose so much more when they are wrong than they win when they are right.

In some cases, the difference is so profound that traders can be winning in 70% of their trades – and STILL be losing money. 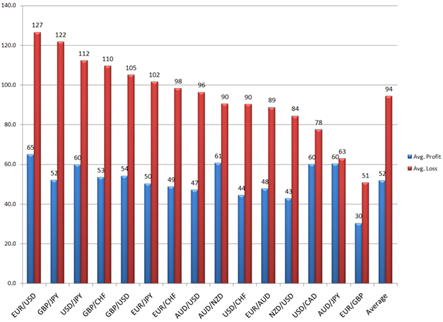 Markets are unpredictable as-is, but to add the additional pressure of needing to win 75-80% of trades, speculators are setting themselves up for failure because, likely, they will NOT be winning that often with regularity.

So, the thesis – the way to avoid The Number One Mistake FX Traders Make – is to look for a bigger reward than what is being risked on any individual trade.

This way, even if a trader is getting a 50/50 chance of being right on any individual trade, they can still have a chance at grasping a net profit in the market.

When markets are even more uncertain, they need to begin assuming an even smaller chance of being ‘right’ and winning trades. And while this may sound defeating, it doesn’t mean that it can’t be worked with. It simply means that traders need to be MORE aggressive on their risk-reward ratios during uncertain times in the market.

The reason for this is logical: In an uncertain market, prices can move quickly for AND/OR against you. Essentially, when markets are uncertain, we have to begin pricing in a ‘surprise.’

And by looking for reward ratios of at least 2 times the amount being risked, it allows us to capitalize on the situations in which the surprises work out in our favor while mitigating the damage of the surprises that work against us.

This method works with a similar theme from the earlier method, and that is that the more uncertainty that may be in a market, the more wild and volatile short-term price movements may become.

Scalpers may be challenged to see the same momentum or trends on shorter-term charts as catalysts and stimuli (the same themes bringing uncertainty in the market) may cause erratic price movements.

One simple way to obviate all of the short-term craziness that can be seen in uncertain markets is to move back on the chart and look to trade with longer time frames. This allows the trader to get a ‘birds-eye view’ of that market, and to make decisions accordingly with the information given.

To do this, a few additional adjustments would be warranted.

Taken from The Time Frames of Trading

So, with this method – the trader is essentially forcing themselves to use a longer-term outlook in anticipation of the uncertainty plaguing the market to clear up.

A favorite line of my friend and colleague Jamie Saettele is ‘you don’t have to have a trade on…flat is a position too.’ Meaning – as a trader, you don’t ALWAYS have to be trading something.

Jamie does a really great job of this. He’s a purely technical trader, and in many cases absolutely abhors the news flow that permeates around markets. Unfortunately, he’s stuck next to Michael Boutros, David Song, Chris Vecchio, David Rodriguez, and me on the desk here in New York, and we talk markets all day, every day.

Jamie simply puts his headphones on to ignore our desk banter, and scans markets until he finds something to trade. And if he doesn’t find any setups that strike his fancy, he stays flat by not buying or selling.

If you haven’t yet built up a repertoire to know when to turn things off or not take a position, this can be a great time to work on your trading strategy.

If you don’t yet have a trading plan, these periods of uncertainty are optimal periods for creating one. This can help denominate when you will trade, and when you won’t. By many accounts, a trading plan is a necessity for success

Further, this can be an excellent opportunity to test out your strategy. You can even use down-time in the market to simulate a trading strategy by using Manual Back Testing. This can be one of the best uses of time for traders; not only to get comfortable with a strategy but to maximize ones trading time, even when markets are uncertain and there may not be many comfortable setups available for the trader to look to take advantage of.