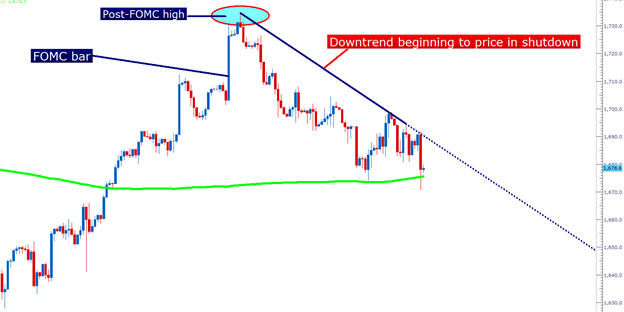 All About the Shutdown, and How to Trade It

It seems like only yesterday that prognosticators were bickering about the merits of tapering QE purchases. Oh, how two weeks can change the landscape in financial markets.

While the prospect of a government shutdown was firmly cemented in front of us, and has been since the resolution to the Sequester earlier in the year; you’d think that this came out of nowhere.

It didn’t. This was actually something that many political pundits expected, a similar reoccurrence to the situation that threatened the global economic recovery at the beginning of this year when the ‘debt limit’ was reached.

In this article, we attempt to explain why the shutdown has happened. We go on to look at how this may potentially pan out and maybe more importantly than that – we look at how traders may be able to strategize around this government shutdown.

Why did the US Government shut down?

First and foremost, it’s important to note that this isn’t a complete shutdown. The Postal Service is still operating, the military is still at work, and Social Security checks are still being delivered to recipients. But many ‘non-essential’ aspects of the government have seen workers ‘furloughed.’ So, things like getting a passport or a small business loan are not going to be possible as long as this shutdown continues.

As to why the government has shut down - to put it simply: The two dominant political parties in The United States can’t agree on an issue; which further highlights disagreements they have about other issues. So, at this point, we have two parties that are firmly entrenched in their own systems of beliefs and governance and, at least thus far, we’ve seen very little willingness from each party to negotiate or compromise.

The primary disagreement is the US budget. The real job that Congressmen get elected for is to authorize spending bills to further the initiatives of the government. The importance of this function to the American economy cannot be understated; without this, the largest consumer economy in the world effectively grinds to a screeching halt. This doesn’t just impact the United States.

Considering the fragility of any semblances of recovery that have been shown since the financial collapse, Congress not being able to agree on a budget has massive implications for the rest of the world…

So each party in Congress, at least thus far, has not agreed to work with the other party; and without a consensus, no budget will be passed.

Why can’t Congress agree on a budget?

This is where things begin to get messy.

One party has refused to work with the other party (and no reason to name the parties, this isn’t a political article but a trading piece), and the primary reason is because of an issue that has nothing to do with this budget.

Rather, the issue ‘behind the issue,’ is the Patient Protection and Affordable Care Act, or known more widely as ‘Obamacare.’ This was signed into law on March 23, 2010.

Further, this was upheld by the United States Supreme Court in a ruling on July 28, 2012.

So, what is the actual issue?

The spending bill that currently can’t be agreed upon is more of a ‘bargaining chip’ for one political party to attempt to derail, defund, and essentially obliterate Obamacare, because Obamacare isn’t really tied to this budget at all.

Rather, one group within one political party thinks that Obamacare is so incredibly bad for the future of the American economy that the government should be shut down to undercut it.

So others in that party that might not even be associated within that small group are compelled to agree with their party-mates while maybe not necessarily being on-board with this whole ‘shutdown’ idea.

But before you think that one political party is evil while the other is altruistic; keep in mind that there are arguments on both sides of this disagreement. The dissenting party claims that Obamacare is so incredibly costly towards employers that it has kept, and will keep the American economy from ever truly recovering.

After all, we’ve had the Federal Reserve adding liquidity at full throttle for over 5 years, and yet unemployment is STILL north of 7%. One political party (the one dissenting) thinks that it’s because of an over-reaching government, and their willing to shut the government down to do something about it.

So, this isn’t a clear-cut issue of ‘this party is bad,’ or ‘this party is good.’ This situation, for lack of a better way of summarizing it, simply is what it is.

As a trader, it’s my (and our) job to attempt to profit from whatever takes place in the market; whether it agrees with our political world-view or not.

A degree of political agnosticism can be a trader’s best friend.

How is the shutdown going to pan out?

This is where things get interesting.

There are essentially two possible scenarios, and both of them involve a meeting of the minds. The only difference is the when that might happen, and what takes place in the meantime regarding parallel issues (employment, inflation, etc).

Making matters more dangerous and perhaps something Congress hasn’t taken into account – is economic fragility around the world.

Many accusations of bubbles in China, or Australian real estate leave those former high-flying economies very vulnerable to US economic pressures. Europe still isn’t out of the woods of the European debt crisis, despite the recent bout of satiety seen in sovereign bonds from troubled nations.

Either way, a budget will get passed eventually. It’s only a question as to whether political compromises are made to Obamacare, or whether the dissenting party is willing to ‘cave in.’

How will this impact markets?

The threat to the global economy can’t be understated by a prolonged shutdown. The longer the shutdown goes on for, the higher those risks become.

The impact of the shutdown has already begun to be priced in American equity indices. The S&P 500 has begun a down-trend after the post-FOMC highs that were seen on the ‘lack of’ taper announcement:

It can be difficult to fathom reasons for bullishness in American equity indicies as long as the shutdown continues.

A large number of workers have been ‘furloughed.’ An already delicate recovery is made even more questionable by the fact that a huge mass of people have just had their income removed from their lives.

But, this is also probably one of the most crowded trades in the world. And, after all, there are numerous reasons why the S&P 500 should have been priced lower over the past 5 years; all of which have come to naught in what has been, unbelievably, one of the greatest bull markets that the world has ever seen (the entire time of which unemployment was above 7%, and inflation below 2% which would actually question whether or not this was a ‘robust’ bull market).

So, there are probably some better options out there for speculators looking to trade the shutdown.

Opportunities for Trading the Shutdown in the Forex Market

This is the market where traders can get the upmost of flexibility in trading such fundamental themes.

The initial reaction to the shutdown in the FX market has been a solidification of the previous fundamental driver, which is essentially: Bad news in the United States means the Fed will likely avoid tapering QE; which has amounted to continued Dollar weakness from the post FOMC announcement.

The initial path for the US Dollar is one of weakness, and at least for the initial throes of this government shutdown – Dollar weakness is likely the path of least resistance.

The bigger question comes in with a prolonged government shut-down; as in – what happens if this thing goes on for weeks?

Well, in that case, we can see massive US Dollar strength coming into the fold in a flight-to-quality; as investors around the world become increasingly insecure and worrisome over a global economic recovery.

Because, remember – there is much more at stake here than just a political issue. By many accounts, the health of the global economy hinges on how quickly American lawmakers can come to a resolution.

If a resolution isn’t found quickly – then, likely, US Dollar strength will come back and what was seen at the beginning of this year when the ‘sequester’ dominated the headlines; well that may seem like a ‘mild’ movement.

But, a professional trader’s job is not to gamble. The trader’s job is to use analysis to look for opportunities, and further – to employ the few tools he or she has at their disposal. Mainly: timing, risk management, and trade management.

In the article The US Dollar Hedge, we look at a strategy that traders can use when they might be unsure of market direction on the greenback.

The strategy centers on using volatility to the trader’s advantage, and relying on one of the few things we know: That the US Dollar is probably going to move.

Take the current technical setup on the US Dollar, for example.

The one thing we know for a fact? That USD is probably going to move… 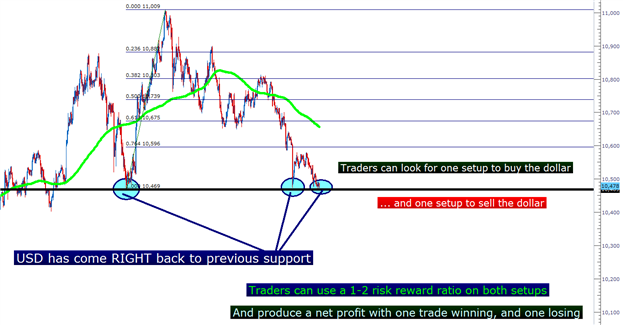 In the US Dollar Hedge strategy, traders can simply expect USD to move, and can use price action to help illustrate the setup. And the fact that USD is sitting right at a previously established support point can be seen as the dollar being at a major decision point.

The dollar may move higher, and the dollar most certainly may continue its recent trend lower. But as traders, we can look to capitalize on either scenario by taking opposing stances on the US Dollar.

So, for instance – a trader can look to one currency pair to buy USD, and another to sell USD; then implementing roughly equidistant stop and limits on each trade, with a minimum 1-to-2 risk-to-reward ratio. So, whether the dollar bounces off or shreds through previous support, the trader is in a position to capitalize.

And this is something that traders can look to implement as long as the government remains shutdown.