Will the Weakness in Japanese Yen Continue?

Since the first day of February this year, the Japanese yen has continued its slide against most major currencies; offering a trend of weakness in the currency that has been seen only one other time since beginning of 2010. This article will examine the specifics of what is changing in the Japanese economy, and how Forex traders might be able to use this information in deciding an approach on ¥-based pairs.

In the article How a Currency can Change the World, we examined the effects of a currencies’ appreciation on a heavy export-based economy, and we saw that the effects can be damaging; potentially changing the prospects of an entire nation. 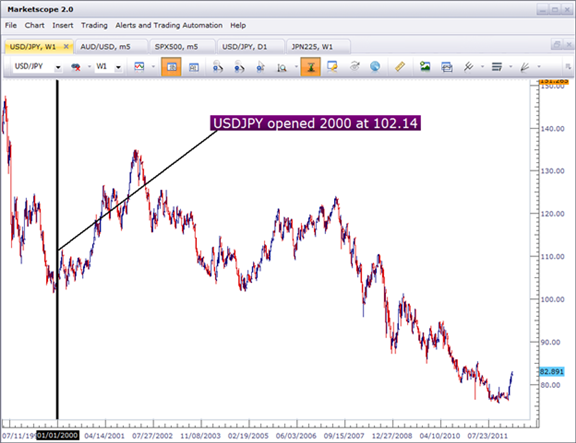 As we examined previously, this means that exports are less profitable; making Japanese products more expensive on a relative basis to competing goods made in economies with weak currencies (like the United States). Price conscious consumers begin making other purchasing decisions; instead choosing to buy Chevrolet or Volkswagen, because Honda just isn’t as affordable.

The alternative for Japanese companies is to absorb the hit of the strengthening currency; which can mean that Japanese stock prices would be affected. We’ve seen an element of this too, as evidenced by the JPN 225 CFD (mirroring the Nikkei index). 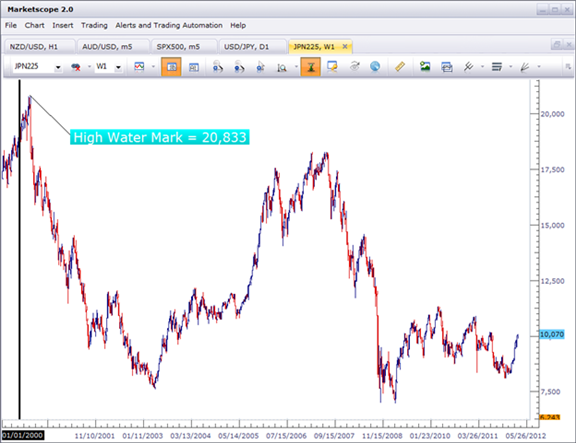 The consequences of such a movement can be enormous, and the Bank of Japan has made numerous attempts to intervene in markets to weaken the Yen.

While the efforts would generally offer a bout of short-term relief, the strength in Yen eventually came back to continue to drive the currency to all time highs against the US Dollar (this would be lows on the USDJPY currency pair as Yen is the counter currency in the pair).

When the Tohuku Earthquake and Tsunami ravaged the country of Japan, worried investors repatriated Yen at a breath-taking rate.

One might imagine that an event as severe as the events that transpired would equate to weakness in a currency?

In Japan, where rates were left extremely low for an extended period of time, Japanese investors became accustomed to investing in foreign markets to receive a better rate of return. After capital had flowed out of the economy for so long, such an event equates to the concept of ‘Yen Repatriation.’ This is when investors bring their Yen back into Japan out of fear. As those investors buy back Yen, this serves to push the price higher.

In the case of the Tohuku Earthquake and Tsunami, with the Fukushima disaster following shortly thereafter; we saw an extreme case of Yen repatriation, pushing the Yen to a new all-time high against the US Dollar. 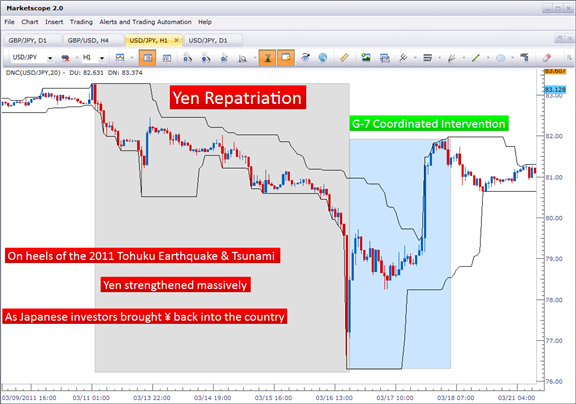 At this trying hour for the nation of Japan, the G-7 nations stepped in an unprecedented manner to intervene in the currency; weakening the Yen over 500 pips against the US Dollar.

Unfortunately this only offered short-term relief, as investors eventually bid the Yen higher over the course of the next 4 months; once again, establishing a new all-time high against the US Dollar.

But something strange happened during the month of February. The Yen began weakening, and hasn’t yet stopped. This is much different than the previous bouts of Yen weakness seen in markets. This time we’ve seen resistance levels getting taken out as the currency continues to weaken.

Is it really different this time?

While it is still too early to say that this most recent bout of Yen weakness will initiate any longer-term trends, there are elements of change that could serve as optimism for the people of Japan.

Much of this change seems to be spurned by the inauguration of a new Prime Minister: Yoshihiko Noda, who was previously the Finance Minister of the Bank of Japan.

After taking over after the resignation of previous Prime Minister Naoto Kan (who had also functioned as Finance Minister of the Bank of Japan previous to his administration), Noda made one of his first items of business to announce the inclusion of Japan to the Trans-Pacific Strategic Economic Partnership. Through the partnership, member countries would enjoy free trade relationships with a host of other nations. Although Japan has not formally entered negotiations to the partnership this has served to be a controversial topic in Japan.

Noda also ushered Japan to a new form of currency intervention. In November, the Japan Bank for International Cooperation began a program of offering cheap US Dollar based loans to Japanese companies to make foreign acquisitions of companies or resources.

Upon boosting the Asset Purchase program in Japan yet again on February 14th, Yen weakness appeared to accelerate.

Where does the Yen go from here?

The answer to this question is likely contingent on an even bigger question of global economic growth.

If the global economy continues to improve, this could allow for additional weakness in the Yen, much like what was seen in markets throughout 2005 to the 3rd quarter of 2007, in which we saw the USDJPY currency pair move from the psychological support level of 100.00 up to 120.00; a loss of 20% for the currency.

However, if the European debt situation rears its head again, or if Chinese economic data continues to show signs of slow-down in the economy, we can easily see a re-emergence of Yen strength, with tests of all-time highs (lows in the USDJPY currency pair).