One of the most interesting aspects of the Forex market is the global implication carried behind each and every quote.

While a price may move quickly, and at times, feel fleeting; it’s often easy to forget that these prices carry heavy repercussions throughout our economies – even if your nations’ currency isn’t in the quote.

A great example of that is Japan.

Traditionally a heavy exporter, Japan’s economy is very much driven by their trade balance and the world economy continuing to purchase Japanese goods. As Yen gets more expensive compared to other currencies, it makes purchasing those goods more expensive for foreign consumers. This can be extremely prohibitive to the Japanese economy, and the companies that are trying to sell goods to those foreign consumers.

Let’s run through a very basic analogy to see how Japan is affected with a strong Yen by taking a closer look at one of Japan’s key industries and one that many of us are probably already familiar with: The Automotive industry.

Let’s say that one of the large automobile manufacturers in Japan is in the process of expanding into the United States; and has seen business from the United States become an increasingly important part of their growth strategy. If they were only able to sell cars to Japan, they wouldn’t be able to sell enough to recoup all of their overhead expenses, meaning that as a company they would take a loss without their American business; so this strategy of distributing cars to the United States is critical to their continued growth, success, and prosperity as a company.

Let’s fast forward a year, and let’s say that we’ve seen the exchange rate move down to ¥75.00 per $1. This means the yen has strengthened 25% and business has just gotten much more difficult for exporters in Japan.

While it cost the same ¥2,000,000 to produce the automobile as last year, and the same ¥500,000 to ship and sell the product; the exchange rate has made a large difference to our company.

If they want to use the same price points as the year before, they may be forced to take a loss. Since the Yen is now more expensive against the dollar, our company will probably be looking at a reduced profit. The below table will walk through a scenario in which we keep the price the same in the face of a strengthening currency.

Notice that while production costs and the selling price remained the same as the year before, the change in the exchange rate means that what was previously a ¥500,000 gain is now a ¥250,000 loss.

A change of ¥750,000 in only one year has taken place for each automobile sold, and this is solely because the Japanese are looking at a more expensive yen.

This can have a grave impact on an economy, particularly one that relies on continually exporting goods.

As you can imagine, this is not a strong business strategy that many Japanese companies are interested in entertaining over the long-term, so it’s time to look at some alternative business strategies.

Let’s say that our company wants to ensure themselves of a profit. So they do the math and they see that they can gleam a profit if they raise the price to $35,000. The table below will illustrate this change in price.

Raising the price to $35,000 per car means they could possibly profit ¥125,000 per unit. This is half of what the profit was from the year before; but we have to anticipate another effect entering into the equation; and that’s the consumer.

Consumers notice that the same car that cost $30,000 the year before now costs $35,000 – an increase of almost 15%. Now customers are looking at other makes, other models, and any other car where they can get more for their money.

Not only do you, as a company, have to contend with decreasing demand from consumers scared away by higher prices (the term sticker-shock comes to mind); you also have to deal with your own shareholders that are unhappy that profit has decreased so greatly while sales have remained constant.

So while the price of $35,000 might bring the company a profit, it may not be a requisite option as it can upset both consumers, and your own shareholders. So the company explores even higher price points.

A selling price of $40,000 could potentially pacify shareholders, so you entertain that option as well. The table below shows the potential profit margin with a $40,000 selling price.

The answer, most likely, is no.

The fact of the matter is that consumers are price conscious, and changes in prices such as what we looked at above, changes of 15% or 30% can often cause consumers to look to other products or manufacturers.

This is one of the primary reasons that Japanese stocks have fared so poorly when their currency has strengthened so much. The below chart illustrates the Japan 225 CFD (based on Japanese stocks) since the opening of the year 2000. In April of 2000, Japanese stocks hit a ‘High-Water Mark,’ of 20,833 as shown on the chart below: 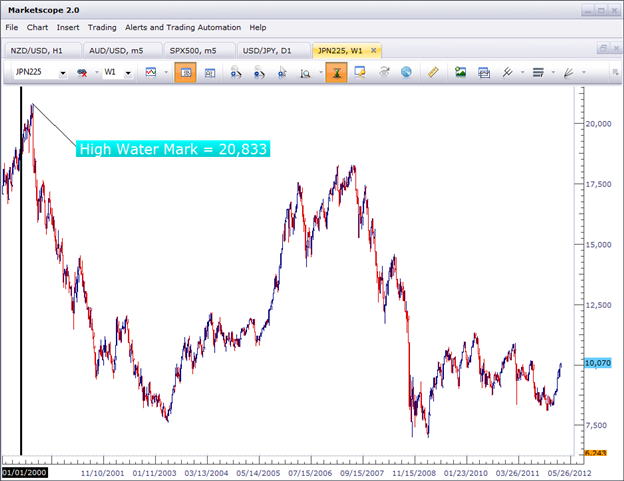 The above chart shows a stark down-trend, accented by the economic recovery that eventually became the Financial Collapse of 2008. The part that would perplex many traders is to notice the chart of the USDJPY currency pair over the same period. 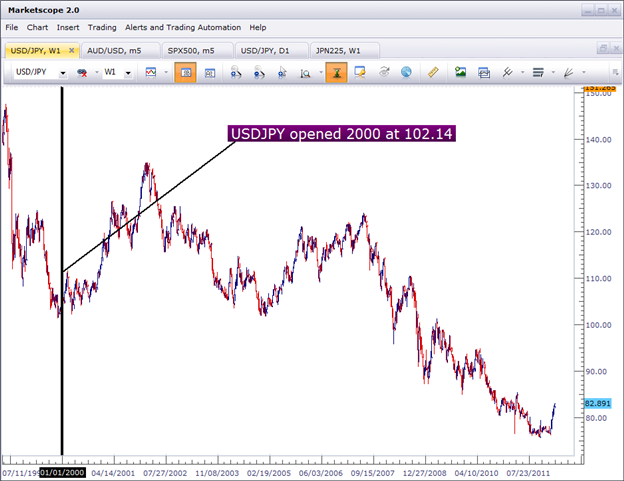 Keep in mind, as the Yen is the counter-currency in this pair, decreases in price denote strength.

From the above 2 charts, the relationship that becomes clear is that as the Yen has strengthened, we’ve seen investors selling Japanese stocks.

The big reason that this takes place is because reality isn’t nearly as flexible as what we had prescribed in our analogy. Consumers care about prices; and when prices increase they will often look elsewhere to other manufacturers, other products, or other markets to fulfill their needs.

While the economy of Japan holds hope on this most recent rally, it’s important to keep in mind the multiplier effect that can be carried by movements in their currency.

But if they have to stare into the face of a constantly appreciating currency unit, the future is not bright, for Japan or any other export nation.

Key Terms, Names and Acronyms that FX Traders Should Know