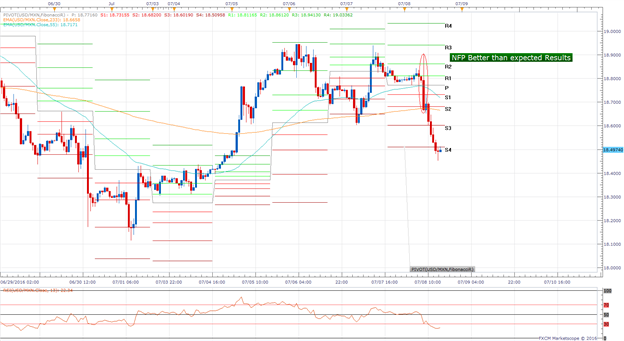 Is it time for MXN to make a comeback vs. US Dollar?

Are you Interested in becoming a better trader? Check out the guide that DailyFX compiled from the traits that characterized the Most Successful Traders.

Despite the better than expected Nonfarm Payrolls results that outperformed estimates by 112k with a reading of 287k, the USD/MXN traded with strength to the downside in today’s trading session. Peso strength took the cross below the S4 of the Daily Fibonacci Retracement Pivot Points by the end of the trading session.

In addition, the USD/MXN broke below the 233 EMA, a level which it failed to break in the previous trading session. This technical development could be a signal that the Mexican Peso might be gaining momentum to the downside.

On a bigger picture for the USD/MXN, we have two scenarios that the cross could be facing in the upcoming future. 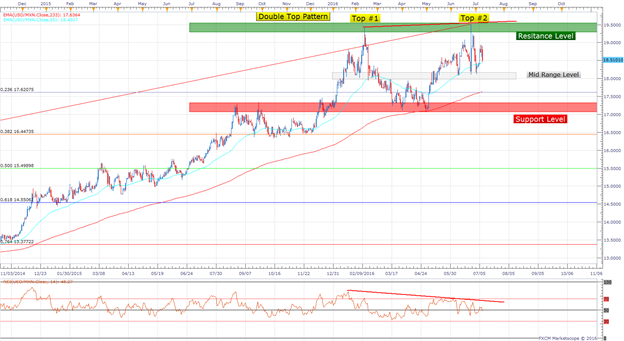 As we can observe from the chart above, after the Brexit referendum held in the U.K. this past June 23, the USD/MXN registered an all-time high level for the cross at 19.5174, a level that only slightly passed the previous high of February 11. With the previous price action mentioned, a double top pattern seems to be forming. A breakdown should be on your radar.

If this scenario is the one that develops, then we will see that the Mexican Peso will continue strengthening looking to reach the 17.1500 Support price level and from there the cross will try to break below this key level for a target of the same size of the pattern.

For our second scenario, instead of the USD/MXN breaking below the Support level validated by the highs of August/September of 2015 and the lows of April of 2016 the cross could start trading in this range. This situation would put momentum back on the back of the USD and would make the cross look for prior resistance price levels.

In both of these scenarios, momentum to the upside seems to have been exhausted, as a big divergence has appeared between RSI and price. Such divergence is a huge signal for downside movement.

However, not everything will be easy from now on for the Mexican peso to the downside given that the 55 EMA on a daily chart has proven to be a good support level for the cross, and the 233 EMA has not broken since 2014.