With so many currency pairs to choose from, it can often be overwhelming for a new trader to decide which currency pair to trade. To decide which pair is optimal for trading we should sort our options by considering both trend and rollover rates. Today we will specifically be comparing the EURJPY and AUDJPY currency pairs to see the advantages of trading Euro crosses in present market conditions.

Regardless of your trading strategy, it is important to evaluate the direction of the trend. Above we have daily charts for both the EURJPY and AUDJPY. Looking at the EURJPY we can see the pair is working on creating new lows under 94.46, and declined as much as 1716 pip through present prices. On the other hand the AUDJPY has declined as much as 1417 pips through the same time frame, but has not established a new low in over 6 weeks. Both pairs are trending lower from their 2012 highs in March, that much is clear but we can see that momentum is clearly on the side of the EURJPY.

With the EURJPY making lower lows and having a stronger trend, which pair would you prefer to be trading? 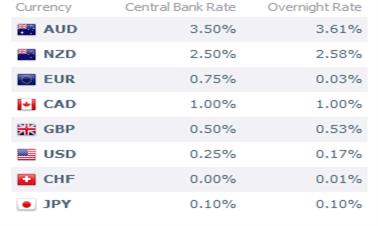 Strength of trend is not the only consideration we should take into account when opening a position. Every good trader will always keep their eye specifically on costs that can eat into potential profits. Rollover is one of those factors, and can either work in your favor or against it. As each individual currency has an interest rate associated with it, as set by their central reserve bank, traders have the potential to earn or pay interest based off of these numbers. Ultimately this will be decided if we are holding a currency with a higher or lower overnight interest rate. You can find a list of current overnight and central banking rates listed above, but let’s again shift our attention to compare our EURJPY and AUDJPY pairs.

Since we are looking to sell both pairs with the trends mentioned above, we need to focus our attention on RollS. RollS is the amount we will either be paying or earning for selling either the EURJPY or AUDJPY currency pair. We can find this number inside of our trading platform and is displayed above in the dealing rates window for both the EURJPY and AUDJPY currency pairs. Notice the highlighted RollS boxes and how we are paying $1.43 in rollover per lot traded on the AUDJPY? This is due to the fact that the Aussie Dollar maintains a much stronger banking rate relative to the Japanese Yen.

The EURJPY currency pair is exactly the opposite. We actually get paid $00.02 for selling this currency pair! While getting paid 2 cents a lot in profit is not exactly a windfall, we are not paying for the privilege of selling the currency pair as we are for the AUDJPY. Taking this into account, rollover is an additional advantage of trading a Euro cross over another currency pair. And the Winner is?

As we can see through the analysis above, it is beneficial to consider different currency pairs prior to executing a trade. With momentum and rollover clearly on the side of Euro crosses they ought to be sought out for future selling opportunities. It should be noted that the EURJPY is not the only Euro cross available for trading. The EURUSD, EURGBP, EURAUD and others can all offer exceptional trading opportunities. What currency pair will you be trading?