The Gross Domestic Product growth rate of a country is another highly anticipated event on the economic calendar such as Non-Farm Payrolls. GDP growth looks specifically at changes in growth patterns by adding household consumption, government spending, domestic investment’s, and net exports for a country. As growth increases it is assumed there will be a high demand for a nation’s currency. This is due to the likelihood of inflationary pressures in the market place, with central banks looking to potentially change monetary policy due to these results.

As the most important growth figure for a nation, GDP is tracked on a nation by nation basis. The next GDP announcement for the UK is set to take place next Wednesday March 28th at 4:30am New York time. As with any news event, numbers released outside of the predicted values can bring volatility and increase the likely hood of a breakout. This month GBP GDP (QoQ) is expected to be released at -.2%. Expectations are already set for negative growth; any further decline could cause a severe reaction on the British Pound.

Below we can view the current 4Hour chart of the GBP/USD. A triangle patter is forming by connecting highs starting with the February 29th high at 1.5991. Ascending support is created by connecting a series of wicks beginning with the March 12th low at 1.5601. Expecting active markets around the timing of the news event, we can begin planning for a breakout. Entries can be set below for support in expectations of prices moving lower on bad GDP data. Conversely, GBP/USD bulls can place orders above resistance in the event of better than expected data. 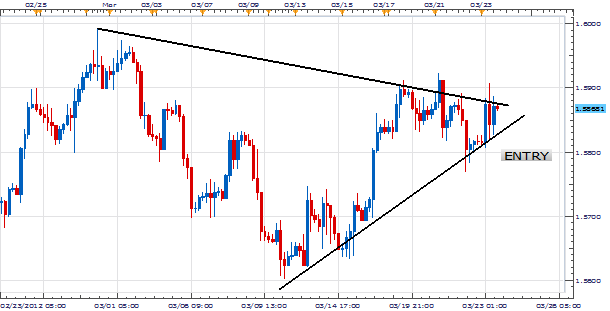 My preference is to set entries to sell the GBP/USD under 1.5800. Stops should be placed above resistance near 1.5865. Limits should first target 1.5680 for a clear 1:2 Risk/Reward ratio. Secondary targets can be placed under 1.5600 on an extension of downward momentum.