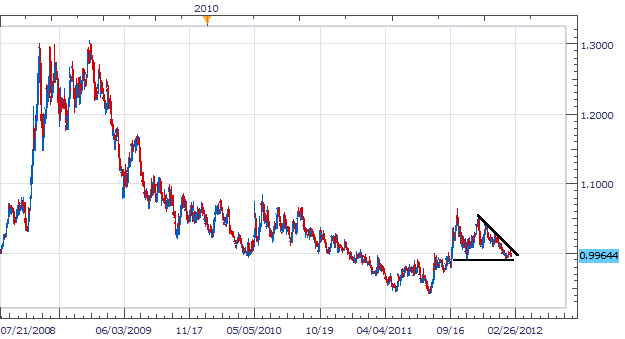 The USD/CAD has held an established downtrend from the 1.3063 high created in March of 2009. From this point the market has moved as much as 3658 pips lower to its standing low of .9405, printed in July 2011. After a sharp rise in price in the fourth quarter of 2011, price has resumed its decline in the first two months of 2012. As price descends, traders will look for new lows to initiate new orders to sell the USD/CAD.

Taking price in on the 4Hour chart on the USD/CAD allows us to better see the emerging triangle pattern. Currently price is consolidating in a descending triangle pattern supported by the October 2011 low at.9891. As price grinds down to this support price, breakout traders will begin looking for entry orders under this level in the direction of the longstanding downtrend. Stops can be placed above resistance, created by connecting the Nov – Dec 2011 and January 2012 highs. 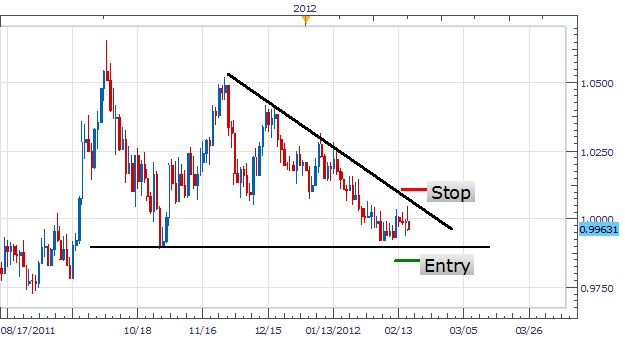 My preference is to sell the USD/CAD under support near .9875. Stops should be placed outside of resistance near 1.0075. Limits should be set target a minimum 400 pips profit at .9475 to employ a 1:2 Risk / Reward ratio.

Alternative scenarios include prices breaking higher, over resistance. For further discussion on trading triangles, join me inside of DailyFX Plus for a live Webinar Friday at 1PM .