A familiar pattern could be playing out again in USD/JPY. Should the pattern hold, a breakout to and through recent highs of 125.82 is likely near. The pattern has played out as follows:

Recently, the US Dollar has played a large role ensuring that USD/JPY does not stay offered for long. However, as US Dollar faces unfavorable resistance in the form of the March 13th price range, the hope of more BoJ action could be the next catalyst.

A break above the August 24th daily candle should be your guide going forward where a close outside the extremes what express confidence in a new directional move. The downside continuously fails to gain traction as seen by the rejection off the October low at 118.10. We are now within 100 pips of an August 24th range breakout, and a hotly anticipated BoJ meeting could drive us through resistance.

USD/JPY also has positive correlation with the SPX500, which is recently moved much higher up the August 24 low. In fact, the last time the SPX500 was trading near 2100 was mid-August. At that time, USD/JPY was in the 123-124 area. Therefore, if risk appetite remains where it is and does not deteriorate, another credible argument could be for higher USD/JPY as well. 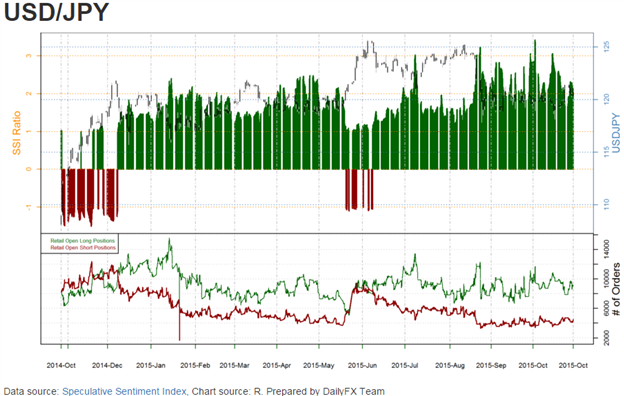 The ratio of long to short positions in the USDJPY stands at 2.00 as 67% of traders are long. Short positions are 9.9% higher than yesterday and 3.7% above levels seen last week. We use our SSI as a contrarian indicator to price action, and the fact that the majority of traders are long provides asignal that the USDJPY may continue lower. However, due to central bank action, the bias has remained long similar to CHF crosses pre-January 15th. The weekly increase in short positions could be telling of a potential move higher around the corner. 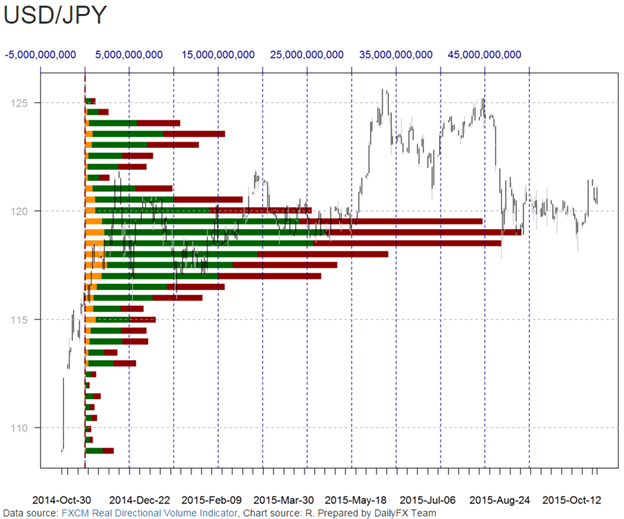 USDJPY has bounced off significant Volume at Price support level around 118/119. We are close to a Bank of Japan announcement that could put us close to YTD highs. A year ago, USDJPY bottomed on October 15th, 2014 and would then accelerate from 110 to nearly 126. Depending on what’s in store for the USD and or the JPY a similar analog move could soon develop.