USD/JPY continues to trade near the high for 2018, despite a bearish shift in the fundamental backdrop for the pair. In the past two weeks, dovish comments from Fed officials Powell, Clarida and Bostic have weighed on rate hike expectations and could suggest the hawkish nature of the Fed has reached its peak.

The Fed’s hawkishness has long been priced into the pair and has acted as a lingering tailwind for the Dollar. Given the recent shift in commentary from Fed officials, that tailwind may weaken, and a broader market reevaluation of the pair could take place. This presents an intriguing short set-up. 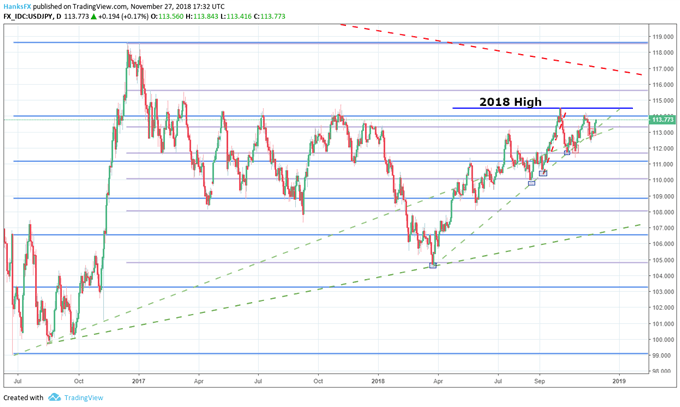 With the pair near 113.80, upside potential appears limited with the 2018 high around 114.50 and 23.60% Fibonacci resistance at the psychological 114 level. The pair has followed the trend-line higher from March but has repeatedly tested and broken below in recent weeks. Coupled with a series of lower highs, the technical landscape suggests bulls may be tired and a re-test of 114.50 seems unlikely. 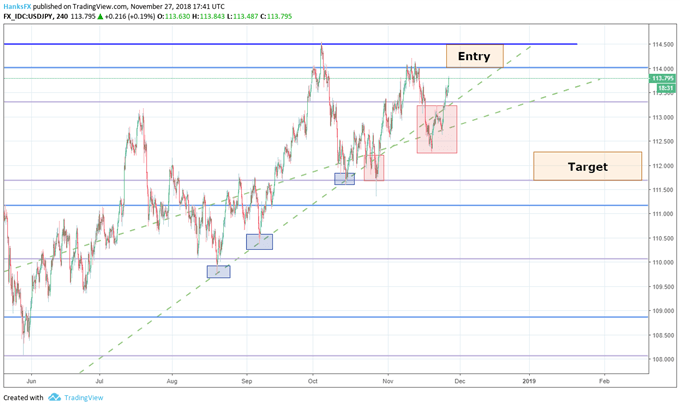 With that in mind, I will look to enter my short position in the 114 region with a stop at 114.60 which would mark a fresh high for 2018. At this time, 112 is targeted but updates and subsequent reevaluations of the trade set-up may see that change.

The foundation for a short has been laid but risks remain. Fed comments, particularly from Chairman Powell could derail the short-term outlook for the pair. However, on a longer-term basis I expect commentary to continue to move away from the ultra-hawkish stance.

Check out our economic calendar for upcoming events this week that range from US GDP data to speeches from Fed Chairman Jerome Powell.

Another risk is the implementation of auto tariffs on Japan by the United States. This would be a substantial development in the ongoing trade wars and would likely have a period of posturing and debating before pursued. Any news of a trade war escalation between the United States and Japan would constitute a reevaluation of the trade in full.