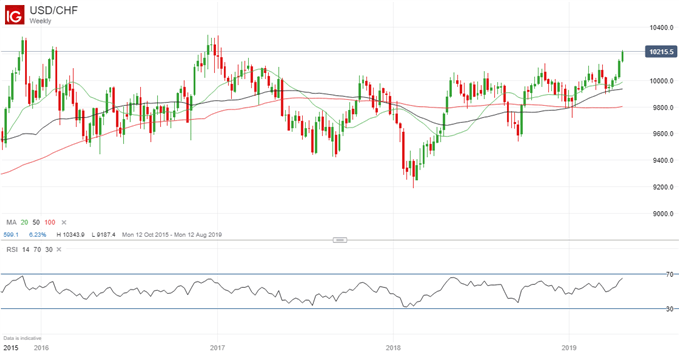 The Swiss Franc has weakened significantly over the past month as a lack of volatility in the markets has reduced demand for safe havens. That has boosted USDCHF to its firmest levels since late December 2016 and early January 2017.

However, the price is now approaching the highs reached back then, suggesting that any further gains could be limited. As the weekly chart below shows, USDCHF reached a peak of 1.0344 – not far from the current 1.0215 – and that level will be very hard for the pair to break through.

The price is also heading towards overbought levels, with the 14-week relative strength index at the bottom of the chart approaching the 70 mark. Moreover, there is little support before the 1.00 “round number” and the 20-week moving average just below it, suggesting that any correction could be quite steep.

Currently, IG client sentiment data show that retail traders net-short USDCHF outnumber those net-long by some four to one. At DailyFX we tend to take a contrarian view of crowd sentiment and that implies the price could rise further. However, those traders are currently less net-short than they were, suggesting that a peak for the pair could be close.

You can read more about USDCHF here