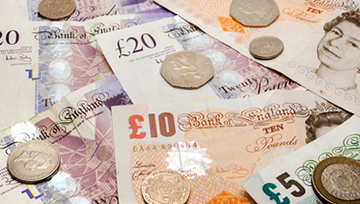 GBP/CHF Could Have Further to Fall

Check out our new Trading Guide for GBP: it’s free and has been updated for the third quarter of 2017

There are two important themes in the currency markets at present, and selling GBP/CHF is a way to capture both. The first is risk aversion, caused by the increasingly hostile and threatening language employed by both US President Donald Trump and North Korea’s Supreme Leader Kim Jong-un. The second is the current weakness of the UK economy as Brexit approaches, albeit at a snail’s pace.

For traders who think the standoff between the US and North Korea will worsen before it gets better there are several currency alternatives, including the Japanese Yen and the Swiss Franc. But why buy the Yen when Japan lies on the direct route from North Korea to the threatened US island territory of Guam? Switzerland would seem to be a better bet, in the relative safety of Europe.

As for the UK, the latest economic data have been poor, including news Thursday of a fall in construction output month/month in June, flat manufacturing output and a larger trade deficit. For more details you can listen to a recording of my live webinar here.

The figures inevitably reduce the chances of the Bank of England tightening monetary policy and therefore weakened the Pound Thursday against most other currencies, including the Swiss Franc.

Putting the two themes together – if you’re looking for a safe haven and expect the British Pound to weaken further – selling GBP/CHF makes a lot of sense. Data from the respected National Institute of Economic and Social Research, also released Thursday, estimated that UK GDP in the three months to July grew by just 0.2% quarter/quarter, down from 0.3% growth in Q2.

That suggests next week’s UK data for July, including inflation, jobless claims and retail sales, could surprise to the downside and bolster the case against Sterling. My colleague Nick Cawley will be looking at the numbers tomorrow in his weekly Key UK Events and Markets for the Week Ahead webinar, which you can register for here.

As for the technical picture, the chart above shows that GBP/CHF has been in a downtrend since the beginning of August, with little support before the long-term trendline is reached at around 1.23 – a possible first target if the current move continues.