EUR/USD remains bid ahead of the Federal Reserve meeting amid the failed attempt to test the August-low (1.1301), but the exchange rate may continue to track a broad range ahead of 2019 as monetary policy in Europe and the U.S. appears to be on a preset course.

Recent remarks from the European Central Bank (ECB) suggest the Governing Council is in no rush to alter the forward-guidance as ‘measures of underlying inflation remain generally muted,’ and it seems as though President Mario Draghi & Co. will retain the zero-interest rate policy (ZIRP) for the foreseeable future as officials expect borrowing-costs to ‘remain at their present levels at least through the summer of 2019.’

As a result, attention now turns to the Federal Open Market Committee (FOMC), with more of the same from Chairman Jerome Powell & Co. likely to keep EUR/USD afloat as the central bank is widely expected to keep the benchmark interest rate on hold. 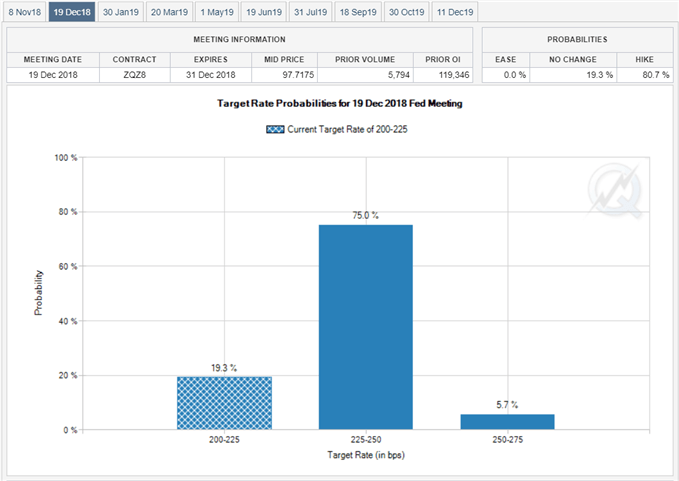 However, the FOMC may use the November meeting to prepare households and businesses for higher borrowing-costs as policymakers show no indications of deviating from the hiking-cycle, and Fed Fund Futures may continue to reflect expectations for a move in December as officials ‘generally anticipated that further gradual increases in the target range for the federal funds rate would most likely be consistent with a sustained economic expansion, strong labor market conditions, and inflation near 2 percent over the medium term.’

With that said, the Federal Reserve may push a more hawkish forward-guidance ahead of its last meeting for 2018, and the policy statement may ultimately tame the recent rebound in EUR/USD should a growing number of Fed officials show a greater willingness to extend the hiking-cycle. Sign up and join DailyFX Currency Analyst David Song LIVE for an opportunity to discuss potential trade setups. 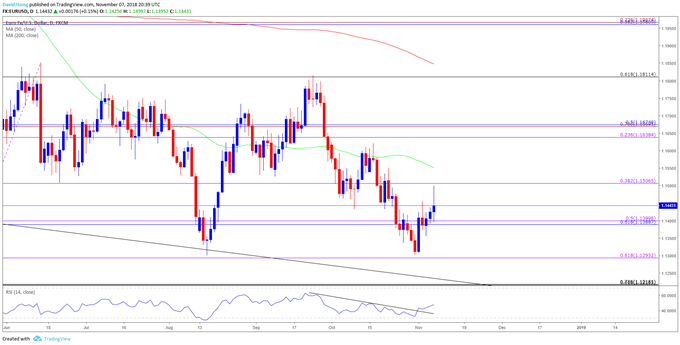 The failed attempt to test the August-low (1.1301) may generate a near-term rebound in EUR/USD, with the Relative Strength Index (RSI) highlighting a similar dynamic as the oscillator breaks out of the bearish formation carried over from late-September. In turn, a break/close above the 1.1510 (38.2% expansion) region raises the risk for a move back towards the Fibonacci overlap around 1.1640 (23.6% expansion) to 1.1680 (50% retracement), with the top of the broader range capped by the 1.1810 (61.8% retracement) region.