EUR/USD appears to be stuck in a near-term holding pattern as it bounces back from the weekly-low (1.1527), but the broader outlook remains tilted to the downside as both price and the Relative Strength Index (RSI) track the bearish formations from earlier this year.

The Euro remains at risk of facing additional headwinds over the coming months as the European Central Bank (ECB) remains in no rush to conclude its easing-cycle, and the lack of urgency to remove its non-standard measures are likely to sap the appeal of the single currency as the central bank looks to carry the zero-interest rate policy (ZIRP) well into 2019.

Recent comments by ECB board member Philip Lane suggest the Governing Council will keep the door open to further support the monetary union as the official argues ‘inflation is recovering but we are still far below target and continued policy is needed.’ In turn, the ECB may continue to endorse a wait-and-see approach at the next meeting on July 26, with EUR/USD at risk of extending the decline from late-April especially as the Federal Open Market Committee (FOMC) appears to be on track to deliver four rate-hikes in 2018. Sign up and join DailyFX Currency Analyst David Song LIVE for an opportunity to discuss potential trade setups! 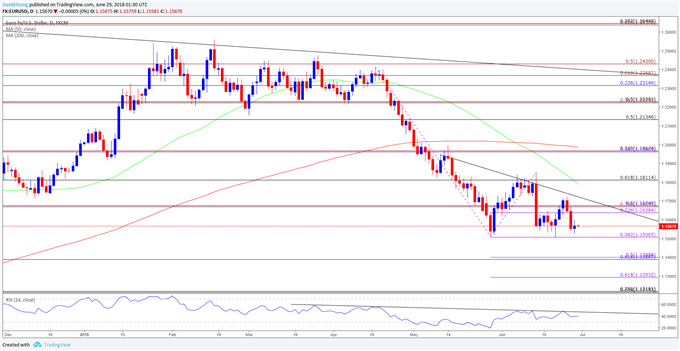 EUR/USD appears to be consolidating within a wedge/triangle formation after staging a failed attempt to test the monthly-high (1.1852), with a break of the 1.1500 (38.2% expansion) handle opening up the downside targets as both price and the Relative Strength Index (RSI) extend the bearish formations carried over from earlier this year. First downside region of interest comes in around 1.1390 (61.8% retracement) to 1.1400 (50% expansion) followed by the 1.1290 (61.8% expansion) hurdle.