EUR/USD is back under pressure following a batch of positive data prints coming out of the U.S. economy, and the pair faces a renewed risk of making a run at the December-low (1.1718) as the bearish momentum from earlier this year appears to be reasserting itself.

Even though the economic docket remains fairly light for the remainder of the week, a slew of Federal Reserve officials are scheduled to speak over the coming days, and the fresh remarks may influence the near-term outlook for the euro-dollar exchange rate as the central bank appears to be on track to implement higher borrowing-costs over the coming months. 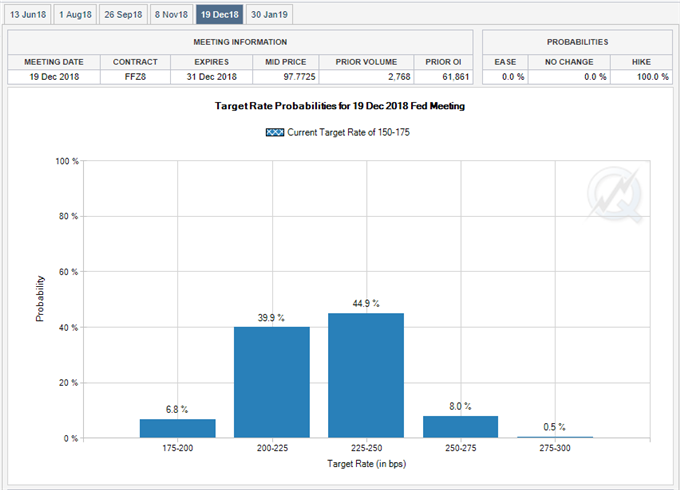 The 2018-voting members on the Federal Open Market Committee (FOMC) may strike a hawkish tone as the board largely achieves the dual mandate for monetary policy, and Chairman Jerome Powell and Co. may show a greater willingness to extend the hiking-cycle at the next quarter interest rate decision in June as ‘the Committee expects that economic conditions will evolve in a manner that will warrant further gradual increases in the federal funds rate.’

At the same time, remarks from European Central Bank (ECB) President Mario Draghi may generate headwinds for the single-currency as the Governing Council remains reluctant to alter the forward-guidance for monetary policy, and more of the same from the central bank head may fuel the recent weakness in EUR/USD as euro-area policymakers remain reluctant to move away from the zero-interest rate policy (ZIRP).

However, Fed officials may stick to the same tune as ‘inflation on a 12-month basis is expected to run near the Committee's symmetric 2 percent objective over the medium term,’ and comments highlighting a greater tolerate for above-target price growth may drag on the greenback as it saps bets for four rate-hikes in 2018. Moreover, the Euro may catch a bid should ECB officials start to reveal a more detailed exit strategy, and a material shift in central bank rhetoric may spark increased volatility in the EUR/USD exchange rate as market participants prepare for the end of the easing-cycle. Sign up and join DailyFX Currency Analyst David Song LIVE for an opportunity to discuss potential trade setups! 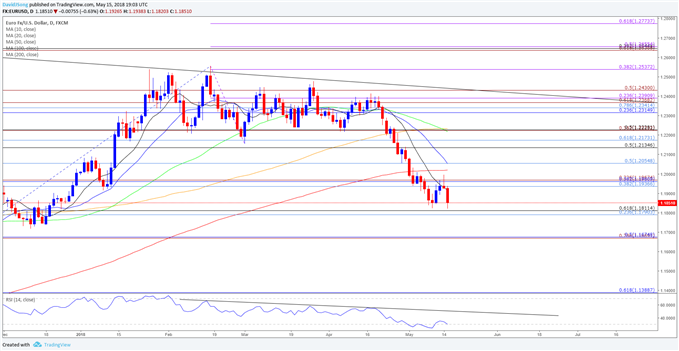 Failure to preserve the range from earlier this year dampens the broader outlook for EUR/USD, with the pair at risk for further losses especially as the Relative Strength Index (RSI) extends the bearish formation from earlier this year. Recent price action keeps the downside targets on the radar as euro-dollar snaps the bullish sequence from the previous week, while the bearish momentum appears to be reasserting itself as the RSI pushes back into oversold territory. The failed attempts to close above 1.1940 (38.2% retracement) to 1.1970 (23.% expansion) caps the near-term outlook for EUR/USD, with a break/close below the 1.1790 (23.6% retracement) to 1.1810 (61.8% retracement) raising the risk for a run at the December-low (1.1718).