EUR/USD struggles to hold its ground following the fresh updates coming out of the Federal Reserve as Chair Janet Yellen and Co. continue to project three rate-hikes for 2017.

It seems as though the Federal Open Market Committee (FOMC) will embark on a more aggressive approach in normalizing monetary policy as the quantitative tightening (QT) initiative is slated to start in October, while the benchmark interest rate is projected to reach a fresh threshold of 1.25% to 1.50% by the end of the year. Renewed expectations for a December rate-hike may prop up the greenback over the near-term, but central bank officials may continue to project a terminal Fed Funds rate close to 3.00% as ‘the Committee expects that economic conditions will evolve in a manner that will warrant gradual increases in the federal funds rate.’

At the same time, the European Central Bank (ECB) appears to be on course to conclude its easing-cycle as board member Klaas Knot argues the ‘the main rationale for central bank asset purchases has disappeared,’ and the Governing Council may prepare European households and businesses for a less-accommodative stance as ‘the economic expansion, which accelerated more than expected in the first half of 2017, continues to be solid and broad-based across countries and sectors.’ In turn, fresh remarks from President Mario Draghi may limit the downside risk for the Euro exchange rate as the central bank alters the outlook for monetary policy. 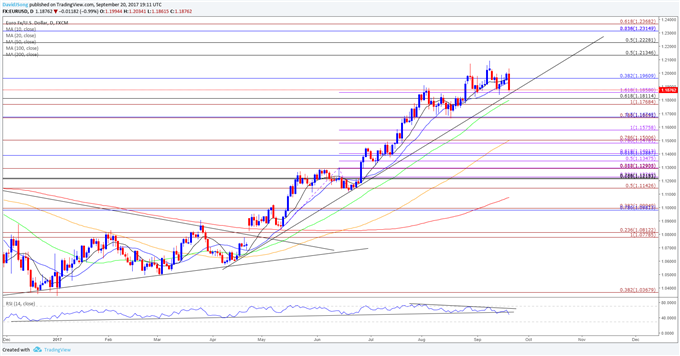 Downside targets are coming back on the radar for EUR/USD following the failed attempt to test the 1.2130 (50% retracement) hurdle, with both price and the Relative Strength Index (RSI) coming up against trendline support. Failure to preserve the bullish formations from earlier this year may open up the 1.1770 (100% expansion) zone, with the next region of interest coming n around 1.1670 (50% retracement),which lines up with the August-low (1.1662).