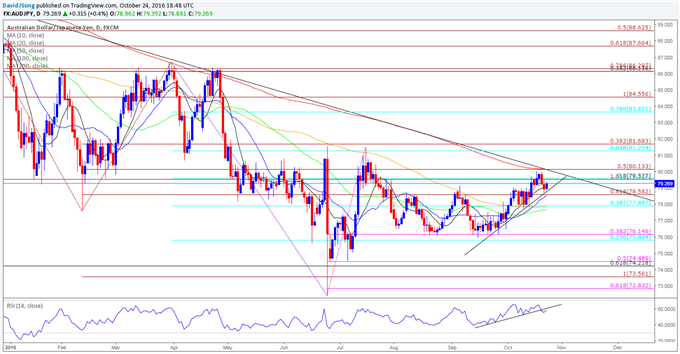 The near-term advance in AUD/JPY appears to be getting exhausted, with the pair at risk of resuming the downward trend carried over from late-2014 as it appears to have made another failed attempt to break the 200-Day SMA (80.14).

With market attention turns to the key developments coming out of Australia, a series of dismal data prints accompanied by dovish rhetoric out of the of Reserve Bank of Australia (RBA) may drag on the local currency especially as the central bank anticipates the low-inflation environment to ‘remain the case for some time.’ In contrast, the Bank of Japan (BoJ) may stay on the sidelines as Governor Haruhiko Kuroda and Co. assess the impact of the ‘yield-curve control’ dynamic for its quantitative/qualitative easing (QQE) program, and the near-term weakness in the Japanese Yen may largely unravel should the central bank endorse a wait-and-see approach for the remainder of the year.

With that said, AUD/JPY stands at risk of facing increased volatility going into the slew of interest rate decisions lined up for November, and the recent developments in the Relative Strength Index (RSI) casts a bearish outlook for the exchange rate as the oscillator fails to retain the bullish formation carried over from the previous month. In turn, it may only be a matter of time before price follows the RSI, with a break/close below 78.60 (61.8% expansion) opening up the next downside target around 77.90 (38.2% retracement) followed by the Fibonacci overlap around 75.80 (23.6% retracement) to 76.10 (38.2% expansion).