Chinese Yuan Remains Vulnerable to Divergence Between the Fed and PBOC

In mid-June, I wrote an analyst pick warning about the fundamental forces that pose a risk to the Chinese Yuan. Since then, USD/CNH climbed about 3.5 percent, rising to 6.90 from 6.67. Following a period of consolidation, August was the best month for the exchange rate since April. Is there more room for the US Dollar to continue its upward trajectory? It seems so.

The fundamental premise remains largely the same. When it comes to trading currencies, ideally, we want to find pairs where central banks are the most divergent. In the case of USD/CNH, the Federal Reserve is clearly hawkish. Throughout the summer, traders priced in expectations of a pivot for 2023. In August, the markets spent most of their time trimming those estimates.

This was especially the case following the annual Jackson Hole Economic Symposium. There Fed Chair Jerome Powell reiterated the central bank’s fight against inflation, as well as alluding to the possibility of some economic pain. As a result, the markets almost completely took away 50-basis points of easing that was priced in for next year.

What about the People’s Bank of China (PBOC)? Compared to the Fed, it is quite the opposite story. The world’s second-largest economy is facing growth woes. On Wednesday, manufacturing activity continued shrinking. Last week, the government announced an additional 1 trillion in economic stimulus to cope with a combination of slowing growth, Covid restrictions and the fallout of a weakening housing sector.

In the chart below are updated figures on Chinese export growth estimates compared to June. Two key things happened. The first is that third-quarter 2022 is seen higher at 8.9% y/y from the 6.0% estimate in June. However, next year’s outlook has notably flattened to the low single digits.

China’s outward-facing economy is quite sensitive to global growth estimates. Tightening monetary policy around the world poses a risk. CNH/USD can be seen closely tracking Chinese exports below. If further weakness is realized, this may not bode well for the Yuan.

In mid-August, USD/CNH confirmed a breakout above the May peak (6.8376). That subsequently opened the door to extending the dominant uptrend towards peaks in 2019 and 2020. There is still some ways to go. In the interim, immediate resistance appears to be the 61.8% Fibonacci extension at 6.946 followed by the 78.6% level at 7.0353. Meanwhile, the near-term rising trendline from early August appears to be key support. Confirming a breakout under could open the door to extending losses. But, the 50- and 100-day Simple Moving Averages (SMAs) could hold as support, maintaining the upside focus. 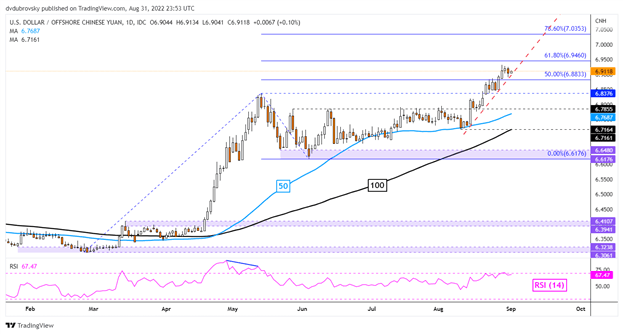