The word ‘defensive’ does not exactly appeal to most people looking for a stock in which to invest, but defensive stocks have proven critically important when navigating stock market volatility and more importantly, market crashes. Their biggest appeal is that they tend to shield investors during financial recessions or crashes as diversification reduces the correlation of investments held within a portfolio.

However, defensive stocks are not just useful during recessions; they can also appeal to traders with lower risk tolerances (i.e. looking for less volatility in their investments) simply looking to preserve their capital. This article explains what defensive stocks are, why they are useful and how traders or investors can benefit from trading them.

If you are new to stock trading, you may want to read about stock market basics, for an introduction into the world of stock trading.

What is a Defensive Stock 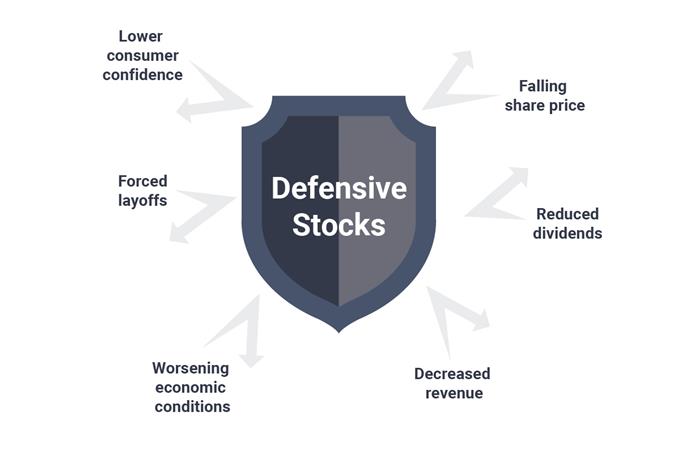 Defensive stocks, also known as ‘non-cyclical stocks’ or ‘safe haven stocks’ comprise of companies that experience little variation in earnings and dividend payouts regardless of the state of the overall economy. Therefore, a defensive stock provides consistent dividends and stable earnings across market conditions. In general, this is because defensive stocks produce goods or services that are considered to be essential, meaning that the demand for these goods/services remain rather consistent.

It is important to note that holding defensive stocks provides no guarantee against negative returns; however, defensive stocks have historically weathered economic recessions better than cyclical stocks, which tend to track momentum of the underlying economy in the near-term.

What are the most defensive stocks

Defensive stock examples can be found within the utility, healthcare and consumer staples stock market sectors and generally exhibit the following characteristics:

The stock market affects the economy in many ways and none more so than a severe recession or market crash. Market crashes like the Global Financial Crisis in 2008/2009 result in mass retrenchments, forced liquidations of large companies and government bailouts for sectors that pose a systemic threat should they fail.

During times of economic turbulence, investors attempt to shield themselves from assets that are declining in value and some of the worst performing assets tend to be cyclical stocks – stocks that are strongly correlated to the underlying economy. However, defensive stocks have often outperformed the overall equity market during market crashes with their desirable non-cyclical qualities.

An effective way to illustrate the tendency of defensive stocks to outperform during times of turbulence is to compare the performance of a defensive stock to its broader equity market’s performance over the same timeframe. For defensive stocks traded in the United States, you’ll want to look at the relative performance compared to one of the major indices, the Dow Jones Industrial Average, the S&P 500, or the NASDAQ 100.Below is a chart of the S&P 500 during the 2008/09 financial crisis. It is clear to see that the US equity market, as a whole, experienced a drastic decline. The S&P 500, due to its components, has a large weighing in cyclical stocks that suffered tremendously during this time – driving the index lower. 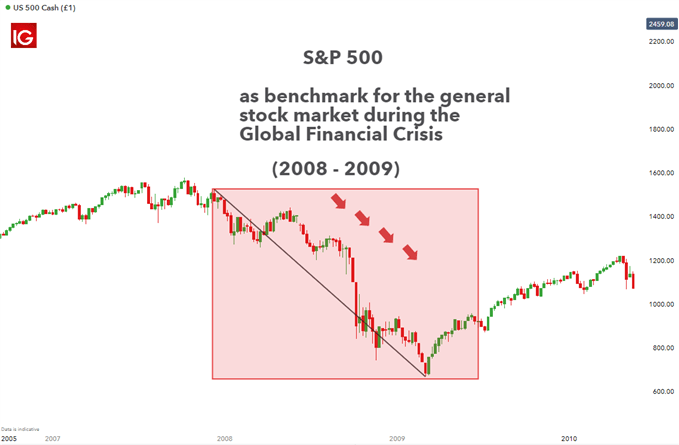 To the contrary, Gilead Sciences, a biopharmaceutical company, managed to endure the financial crisis and come out at similar levels at whichit entered. Their share price rose sharply, dropped sharply and then consolidated to leave the share price a lot better off than most cyclical stocks. Intuitively, this makes sense: consumers will demand healthcare and drug treatments regardless of the state of the economy. To this end, biopharmaceutical and healthcare stocks tend to be defensive stocks as they are counter-cyclical in nature. 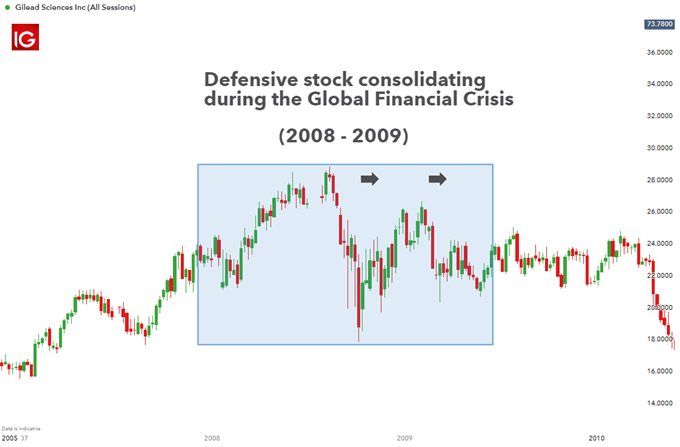 It is crucial to note that defensive stocks do not necessarily rise in value during economic downturns. They may rise, hold value or even decline, nevertheless, they are desirable because they tend to outperform the wider stock market during crashes.

Thankfully defensive assets are not restricted to the equity market but expand to other markets such as the forex market, the commodity market and the bond market.

US Dollar, Euro, Japanese Yen and Swiss Franc are often regarded as safe haven currencies because they tend to be negatively correlated with stocks during market crashes. In general, these defensive currencies have current account surpluses, strong financial systems, relatively low government debt to GDP, stable economic growth and sufficient liquidity among other desirable characteristics. It’s crucial to note that safe haven currencies won’t necessarily have all these characteristics but will certainly benefit from most of them.

Defensive commodities: Gold is universally recognized as a safe-haven metal because there will always be a demand for the metal (i.e. jewelry and some industrial uses) and its supply is naturally limited to the amount of gold that can be mined in all the earth. This is different to currencies because central banks can increase the supply of money via monetary policy which runs the risk of reducing the value of the currency through inflation. Of course, little needs to be said about gold’s special place in monetary affairs throughout human economic history.

Are defensive stocks only beneficial during recessions?