The Dow Jones: What is it & Why is it Relevant to Traders?

The Dow Jones Industrial Average (DJIA) is a major stock market index tracking the performance of the very largest US companies. As perhaps the definitive measure of financial market strength, it is one of the most quoted financial barometers in the world. In this piece, we detail what the Dow Jones represents, its history, how it’s calculated, and how to go about trading it.

What is the Dow Jones?

The Dow Jones is a stock index that tracks the performance of 30 of the biggest companies in the US. It is a price-weighted index, meaning its value is based on the price of its constituent shares rather than alternative measures such as market capitalization.

The main purpose of the Dow is to give key insights about the health of the US stock market and even the economy as a whole. Traders turn to the Dow as a benchmark against which the relative performances of individual stocks can be measured.

The DJIA comprises 30 blue-chip companies, traded on both the NYSE and Nasdaq. While originally devised to track the performance of US industrial output (manufacturing), its constituent companies now hail from sectors including telecommunications, energy, tech, pharmaceutical and entertainment to better reflect the modern US economy.

Changes are sometimes made to ensure that the Dow continues to display an accurate cross-section of the US equity market. In 2015, for example, Apple replaced AT&T. As of October 2019, the 30 companies that make up the Dow Jones are:

How is the Dow Jones calculated?

As a price-weighted index, the Dow Jones is calculated by adding together the prices of its constituent stocks and dividing by a number called the ‘Dow divisor’. While this divisor was originally the number of stocks in the index, it is regularly adjusted to ensure that the value of the index is not adversely affected by stock splits, changes to the composition of the index, or other modifications.

History of the Dow Jones

The Dow Jones Industrial Average was introduced on May 26, 1896 by Charles Dow, a successful businessman who also ran the Dow Jones Transportation Average. The new index originally comprised 12 of the NYSE’s leading industrial firms. However, it has since expanded to include 30 companies listed on the NYSE and Nasdaq, which represent a diverse cross-section of the industries comprising the US economy.

Since 1969, the Dow Jones has seen annualized returns averaging around 8% – though this does not take into account inflation, which would see that figure revised downwards. However, while the average annual return has been positive, there has been significant volatility between years. For example, the index rose by an average of almost 25% per year during the dot-com boom of 1995 to 1999 but fell by an average of 10% in the three years that followed. It also fell by about 34% in 2008 due to the financial crisis before rising by over 18% in 2009 as the global economy began to recover.

The Dow has historically been closely correlated with the wider S&P 500, and the two indexes move in the same direction on virtually every trading day. The below chart shows some key landmarks in the price of the Dow Jones this century and the effect they had on the index. 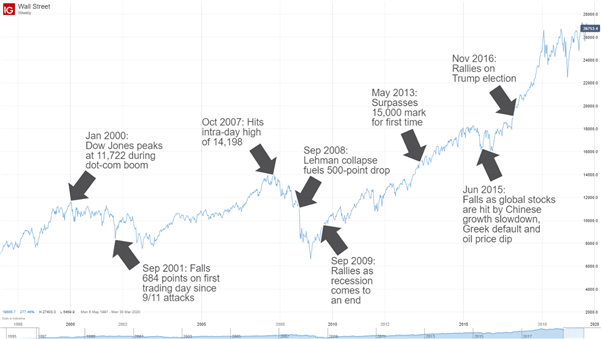 What affects the Dow Jones value?

Since the performance of the DIJA is meant to reflect the behavior of the US economy, many of the same factors which impact the economy also tend to drive the price of the Dow. For example, its price can move in response to changes in monetary policy and economic data releases. Also, major commodity prices can influence the price of stocks, in turn affecting the indexes, as well as financial crises, as shown in the chart above during the Great Recession of 2008.

How is the Dow Jones traded?

The Dow Jones can be traded through Dow Jones futures and options, and exchange-traded funds (ETFs). DailyFX also offers more technical advice on how to day trade the Dow Jones, looking at strategies, expert tips and trading hours.

The Dow Jones Index provides a useful proxy for those interested in speculating on the direction of the US economy as a whole. Here are some of the reasons why people choose to trade the Dow:

Get started trading the Dow Jones

Make sure you follow the Dow Jones live chart and read the latest news, analysis and forecasts from our seasoned market experts. For up to date stock predictions, you can also download our free quarterly equities forecast.