The Australian Dollar slipped half a cent lower after the Reserve Bank of Australia (RBA) lifted the cash rate target by a less than expected 25 basis points (bps) to 2.85% from 2.60%.

This is despite a very strong domestic economy that stands in contrast to the global economy, which the bank highlights in their statement.

Today’s decision by the RBA comes after yesterday’s building approvals data for August came in much stronger than forecast at 28.1% higher than the previous month.

This is reflective of the Australian economy which has maintained a strong fundamental position. The latest annual GDP to the end of July printed at 3.6% and the unemployment rate is steady around multi-generational lows of 3.5%.

Although base metal export prices have drifted off lately, the boom in liquified natural gas (LNG) and coal prices has compensated for them. The monthly trade balance is contributing around AUD 10 billion a month to the economy.

Australian CPI will be released on the 26th of October and this will be the key piece of evidence to determine what the RBA will do at their November meeting. With the central bank acknowledging that higher inflation lies ahead, it would seem that CPI might need to be massively higher to see another hike of 50 bps.

In the lead-up to today’s meeting, RBA Governor Philip Lowe twice said that the higher that interest rates go, the less need there is for large increases.

A well understood component of monetary policy in Australia is the relative effectiveness of changes in the cash rate target. More than half of Australian mortgages are floating rate loans and of the loans that are fixed, most of them are for less than 3-years.

This dynamic may have been the catalyst for pulling back from jumbo hikes.

The Aussie had benefitted overnight from a weakening US Dollar in the aftermath of a softening of the Institute for Supply Management (ISM) manufacturing index.

In signs that Fed’s aggressive rate hike program might be taking effect, it came in at 50.9 instead of 52.0 anticipated and 52.8 previously. This saw Treasury yields dip and Wall Street get a big leg up with the benchmark S&P 500 closing 2.59% higher.

Australian equities got a boost from the less hawkish rate move. The ASX 200 index advanced further from the strong lead from the North American session, up over 3.5% on the day at one stage, finishing 3.46% firmer on the day.

Australian bonds rallied on the decision as yields went south. Most notably, the 3-year Australian Commonwealth Government bond (ACGB) is returning more than 30 bps less, near 3.25%.

Overall, it appears that the RBA is signaling that the period of jumbo hikes and the so-called ‘front loading’ of rate increases, has come to an end. It seems that rate moves ahead will be a month-by-month scenario.

The RBNZ will be making its decision on rates tomorrow and a Bloomberg survey of economists is looking for a 50-bps hike from the current level of 3.0 % to 3.50% 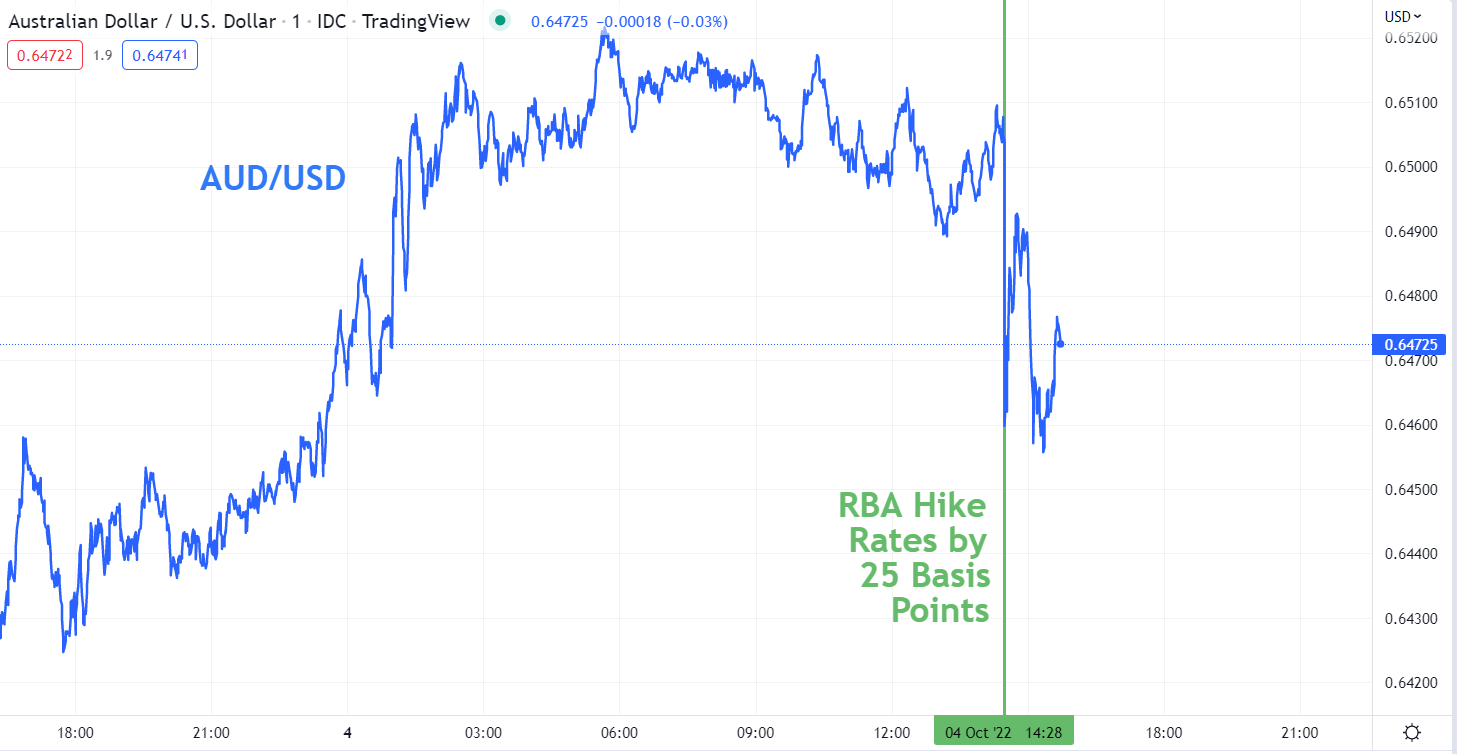