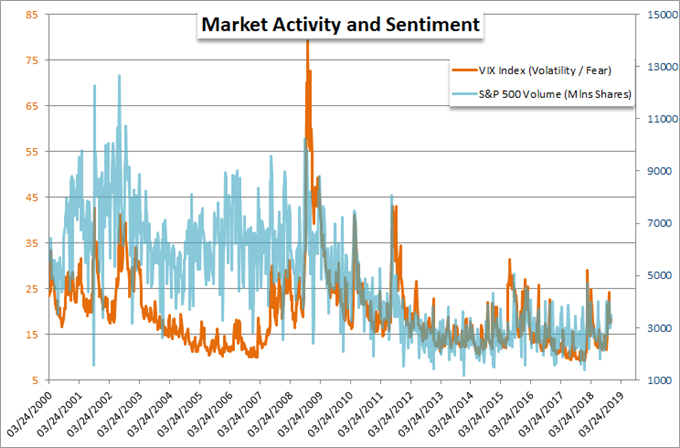 See how retail traders are positioning in the Dollar through pairs like EURUSD, GBPUSD and USDJPY as well as indices, gold and oil intraday using theDailyFX speculative positioningdata on the sentiment page.

There are Three General Market Types

There are many ways to define a market. We can look at it as more sensitive to fundamental or fundamentals. It can be qualified as an investor or speculative environment. Certain assets can be claimed to be favored over others with universal implications. However, I find one of the most appropriate designations of market type regardless of asset or regions is the qualification of conditions best defined as range, trend or breakout. Qualifying markets in this way, few traders would likely struggle to come up with criteria to identify what category an asset would fit into at any given time. Yet, recognizing these phases and establishing clear metrics to identify which we are dealing can significantly help our analysis. A trending market is one whereby there is a clear underlying direction for the market with tempo that is not readily sidetracked by congestion. Bias in response to event risk - where bullish news is leverage and bearish is downplayed (and vice versa) - can help as a fundamental litmus test. The opposite state is a range market where by progress remains elusive with relatively controlled volatility finding a reliable price span for which the market seems incapable of surpassing. As for breakout conditions, range boundaries may be in site, but the addition of volatility and growing speculative skew threatens to break the calm and establish some basis for a strong projection after the overt boundary is cleared. Normal markets pass through all three states, so it stands to reason we should be able to identify and trade through all three. That said, few traders endeavor to acclimate to this evolution and thereby put themselves unwittingly at a disadvantage.

A Systemic Backdrop Makes for a Strong Range Bias

While different currencies and different markets can experience unique and disparate states, the financial system typically supports a general backdrop by which most assets will abide at any given time. This reflects upon an environment that is unique from technical and fundamental considerations. More or less participation in financial markets, propensity for increased volatility, a channeling of capital towards riskier assets and other systemic considerations can do more to determine sustained market influence than any major technical patterns or broad fundamental theme. Taking stock of our present circumstances, it would seem rather clear that we are facing markets that are beholden to broader ranges but still exposed to higher levels of volatility. That is the general assessment drawn from the likes of the S&P 500, emerging market assets and other prominent benchmarks. What is creating this frustrating mix (most traders prefer large reversals or sustained trends)? After a decade of speculative reach promoted by central bank accommodation as much as a robust economic backdrop, we have developed a warped sense of complacency. There is a strong resistance to seeing a true collapse owing largely to habit, but recognition of troubles keeps new highs out of reach. With a laundry list of transitional fundamental themes and a thinned market awaiting clear indication of trend commitment, there is a ready channel for volatility but a high barrier to re-establishing trend. 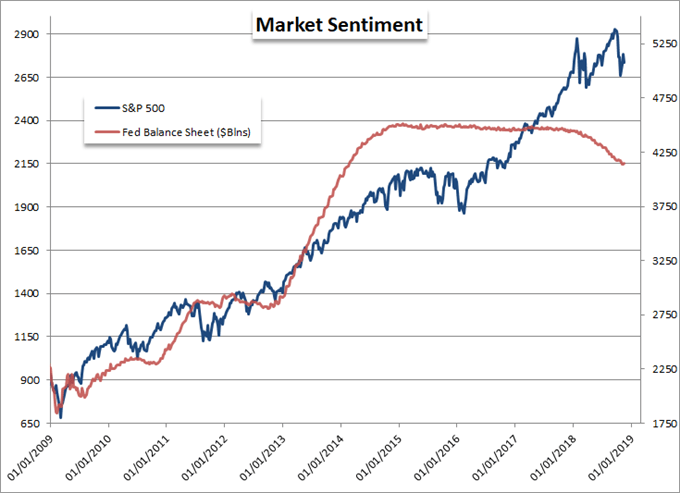 With the general status set, we can consider the world's most liquid currencies stand in the spectrum. First, the US Dollar. The world's most liquid currency is standing at the extreme end of the monetary policy curve with a hawkish policy effort that no other major central bank has come close to matching in the modern market epoch. Then again, a hawkish advantage will eventually be priced in and becomes a burden when such a significant advantage starts to deflate. Add to that mix, risk trends and the picture blurs even further. In extreme risk aversion, the Dollar is an absolute safe haven but charged speculative reach means its yield advantage is once again a prize. Lack of commitment on risk trends translates to an anchor when it comes to the USD. With these considerations, it is perhaps less surprising to see the 20-day ATR on the DXY Dollar Index drop to levels comparable to the holiday transition from 2017 to 2018 - and before that, the Summer of 2014. Expecting healthy volatility but observance of range is reasonable. For the Euro, many will reference EURUSD. Yet, when we look to an equally-weighted Euro Index, a more remarkable picture of the second most liquid currency comes into focus. Since the incredible rally through 2017 on the back of interest rate expectations, we have seen the currency only retrace a portion of its questionable gains. That said, it has made frequent and heavy visits to the same proximate support. Witch fears around ECB policy intentions and regional growth rising, this is perhaps one of the most likely currencies to establish a trend. As for the British Pound, fundamentals play an enormous role in its proclivities. Brexit is an overbearing uncertainty for the future of the currency and it is unclear just how the situation will play out. Headlines can generate sudden waves and the 'right' update can even trigger near-term breaks. Yet, short of an absolute setting for this open-ended threat, the Pound will find its convictions stall. As such, expect volatility with possible breaks but very limited follow through. We look at the market environment and trade setting for the world's three most liquid currencies in this Quick Take video.