The US Independence Day of July 4 falls on a Sunday this year, meaning that federal observations will take place between Friday, July 2 and Monday, July 5. As a result, US financial markets will be operating on a unique schedule that will result in lower trading volumes; especially after the June US nonfarm payrolls report on Friday, there might be a sharp decline in market activity.

Those conditions may persist into next week as the Euro cup semifinals are on Tuesday and Wednesday. Truth be told, financial markets may be entering a window where the base level of activity is quiet until Monday, July 12, when earnings season begins in earnest.

Based on the data received thus far this week, per the Atlanta Fed, “the nowcast of second-quarter real gross private domestic investment growth decreased from 13.1 percent to 6.8 percent.” The next update to the Atlanta Fed GDPNow 2Q’21 growth forecast is due out later today, with another due out tomorrow after the June US NFP report.

A Closer Look at the June US Nonfarm Payrolls Report

The main issue when it comes to the June US NFP report is whether or not the US labor market regained its momentum after a stumbling in back-to-back reports in April and May. The April print came in at +266K against an expectation for +1000K (or +1M) jobs added, while the May reading registered +559K versus 650K expected.

The fits and starts of the US economy fully reopening don’t seem to be dissuading forecasters from projecting a rebound in US labor market prospects, as falling jobless claims and rising vaccination rates bode well for US labor market potential. The consensus calls for jobs growth of +700K, while the unemployment rate (U3) is anticipated to drop from 5.8% to 5.7%. Meanwhile, the US labor force participation rate is due in at a meager 61.7%. 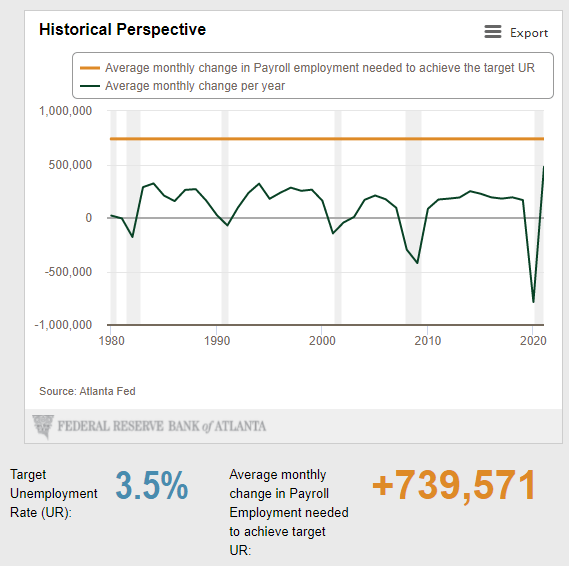 Even if there are good jobs data, there is still a long ways to go before the US reaches ‘full employment’ as experienced pre-pandemic, which According to the Atlanta Fed Jobs Growth Calculator, the US economy needs +740K jobs growth per month over the next 12-months in order to return to the pre-pandemic US labor market of a 3.5% unemployment rate (U3) with a 63.4% labor force participation rate.

The expected data aren’t numbers that would provoke the Fed to shift its current stance over the summer months; taper talk won’t begin in earnest until at least Jackson Hole in August or the September FOMC meeting.

There’s been a lot of conversation around the perceived timeline of the Federal Reserve’s plan to taper its asset purchases, a discussion likely to be revived regardless of the outcome of the June US NFP report. This is in part thanks to sustained high levels of activity across the Fed’s open market desk, which hit a new all-time high at $991.939 billion at the end of the month and quarter yesterday.

In consideration of these facts, it appears that market participants have the taper timeline priced as such: