Morning Market Minutes: Bitcoin and the Knicks; Fed's RRP; US NFP Next Week

It’s Been a Long Time

Forgive me for taking a moment to revel: last night, the New York Knicks won their first playoff basketball game since May 26, 2013. It’s been a long 2,923 days. A lot has changed since then. In fact, during that timespan, financial markets have risen and fallen with significant fervor. As noted on Twitter this morning:

That’s right: Bitcoin has gained nearly +31,000% over the past 2,923 days. Amazon and the broader Nasdaq 100, in all their tech-oriented glory, are up a paltry +1,143% and +357%, respectively, during that timeframe. No wonder long-time Bitcoin bulls, and cryptocurrency market enthusiasts altogether, are riding out the recent wave of volatility; it’s just another small bump along the road.

But there’s another story contained with the New York Knicks playoff victory last night: Madison Square Garden was packed with 15,000 attendees. New York City, the American epicenter of the coronavirus pandemic, is returning to normal. The NYC metro area accounts for approximately 12% of the entire country’s GDP. Good news for the NYC economy is good news for the American economy, plain and simple. 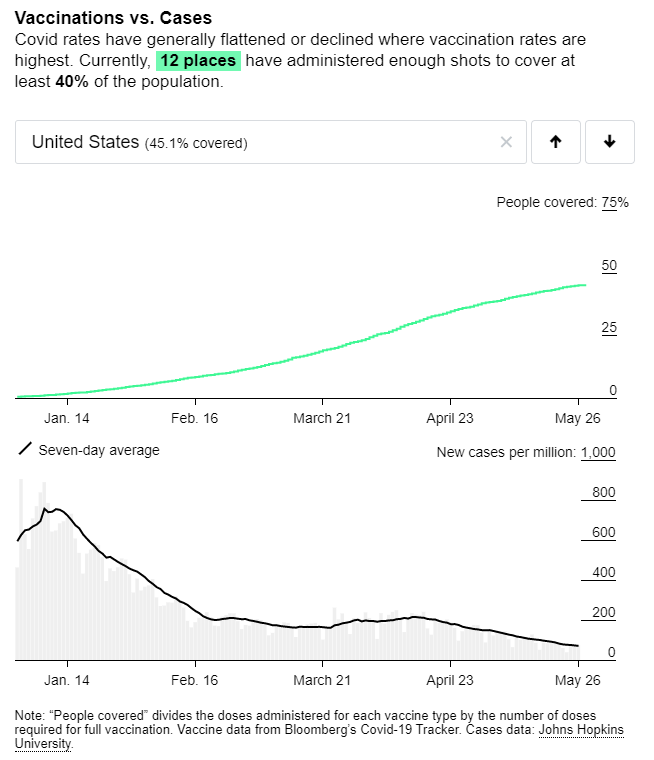 There’s been a lot of chatter in recent days about the volume of reverse repurchase agreements (RRP) at the Federal Reserve’s open market deck in recent days. In fact, just yesterday, we saw the highest volume of RRP, just north of $450 billion, since December 30, 2016 ($468.36 billion). That’s a big scary number, right?

The answer isn’t so simple. This means prime brokers and certain other qualified entities are flush with capital and need a place to park it. If the Fed’s open market desk was conducting repo agreements to facilitate its QE program, then reverse repo agreements are the opposite of QE: the Fed is draining liquidity from the system. In the context of the ‘runaway inflation’ narrative, the heavy volume of RRP in recent days may be interpreted as an early taper.

Considering various Fed officials have been teasing about a timeline for taper talk, the volume of RRP is worth monitoring heading into the June Fed meeting – but that’s about it. Financial markets are barely reacting to the liquidity drain: the DXY Index is trading at the same levels it was this time last week; the US Treasury 10-year yield has been bounding in the same place for the past two-months. We’ll have more to say about this tomorrow.

Things are quieting down in financial markets as the summer season beckons: with the US Memorial Day around the corner coupled with the UK bank holiday on Monday, we’re now entering one of the lower liquidity periods of the year. ‘Sell in May and go away’ may be nonsense recently, but coming out of the pandemic, there may be reasons to believe that increased mobility data will signal lower trading volumes across financial markets.

If trading volumes are due to thin out of the next few days, we may see a temporary reprieve at the end of next week. After all, with the May US nonfarm payrolls report due on Friday, we’re getting another significant data point that the Federal Reserve – as well as market participants – will use to justify or negate their belief system and biases. Liquidity conditions should normalize by mid-week in anticipation of Friday’s data.